Three NSW council areas that suffered more than $300 million in economic damage from last year’s bushfires did not receive any funding from a state and federal program as the Berejiklian government prepares to defend the scheme by arguing the vast majority of destruction occurred in Coalition-held seats.

NSW Deputy Premier John Barilaro has also confirmed to the Parliament that the $177 million Bushfire Local Economic Recovery fund – which has been criticised for favouring Coalition electorates – was distributed without any application forms in order to “get funding flowing as quickly as possible”. 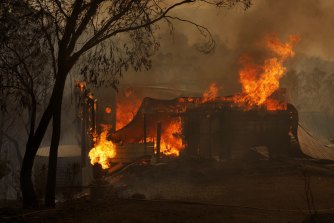 The latest controversy around government grants will put pressure on Mr Barilaro, who is responsible for bushfire recovery, when he faces a parliamentary inquiry on Monday. Mr Barilaro agreed to appear before the grants inquiry when it was investigating the Stronger Communities program but it has since been expanded to include the bushfire fund.

Ahead of his appearance, Mr Barilaro has written to Greens MP David Shoebridge, who chairs the inquiry, saying he felt “a sense of utter disgust in the decision to politicise” bushfire funding. Mr Barilaro said Rural Fire Service data shows that more than 90 per cent of buildings damaged and destroyed by the fires were in Coalition-held seats.

Mr Barilaro will be asked about government maps, which show the worst hit areas in terms of economic impact from the fires were Shoalhaven, Bega Valley and Snowy Valleys councils, totalling more than $750 million. All are in Coalition-held state seats. However, the maps show other areas also suffered extensive damage to property and businesses, including the Central Coast which suffered a $163 million economic impact but did not receive any financial help.

In contrast, Wagga Wagga Council, in a state seat held by an independent after the Liberals lost it in a byelection, had an estimated $16 million impact from the fires and received $40 million in funding. The Blue Mountains, which took a $65 million hit, also did not receive funding despite also meeting the criteria of “high impact” because more than 100 of its buildings were destroyed or damaged.

Blue Mountains Council has been particularly critical of the fund after 24 proposals for local projects worth $5.4 million were rejected, ranging from fire station upgrades to revitalising town centres. Mayor Mark Greenhill said the government’s assessment of the economic impact on the Blue Mountains was far too low and failed to consider the impact on tourism for many months.

“We lost the same number of homes as the Hawkesbury, we lost 70 per cent of our world heritage area, fire crews were out day after day, night after night and we were surrounded by fire from three sides leaving our communities traumatised so surely Blue Mountains deserved something,” he said.

Byron council area suffered more than $88 million in economic impact but was also not funded.

Mr Shoebridge said taxpayers across NSW wanted “answers and accountability” around the awarding of grants.

“On the government’s own analysis, the Greens’ seat of Ballina and the ALP seats of Blue Mountains and Central Coast between them took a collective $317.5 million hit from the fires and they didn’t receive one cent of bushfire relief funding,” he said. “It’s essential the Deputy Premier explain how hundreds of millions of dollars of public money have been allocated by his office with such an extraordinary bias towards Coalition seats.”

Labor leader Jodi McKay said it was another example of “pork barrelling gone too far”.

In November, the federal and state governments announced $177 million had been fast-tracked to 71 projects under the Bushfire Local Economic Recovery fund. Mr Barilaro said the funding was announced by Prime Minister Scott Morrison and “even Blue Mountains Council are now admitting they were contacted about the first round”.

“The Commonwealth then wrote to the states asking for priority, shovel ready infrastructure to get funding flowing as quickly as possible,” Mr Barilaro said.

He said an “open round” worth $250 million “has been widely advertised and an email from our office was sent to every MP that the program is relevant to”. Applications closed on January 28.

“All the projects funded to date have been transparently placed on the government’s website,” Mr Barilaro said.

Mr Barilaro has asked Mr Shoebridge “to come on the road with me and see the NSW government’s fire recovery efforts with your own eyes”.

Tags: a, areas, bushfire, That, THE, Took
Recent Posts