The home wants to keep it that way – but the federal government’s troubled vaccination rollout is not helping. None of the home’s residents or staff have yet received their first shot. 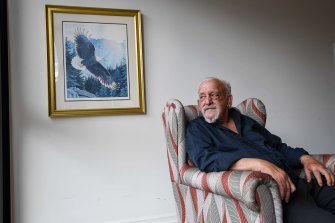 Graham Townsend, who lives at St Kilda’s Sacred Heart aged care home, has not yet been vaccinated.Credit:Joe Armao

“The vaccine gives a lot of people here hope,” said Mr Townsend, whose home will on Thursday be visited by federal Opposition Leader Anthony Albanese. Labor is hoping to draw as much attention as possible to a vaccine program Mr Albanese describes simply as “a shambles”.

“A lot of our residents are very anxious,” said Mr Townsend. “Keeping our mob together has been very hard, but we’re looking forward to having our vaccine shot and getting on with our old lives.”

In February, the Morrison government said that about 2500 aged care homes across the nation would be vaccinated by April.

Under federal Health Minister Greg Hunt’s original schedule, unveiled in February, the first phase of the vaccination program targeted vulnerable groups including those in aged care who would get their first jab “over the coming six weeks”. 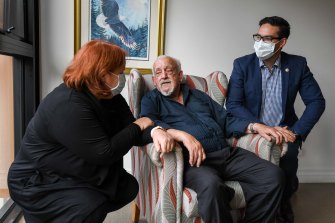 Josh Burns is the federal MP for the area covering St Kilda, and said that his office had also been contacted in recent days by other homes “concerned about the lack of pace” on vaccinations.

“There are some dates being set for some centres but most of those dates are in May, and that’s just the first jab,” he said. “That’s not the staff, that’s just the residents – staff are being told to go to the GP. And of course they can’t get in.”

He said the Morrison government and Mr Hunt were “running a line” about changes to use of the AstraZeneca vaccine being one of the reasons the rollout was not running smoothly.

“That’s absolute nonsense. Way before any change in medical advice, the federal government was already way behind. They’ve now just decided to drop all semblance of targets.”

On Wednesday The Age asked Mr Hunt why it had taken three months to arrange the first vaccination in some aged care homes including Sacred Heart.

Mr Hunt’s office pointed to comments by Health Department secretary Brendan Murphy last month, who said that “the overwhelming determining factor of the pace and scale of the rollout is vaccine supply”.