The Victorian Liberal Party says it will confront one of its controversial upper house MPs over pro-Trump conspiracy theories he shared on social media while rioters stormed the US Capitol in Washington on Thursday.

David Davis, the Leader of the Opposition in the Legislative Council, said he "fundamentally" disagreed with his colleague Bernie Finn, and that his posts on his private Facebook page were "wrong". 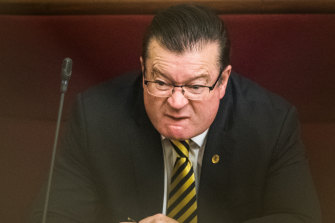 The Victorian Liberals will “talk” to Bernie Finn about his pro-Trump posts. Credit:Jason South.

Mr Finn, who is also the opposition whip in the upper house, attracted criticism from some members of the Liberal Party after he shared several pro-Trump posts in the lead up, during and after the riots in Washington.

Mr Davis did not go as far as condemning Mr Finn, but said the Liberal Party would "certainly be talking to" him about his comments. He was asked what action the party would take against Mr Finn, but did not answer.

"I don't know why Bernie has made those comments," Mr Davis said.

"People are allowed to speak, but, having said that, I think it's incumbent on us to say when we think they're wrong."

On Wednesday evening, before the violence had erupted, Mr Finn shared a lengthy post reiterating false claims of election fraud and wrote that US President Donald Trump had "set a wonderful example to every other national leader by putting America first".

"Within the next 12 hours, Donald J. Trump will make history for one of two reasons: 1) He will fight off a concerned effort by globalists, big corporations, big media, the Washington Establishment and the mad Left to improperly remove him from the Oval Office," Mr Finn said.

"Or, 2) He will succumb to the aforementioned Deep State forces – but not before exposing the massive corruption undermining the American political system."

As rioters tore through the Capitol, Mr Finn shared an image of former US president Ronald Reagan and an excerpt of one of his speeches.

"The people of the United States would be well advised to remember these words of a very wise man and great president," Mr Finn wrote.

"Freedom is never more than one generation away from extinction," the excerpt of Reagan's speech began. "We didn't pass it to our children in the bloodstream. It must be fought for, protected and handed on for them to do the same, or one day we will spend our sunset years telling our children's children what it was once like in the United States where men were free."

On Thursday afternoon, Mr Finn also shared an article to his private Facebook page from the conservative news website Washington Times that claimed a facial recognition technology company had identified members of far-left group Antifa who had "infiltrated Trump protesters who stormed Capitol".

In the post, Mr Finn wrote: "This shouldn't surprise anyone. This is far more Antifa than Trump."

The Washington Times has since issued a correction to its news article to state the technology "did not identify any Antifa members".

Tags: Be, confront, Liberals, Victorian
Recent Posts
We and our partners use cookies on this site to improve our service, perform analytics, personalize advertising, measure advertising performance, and remember website preferences.Ok