Treasurer Josh Frydenberg has angrily dismissed a threat by social media giant Facebook to ban news from its platform in Australia, warning the govenrment will not respond to coercion.

Facebook on Tuesday said it was prepared to ban news from being shared on its main app and Instagram in Australia in response to a new regulatory code that would force it and Google to pay publishers for content. Google has also pushed back against the code. 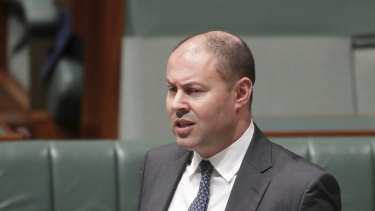 "Australia makes laws that advance our national interest. We don’t respond to coercion or heavy handed threats wherever they come from" Mr Frydenberg said. "Our reforms to digital platforms are world leading and following a ground breaking 18 month inquiry by the ACCC. These reforms will help to create a more sustainable media landscape and see payment for original content."

"Facebook’s threat today to prevent any sharing of news on its services in Australia is ill-timed and misconceived," Mr Sims said. "Facebook already pays some media for news content. The code simply aims to bring fairness and transparency to Facebook and Google’s relationships with Australian news media businesses."

Mr Frydenberg announced plans to introduce a compulsory code to regulate the platforms in April. The first version of the code, announced by the ACCC in July, gives Google and Facebook three months to negotiate revenue-sharing deals with media companies before an independent arbitrator is called in to impose a compulsory arrangement. The code also asks the tech giants to give advance notice of algorithm changes and information on how and when Google and Facebook make data available for publisher.

Facebook slammed the new code on Tuesday morning, threatening to block news content on its site in Australia. Local managing director Will Easton said the choice was either removing news entirely or letting publishers charge large amounts of money for content. The response by Facebook was similarly to a public outcry by Google made a few weeks ago.

"Assuming this draft code becomes law, we will reluctantly stop allowing publishers and people in Australia from sharing local and international news on Facebook and Instagram. This is not our first choice – it is our last," Mr Easton said.

"As today’s announcement reminds us, the tech giants have a history of making heavy handed threats," Mr Fletcher said. "But this will not distract us from our careful, thorough, fact-based public policy process. "The Government remains committed to the introduction of a mandatory code to address bargaining power imbalances between digital platforms and news media businesses."

Facebook's attack was also slammed by Nine Entertainment Co (owner of this masthead) and the industry body for television, Free TV.

"We find it a strange response as it is a demonstration of Facebook’s use of its monopoly power while failing to recognise the importance of reliable news content to balance the fake news that proliferates on their platform," a Nine spokesperson said. "We are ready to engage and hope to come to a constructive outcome with Facebook which will work for both of us and importantly the Australian community."

Free TV chief executive Bridger Fair said Facebook users were being held to ransom as part of an effort to intimidate the government.

"This type of bullying behaviour is exactly the reason that the ACCC concluded that the Mandatory Code was the only reasonable way to even up the bargaining power between Facebook, Google and Australian news media businesses," Ms Fair said.

"Facebook is already awash with fake news and conspiracy theories. Removing trusted Australian news from their platform will only serve to allow misinformation to be further spread unchecked and unchallenged. Unfortunately Australian consumers will be the collateral damage in Facebook’s campaign to hold onto monopoly profits."

Tags: coercion', Don't, respond, to, We
Recent Posts
We and our partners use cookies on this site to improve our service, perform analytics, personalize advertising, measure advertising performance, and remember website preferences.Ok