The stores are full of promises of comfort and joy — a pair of fancy sweatpants, some box fresh sneakers, a shiny new kitchen gadget, a cozy new blanket. In a year of economic and social turmoil, brands are banking on the holiday to make up lost profits, and shoppers are hoping they can buy themselves some winter cheer to light up an otherwise dark year. Most of this wishful buying and selling is happening online.

“My mom and I would always go out on Black Friday. This was the first year that we didn’t so I have purchased every Christmas gift online,” said Anne Cnockaert, in Ypsilanti, Michigan. Like millions of other people, the 38-year-old tech employee said social distancing during the global pandemic transformed her shopping habits. “It has been a little strange doing it all online, but it’s kind of fun to get the packages,” she said.

What sparkles online, however, doesn’t always have the same appeal when we rip open the package.

Retail e-commerce sales for the third quarter of 2020 are estimated to amount to $209.5 billion, a nearly 37% increase over the same quarter in 2019. But every internet shopping parcel that gets delivered runs a high risk of being sent back. This risk increases as a result of unwanted Christmas gifts, with an estimated $41.6 billion worth of merchandise returned this time last year.

In Boise, Idaho, Greg McRoberts is one of the people dealing with the unprecedented surge in online shopping. His delivery logistics company, Verde Fulfillment USA, stayed open as an essential service: “By March 15, all of a sudden, we started seeing our order flow increase dramatically. From there it has not stopped — we’ve had 180% increase in orders since COVID hit, compared to the previous year.”

McRoberts said Christmas shopping has accelerated orders even more. “Right now, you have every major freight company backed up by at least 10 days, they are 60 to 70% over capacity,” he added.

Of these orders, some 15% to 30% will be sent back, even more if they’re clothing. With no consistency in sizing, and thanks to fast fashion and fast shipping, shoppers often fill their online carts fully expecting not to keep what they order. 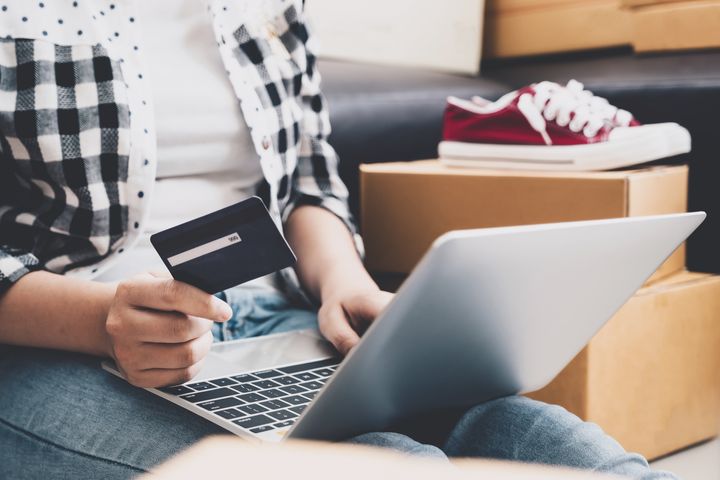 “Return rates for e-commerce are typically three to four times higher than if you’re shopping at a brick-and-mortar store,” says David Sobie, founder of returns management company Happy Returns, which handles online returns for companies and aims to smooth the process for customers by providing special drop-off points across the U.S. “If I’m buying something from my phone, for example, it can be hard to tell if something is black or gray or charcoal or heather — so maybe I’ll just buy all of them and try them on at home to see which I like.”

Unwanted items are more than just a logistical problem — they have the potential to become a mountain of waste. Many returned items are sent to a landfill or destroyed, for the simple reason that throwing items away is cheaper and easier for companies than trying to resell them.

Returns make up some of the billions of pounds of unsold products thrown into landfills or destroyed each year. An undercover investigation in an Amazon warehouse in France found staff threw away 300,000 items ― including boxes of Playmobil and Lego products, diapers, and popcorn machines ― in just three months in 2018. Based on this figure, experts believe Amazon throws away 3.2 million manufactured objects per year in France alone. At the time, Amazon responded by saying only a small fraction of items are destroyed and it was working “to reduce the number of products for which there was no other choice but to destroy them.”

The fashion industry — which produces 100 billion clothing items in a year, of which 20 billion will not be sold — is notorious for destroying product. In 2018, British clothing brand Burberry faced public anger when it was caught incinerating $36.8 million worth of clothes, bags and perfume, a tactic high-end brands use when they fear resales or lower price points would tarnish their image. Similarly H&M was found to have burned 60 tons of unsold clothing between 2013 and 2017. (Burberry says it no longer destroys unsellable finished products and H&M told HuffPost that only garments that do not fulfill safety regulations are destroyed, as “an absolute last resort.”)

Tossed textiles are an ecological nightmare — a waste of resources, a source of pollution, and another cause of overflowing landfills the world over. Some 17 million tons of textile waste was generated in the U.S. in 2018, according to the U.S. Environmental Protection Agency — 5.8% of all the municipal solid waste created that year.

“We do not know how much unsold inventory is being destroyed,” said textile expert David Hachfeld at the Public Eye nongovernmental organization in Switzerland. Most corporations remain tight-lipped on the topic, he said. “My impression is that companies who don’t say anything might in fact throw away a lot of things, especially the cheap items. But the current situation is that we cannot prove any of this, we just do not know,” he said.

What happens to returns all depends on the brands, said Verde Fulfillment’s McRoberts. Some brands want the returns sent back to them or made ready for resale, but sometimes, he said, it is cheaper for them to throw away the product.

“I hate that. I do not support that,” McRoberts said. “But ultimately we will do what our brands want.” 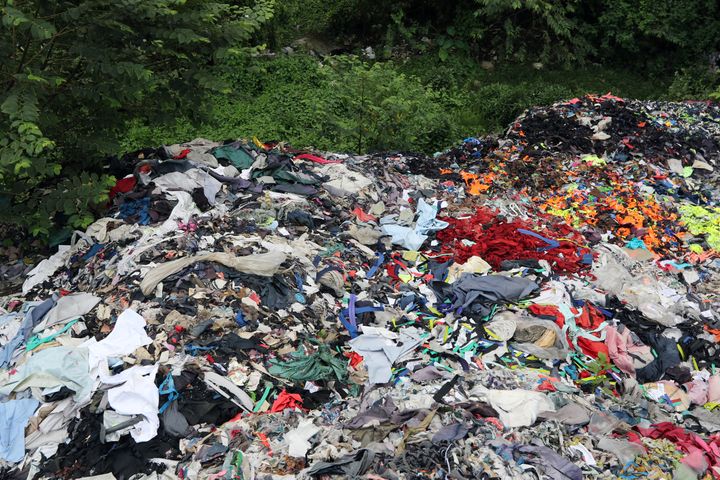 Dealing with product returns is the hardest part of running a brand, said McRoberts — get it wrong and you risk having your social media channels swamped by angry customers. But customers are blithely unaware of the complexities involved in taking returns. The system varies from company to company, but typically a returned item may get shipped to a processing depot, where it is sorted and its condition assessed. From there, it may be sent back to the store or e-commerce warehouse to be restocked — or repaired and then sent back. If it’s determined it won’t be sold again, it’s shipped to a discount retailer, marked as a charitable donation, or just thrown away. It’s a pricey logistical headache that companies like Happy Returns and Verde Fulfillment take on for their clients.

At Happy Returns, Sobie has found a lot of the businesses he works with want better options than just throwing things in the trash. “It could be liquidation. It could be donation. 95% of what we take in ends up being resold, or refurbished and then resold, meaning it doesn’t end up in the landfill,” he said.

Both Verde Fulfillment and Happy Returns send as much unwanted stock as possible to charities. McRoberts lists footwear, clothing, electronics and even boxes of ski equipment as items that are handed over to local charities.

Tech company Optoro developed an algorithm to determine the “next best home” for a returned or overstocked item and send it on its way — whether that means selling it straight to a consumer or a resale business, donating it to a charity, or sending it to a recycling plant.

B-Stock, the world’s largest marketplace for unsold goods, matches brands that have unsold stock ― like Walmart, Macy’s or Dick’s Sporting Goods ― with businesses that buy up this merchandise for resale. “We sold 110 million products across our platform this year; giving these items a second life and potentially saving them from a landfill,” a company representative said in an email.

Amazon — which has logged record sales during the pandemic and accounts for some 40% of online sales — drives an enormous amount of buying, selling, returning and waste. To help keep some of the tidal wave of stuff from going to landfills, Amazon recently started a program where third-party sellers can donate their returns or excess stock for charitable giveaways rather than throw them away. In November, Amazon announced 20 million items had been given away through charitable networks including school supplies, household appliances and clothing. 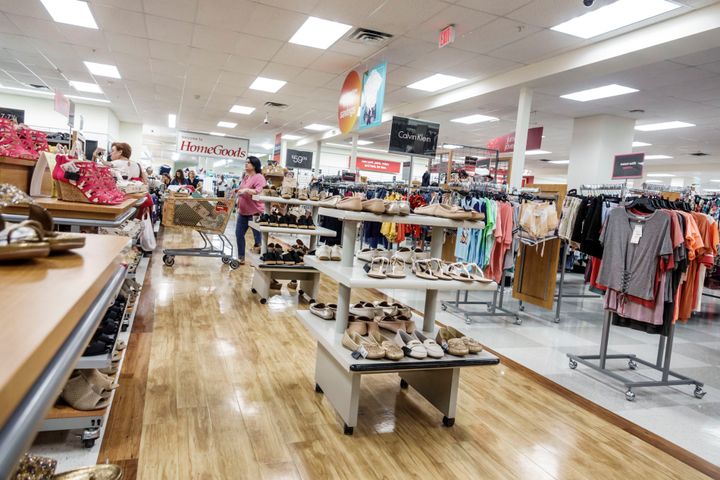 To avoid the hassle of returns, some companies prefer to let go of unwanted items. When Anne Cnockaert bought a sweater for her dog online and it ended up being too big, she was told not to send it back. “I called [the company] up and they said, ‘Do you know someone, or a local animal shelter, you can donate the sweater to?’” she said.

A host of virtual try-on apps, such as Bigthinx, are trying to stop clothing returns before they happen — by helping people find clothes that will actually fit. Using two smartphone photos and body scanning technology, the startup’s software takes 44 body measurements to create a bespoke avatar that can virtually try on clothes for you, ruling out items that aren’t likely to work out.

Some experts are calling for legislation to regulate how unsold goods are handled. “Most governments still see the market as something detached from democracy, where they should not interfere. But democracy can help us to set rules and ensure resources are used in a responsible way,” said Public Eye’s Hachfeld. “We should prohibit destroying goods that are good to be used but are burnt just to clear the shelves for the next short-lived fast fashion collection.”

This is already happening in some countries. In 2016, France passed a law forcing supermarkets to donate food rather than dumping it. This was followed in January 2020, by wide-ranging anti-waste legislation that outlawed the destruction of unsold or returned non-food items including electronics, clothing and cosmetics. Such items must instead be reused, redistributed or recycled.

“I don’t think we can as consumers be exempted entirely,” says Kate Soper, author of “Post-Growth Living.” “But I think the main cause of excessive consumption, and the amount of waste it generates, is the economic order we’ve got. Capitalism needs to realize profits in order to continue, and profits depend on a continuous supply of new products or services — quite a lot of it is not actually gratifying any genuine need and it’s creating an environmental catastrophe.”

With the weight of human-made materials now equal to that of all life on Earth, there is a growing sense that something must be done about the objects being buried or burned for profit. Much was made at the start of the pandemic about a global pause and the chance to reevaluate what really matters in life. But this desire for simplicity has been drowned out by a commercialized retail drive that promises shopping as happiness, entertainment and salvation all rolled into one.

In the maelstrom of hundreds of thousands of holiday packages whirling from coast to coast, McRoberts is urging patience and calm: “Consumerism has gotten kind of out of hand, and we all need to learn to pull it back just a little bit. Purchase what we truly need and be grateful for what we have … be grateful for health and for your friends that you can talk to online. Because you know, what you ordered online is just a material object.”

HuffPost’s “Work In Progress” series focuses on the impact of business on society and the environment and is funded by Porticus. It is part of the “This New World” series. All content is editorially independent, with no influence or input from Porticus. If you have an idea or tip for the editorial series, send an email to [email protected].

Tags: Amazon, impact, Shopping
Recent Posts
We and our partners use cookies on this site to improve our service, perform analytics, personalize advertising, measure advertising performance, and remember website preferences.Ok