A woman  has revealed she’s worried that her husband might be cheating, claiming that she’s become suspicious about his grooming habits.

Writing anonymously on Netmums, the British woman, explained that her husband hasn’t done any ‘manscaping’ since lockdown began in March, but has made an effort to groom himself ahead of going back to work.

She said her husband works in an office where he is alone with one woman in the morning and another in the afternoon.

Adding that her husband got quite involved with a colleague around eight years ago, a stream of commenters debated if he’s having an affair. 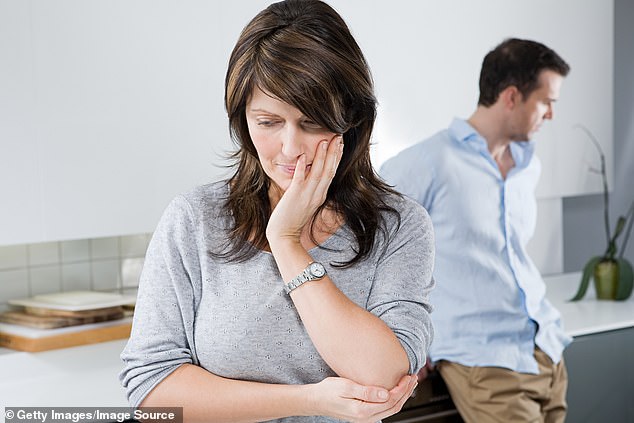 A woman who is concerned that her husband is having an affair, revealed he’s begun grooming his body ahead of returning to work (file image)

Posting anonymously on Netmums, the woman explained her husband has previously been involved with female work colleagues

The woman explained that her husband usually shaves his private area every six weeks, but stopped grooming during lockdown.

She explained that he’d been asked to return to work by his boss, and that there will be  only two people in the office at a time.

‘So it’s him going to be alone with one woman in the morning and another in afternoon,’ she said. ‘Anyway skip to tonight and he’s in the shower shaving away, which to me seems coincidental that he’s back to work next week. Am I just being a paranoid freak?

‘I also wanted to add about 7/8 years ago he was getting quite involved with a female work colleague that he said was a man, and a text from her that implied he had sent a sex text to her.’

A stream of responses agreed the husband’s behaviour is suspicious and shared their own experiences of being cheated on.

One person wrote: ‘You might have to talk to him and accept that he’ll be difficult about it, but once he knows you’re not going to let it go because of his history he has to talk to you. I hope it’s innocent.

‘My ex husband was acting like this for near on a year I knew he was shaving there before work and not for me, and cagey with his phone. Distant but sex life was still OK. He didn’t go out in the evening, so was bothered but not worried enough to tackle it.

‘I asked him if anything was going on kept denying it. It kept nagging at me so I’m not proud of it and it was the first time I did i,t but I checked devices. Unfortunately I found a week colleague’s name. I found her on Facebook and messaged her and she confirmed they had been having sex in their lunch hour breaks for nearly a year.’ 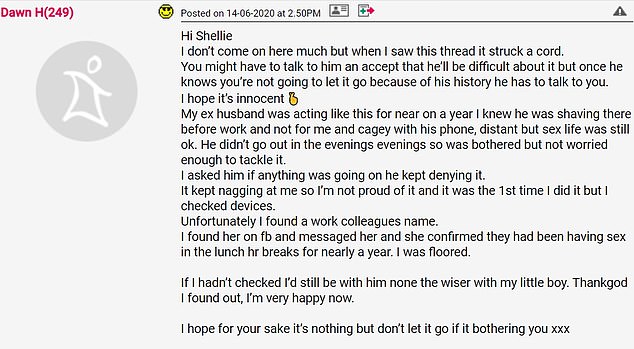 Another added: ‘I have to say this seems extremely suspect. I’m a 48-year-old guy and coming from a guy’s perspective this rings alarm bells. Most men manscape on the basis of keeping things neat and tidy not only for personal hygiene but to look tidy for your partner.

‘This being said, if he routinely manscaped and then just stopped during lockdown and then starts right up again prior to going into work, I would not hesitate to say he is probably cheating. You know your man, so trust your gut.’

Arguing that grooming isn’t a sign of cheating, one wrote: ‘He’s going back to work, back to routine. He’s probably just picking up his grooming schedule from before! Cleanly shaven “down there” is something a lot of us prefer to be, but it’s a pain in the *** to do. I bet loads of people have neglected themselves a bit on the personal care front.’

Another said: ‘I agree, he’s probably just doing it to get back into a routine again with his grooming. If you’ve nothing else suspicious then it’s hard to tell.’

Tags: Fears, Hav, her, Husband, is, Woman
Recent Posts
We and our partners use cookies on this site to improve our service, perform analytics, personalize advertising, measure advertising performance, and remember website preferences.Ok