A grieving mother has revealed her at heartbreak at losing her twin daughters after medics failed to offer preventive care against the effects of cervical treatment she’d undergone four years earlier.

Despite the treatment leaving her at risk of giving birth prematurely, the mobile hairdresser says she wasn’t warned about the side effect, and so missed the opportunity for a successful cervical stitch.

The procedure, if performed early enough, could have prevented Chloe’s twin daughters from being born prematurely at 24 weeks on June 3 last year, and developing complications which saw them die within weeks of each other. 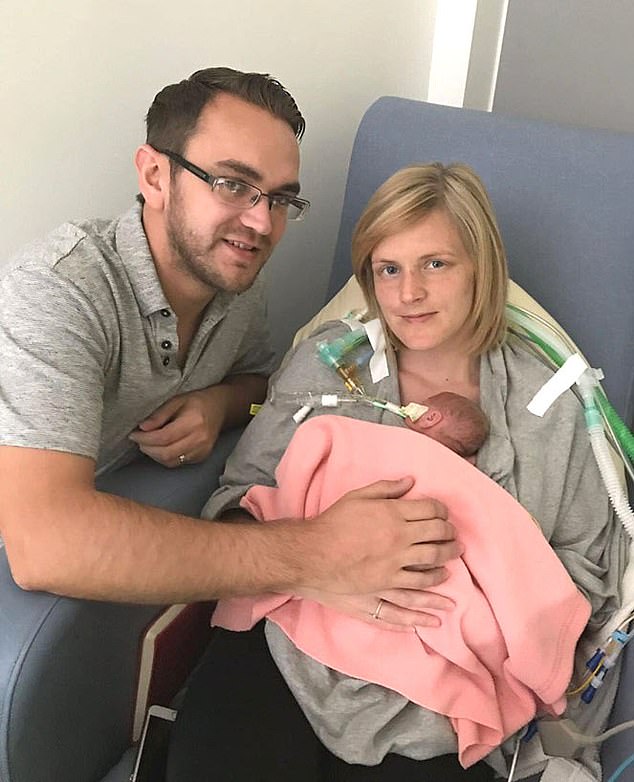 Chloe Turner (pictured with baby Alice and her husband Chris), 30, from Burton Latimer, Northamptonshire, has revealed the heartbreak of losing her twin daughters

Chloe, who married her husband Chris in 2017, said: ‘In the space of a few weeks we’d gone from being expectant parents to having that whole future snatched away from us.

‘All the plans we’d made were left in tatters. I can’t begin to explain how much it hurts.’

‘Losing the girls was agony, but this isn’t about trying to find someone to blame. I just want to make sure our daughters are remembered and had a purpose – and to ensure other parents don’t suffer like we have.’ 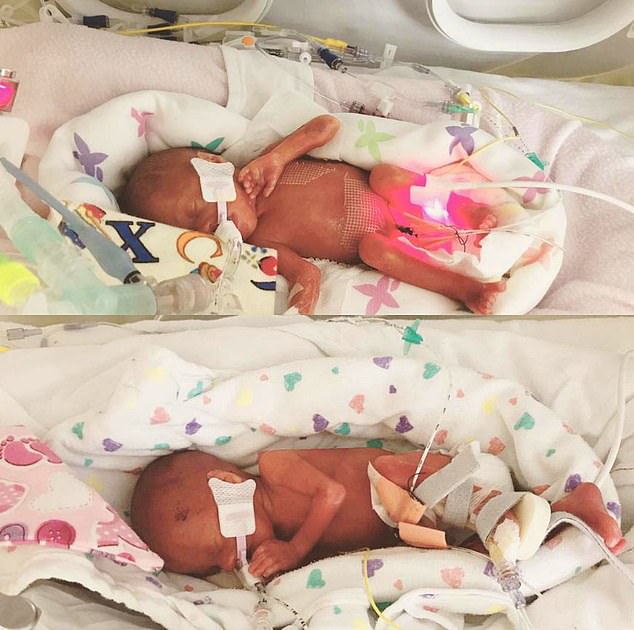 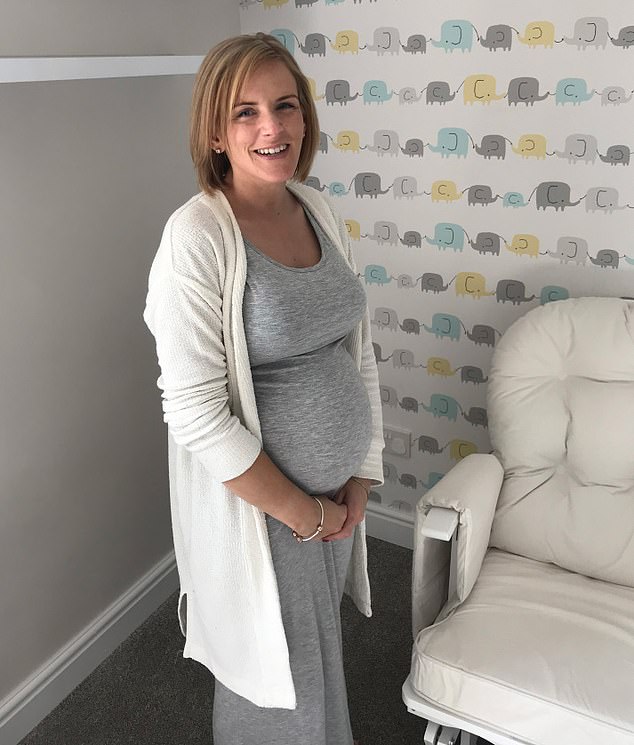 The treatment uses a wire loop with an electrical current passing through it which cuts away affected tissue and seals the wound.

Online NHS guidance warns the procedure carries a small risk of premature birth in future pregnancies as it reduces the cervix’s ability to keep the foetus in the uterus.

But one in five women are not warned about possible impacts, according to the Not So Simple report by Jo’s Cervical Cancer.

What is LLETZ and why is it linked to premature birth?

The most common treatment for abnormal cervical cells is large loop excision of the transformation zone (LLETZ).

It can be carried out at the same time as a colposcopy and is usually done while you’re awake – local anaesthetic is injected into your cervix to numb it during the treatment.

Women who have undergone this or any other procedure that involves the removal of cells from the cervix before pregnancy, are at higher risk of having a late miscarriage or premature birth (before 37 weeks).

The level of risk depends on the extent of the procedure that was carried out. Evidence shows that in cases where the excision is more than 10mm, or if more than one procedure has been carried out, then the risk is increased.

Chloe recalled: ‘I remember being given a leaflet explaining the procedure, but I was never told about side effects.

‘My biopsy test results came back saying there was no cause for concern, so I just put it behind me and got on with life.’

After marrying warehouse worker Chris, 32, in 2017, and honeymooning in Bali, the pair decided to start a family. 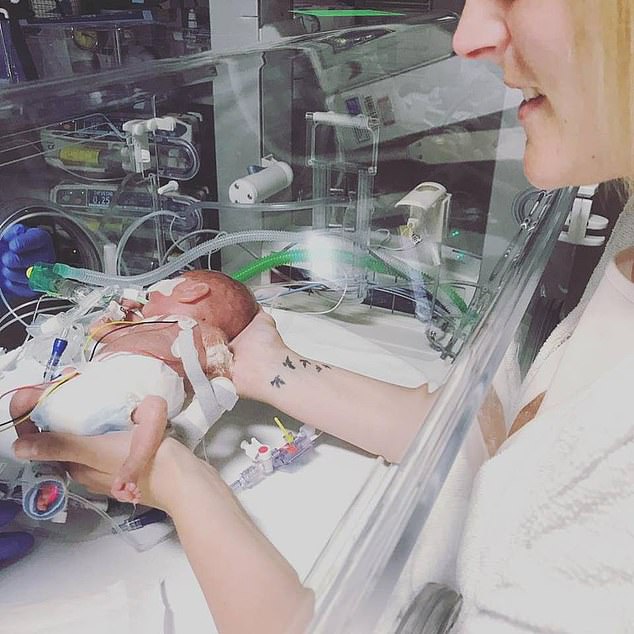 Despite the treatment leaving her at risk of giving birth prematurely, the mobile hairdresser (pictured holding Amelia) says she wasn’t warned about the side effect and so missed the opportunity for a successful cervical stitch 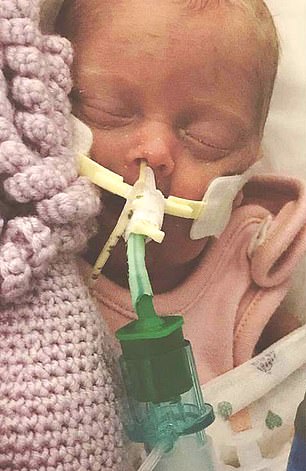 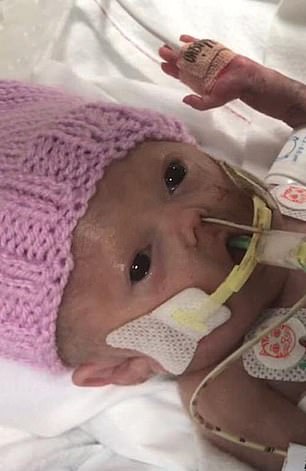 The procedure, if performed early enough, could’ve prevented Chloe’s twin daughters (pictured) from being born prematurely at 24 weeks on June 3 last year, and developing complications which saw them die within weeks of each other

‘We were both overjoyed when I fell pregnant the first time and couldn’t believe it when we were told at the 14-week scan that I was carrying twins,’ Chloe said.

HOW A STITCH IN THE CERVIX CAN HELP PREVENT MISCARRIAGE

A cervical stitch is also known as a cervical suture or cervical cerclage.

It involves ‘stitching’ a tape around the cervix to support it.

The aim is to keep the cervix closed and therefore help prevent a baby being born too early.

Doctors might advise a cervical stitch because they believe the woman has a weakness in the cervix – they call this ‘cervical incompetence’.

This means the cervix runs the risk of opening before the end of a 40-week pregnancy, and maybe even very early on in pregnancy.

If the cervix opens, there is an increased risk of the baby being born early and not surviving, or surviving with a serious risk of long-term problems.

‘It was so exciting because our best friends had had twin girls the year before – we were going to be twin parents together!’

The babies shared a placenta which meant Chloe had additional monitoring as they were at risk of Twin-to-Twin Transfusion Syndrome (TTTS), which prevents blood from flowing evenly between the two infants.

‘I had a scan every week at first,’ Chloe remembers. ‘It was a nerve-racking and scary time, but the twins were developing well and showing no signs of TTTS.

‘We knew there’s always a chance with twins that they might arrive a little early so in May last year we went to a baby fair and bought the lot – prams, cots, clothes. We decorated the nursery and had everything ready for their arrival.’

Chloe was given the all-clear for TTTS at 23 weeks, but days later she suffered bleeding and was rushed to Kettering General Hospital, where doctors discovered she was in labour and already three centimetres dilated.

‘Things went from calm and collected to panic stations in a second,’ Chloe remembered. ‘Chris and I were sobbing, terrified for the future of our girls. 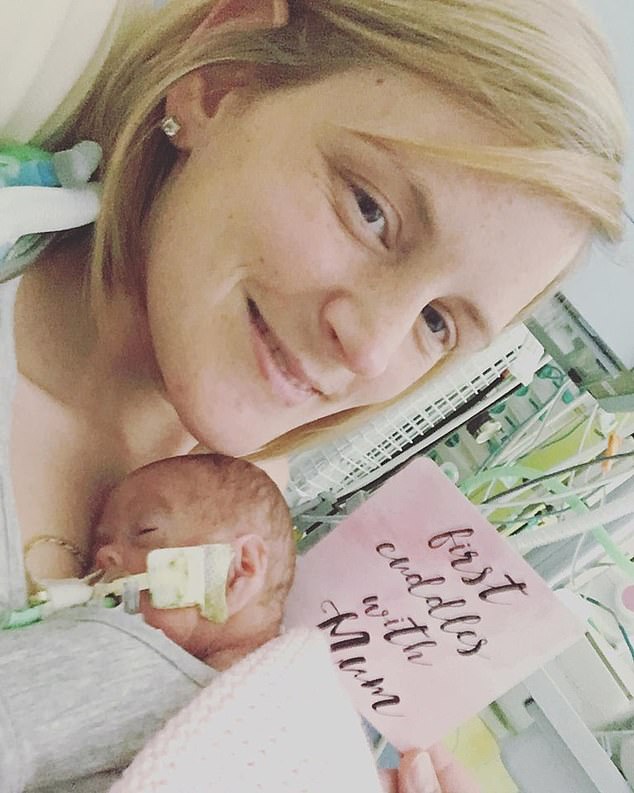 After marrying warehouse worker Chris, 32, in 2017, and honeymooning in Bali, the pair decided to start their family. Chloe pictured with Alice

‘Alice had already pushed her foot past my cervix, so it was a race against time to delay the labour and keep the girls inside me as long as possible.’

Chloe was treated with drugs to try to slow her contractions, and underwent surgery to put a stitch in her cervix, which was sadly unsuccessful.

She said: ‘I was told I had “an incompetent cervix”, possibly as a result of the LLETZ treatment years before. I discovered that if my midwife had known I’d had cell treatment, I could have a stitch put in at around 12-14 weeks.’

At 23 weeks and six days, tests revealed Chloe was developing an infection and had to give birth if the twins were to stand a chance of survival. 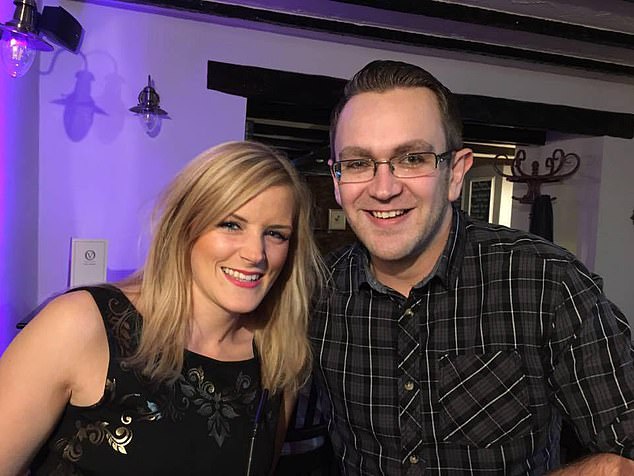 ‘Chris and I were absolutely distraught,’ says Chloe. ‘I’d already convinced myself that there was no hope and that the girls were going to be born dead.

‘When they arrived, we couldn’t even look at them at first. The staff got them in their incubators and wheeled them round. To our huge relief, both the babies were responding well.

‘You can’t imagine how it feels. We still had a very long way to go, but we’d overcome a huge hurdle.’

The twins were transferred to the Neonatal Intensive Care Unit at Birmingham Hospital, where Chloe remembers each day as a ‘rollercoaster’ of emotions.

‘No day or hour was the same,’ she says. ‘We were told to take each day as it came. One day it would be good news, the next a setback would leave us broken-hearted and sobbing.’ 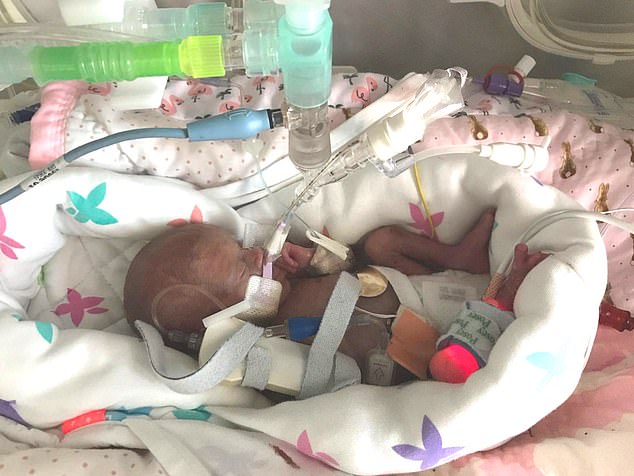 The twins made good progress at first, before Amelia (pictured) was diagnosed with Necrotizing Enterocolitis (NEC), a common complication in premature babies which causes the bowel to deteriorate 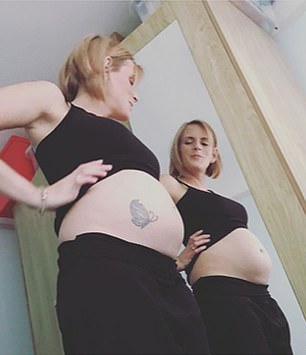 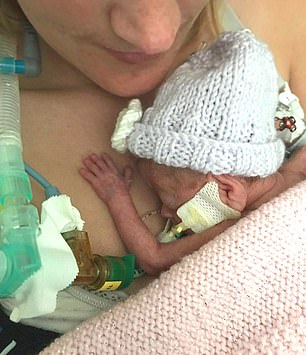 Shortly after, Amelia died and Alice (pictured right) then developed NEC before passing away. Pictured left: Chloe during her pregnancy

The twins made good progress at first, before Amelia was diagnosed with Necrotizing Enterocolitis (NEC), a common complication in premature babies which causes the bowel to deteriorate.

She was transferred to Leicester for specialist treatment but went downhill fast, and doctors gave Chris and Chloe the devastating news four weeks later that there was nothing more they could do.

‘The consultant was amazing,’ says Chloe. ‘He was so compassionate. But I couldn’t look at him as he told us. I just buried my head in Chris’s arm and cried.

‘We were told we could have as many cuddles with Amelia as we wanted, before her life support was switched off. She felt so tiny, she weighed hardly anything. She passed away right there in Chris’s arms.’

Numb with sadness, the couple had to swallow their grief as Alice was facing her own fight for survival back in Birmingham, as she had also developed NEC. 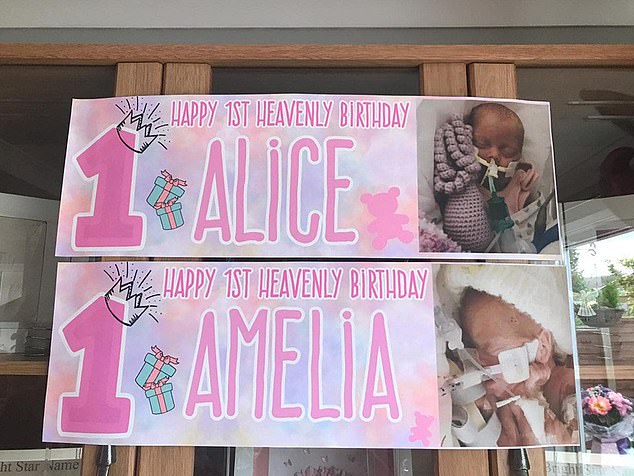 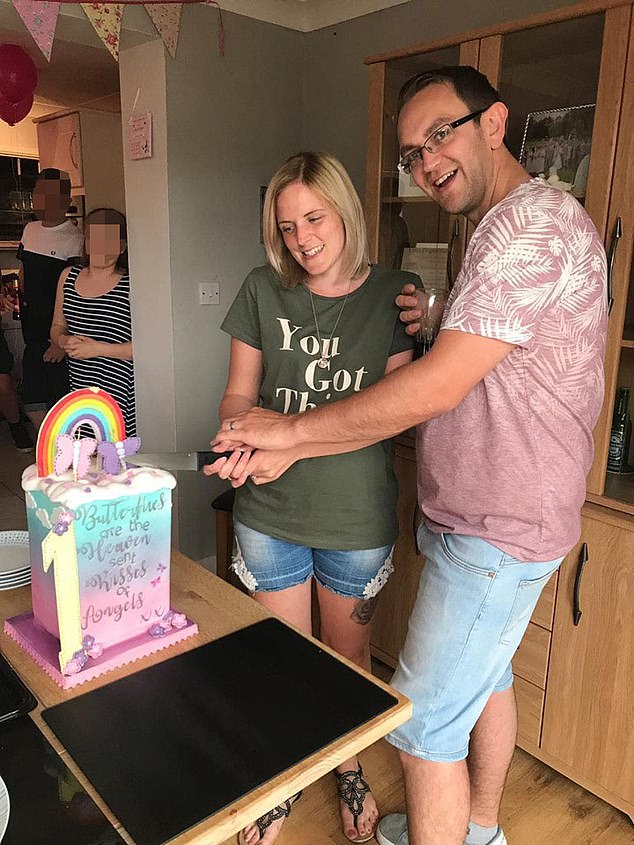 ‘We were told so many times how well she was doing, that she’d soon be coming off the ventilator. Her eyes were wide open, and she looked amazing,’ Chloe said.

‘Then all of a sudden her stats just fell through the floor. We had a call to get to the ward quickly – but by the time we arrived she’d already died and been resuscitated twice.

‘We were told that in the unlikely event that Alice survived, she’d be severely brain damaged. We made the heartbreaking decision to let her go at seven weeks old.’

Following the death of her girls, Chloe threw herself into raising awareness about the possibility of premature births following common cervical treatment, and has worked with Kettering General Hospital in a bid to improve antenatal care.

‘I didn’t know the risks and fell through the gaps. No one’s to blame, but I don’t want it to happen to anyone else. The policy should be rolled out nationally.’

Chloe is raising money to help fund a new £900,000 Maternity Bereavement Suite at Kettering General. Bereavement midwife Stephanie Fretter said: ‘We are enormously grateful to Chloe and Chris for supporting us in our plans to develop improved bereavement facilities for parents who go through the trauma of losing a child.

‘We wish them lots of success at their event and very much appreciate their kind efforts to support us.’