Mother who had an affair during lockdown while her husband cared for their daughter, 3, reveals she confessed in a bid to save her marriage – but is branded ‘selfish’ for wanting to ‘clear her conscience’

A woman who cheated on her husband during lockdown has sparked an online debate over whether you can ever trust again after infidelity.

Taking to Mumsnet, the anonymous woman, believed to be from the UK, told how she had always been an ‘exemplary wife’ and mother and that others saw her and her husband of four years as the ‘ideal couple.’

However, she says that she started feeling ‘extremely lonely’ during lockdown and ‘got caught up in the whole “new man giving attention to me” situation’ – and so started a four-month affair.

But when the woman, who now wants to salvage her marriage, questioned forum users on whether they could ever love again after infidelity, many agreed her actions were ‘unforgivable.’ 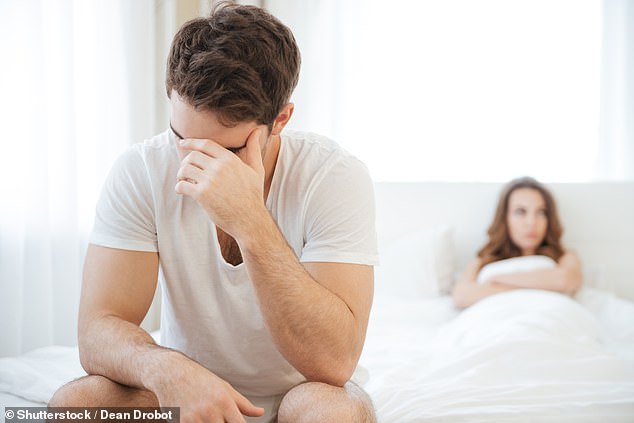 An anonymous woman, believed to be from the UK, who cheated on her husband during lockdown has sparked an online debate over whether you can ever trust again after infidelity. Pictured, stock image 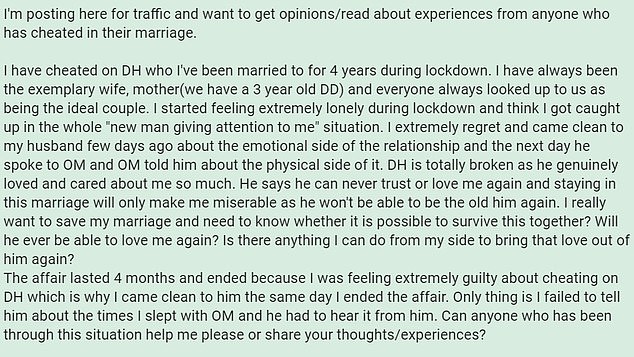 Taking to Mumsnet, the woman in question told how she wants to save her marriage following her four-month affair

In the initial post, the wife penned: ‘I extremely regret and came clean to my husband a few days ago about the emotional side of the relationship and the next day he spoke to OM and OM told him about the physical side of it.

‘DH is totally broken as he genuinely loved and cared about me so much. He says he can never trust or love me again and staying in this marriage will only make me miserable as he won’t be able to be the old him again.’

She continued: ‘I really want to save my marriage and need to know whether it is possible to survive this together?

‘Will he ever be able to love me again? Is there anything I can do from my side to bring that love out of him again?’

Many were outraged by the woman’s actions, and told her that acts of infidelity were ‘unforgivable’ (pictured)

However, many were adamant that the damage was already done and that if they were in the husband’s position, they wouldn’t be able to forgive and forget.

‘I’d never trust you again and wouldn’t stay with you,’ wrote one, while a second commented: ‘This is the end of the marriage. He can never trust you again, he can’t respect you anymore, and he will resent you forever. You’ve taken away so much that can be earnt back no matter how much you want it.’

The woman went on to explain that the affair lasted four months and ended because she was feeling ‘extremely guilty’ about cheating.

She penned: ‘I came clean to him the same day I ended the affair. Only thing is I failed to tell him about the times I slept with OM and he had to hear it from him. Can anyone who has been through this situation help me please or share your thoughts/experiences?’

However, many were left outraged that despite saying she ‘came clean,’ she still failed to tell her other half the whole truth.

‘So even when you “came clean” to your poor Dh, you still lied and told him it was an emotional affair when in reality it was a full blown sexual affair? It’s like a double blow, why would he ever trust you again?’ wrote one.

Another questioned: ‘Why did you tell him half of the truth? What was the logic behind that?

‘Whether or not the marriage is salvageable is entirely up to your DH. I would suggest that until you have enough respect for him to not minimise and lie about what you’ve done, there is no chance.

‘In his shoes, I’d end things. You’ve betrayed him by being unfaithful and then to add insult to injury you’ve lied about the nature of that infidelity, and forced him to find out the truth from your bit on the side. That’s so cruel.’

Meanwhile, others suggested it doesn’t matter what anyone else thinks – apart from her husband.

‘It’s up to your husband surely? No one here can tell you what he will do,’ penned one, while a second wrote: ‘Whether you have a marriage now depends on your DH.

‘If you still love him then you need to give him the time and space to work through it and make his own decision.

Beyond that, there is nothing else you can or should do.’

Tags: affai, an, Had, reveals, she, Woman
Recent Posts
We and our partners use cookies on this site to improve our service, perform analytics, personalize advertising, measure advertising performance, and remember website preferences.Ok