A woman has died after being shot inside a wild party thrown by an American NFL team at the multimillion-dollar Hollywood Hills home of former Australian television soap star Susan Hannaford. 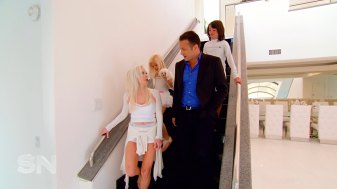 Australian actress Susan Hannaford with Sunday Night reporter Matt Doran in 2018 during a tour of her multimillion-dollar LA mansion.Credit:Seven

It is unclear if Hannaford, who played Kitty in the long-running Australian soap opera The Sullivans, or her two grandchildren, were at the property. Comment is being sought from Hannaford.

It is understood the home, which featured prominently in the media in 2018 when Hannaford invited various television crews into the home, had been hired by members of an NFL American football team to host the large party, which resulted in several neighbours calling police to complain about the noise.

"At approximately 7pm officers responded to a radio call of a disturbance at the scene of a party," however, while the large crowd and number of cars blocking the roadway in front of the property was a concern, the street was cleared and officers determined the music was not loud enough to warrant further action, an LAPD spokesman said. 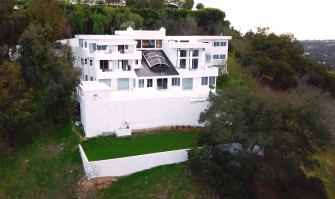 However, later that night at 1.15am police received a call of a shooting at the property, with five people injured.

"The five victims were comprised of three women and two men. Of those three women one was pronounced deceased at the hospital and she is described as a female, black 35 years old," the LAPD spokesman said.

There is an ongoing investigation with a large crime scene established at the property, with Mulholland Boulevard expected to be closed for several hours.

In 2018, Hannaford, 66, became something of a tabloid magazine's dream, rediscovered by both Woman's Day and New Idea after spending years lost in the celebrity wilderness. 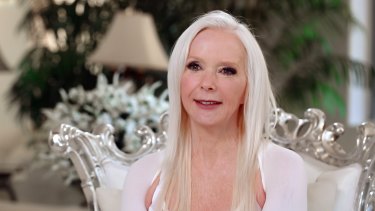 However, Hannaford sued in 2019 after Channel Seven's Sunday Night tracked her down in Los Angeles, where she was living in the vast mansion with her two grandchildren, Bella and Dante, whom the former actor says she had adopted from her daughter, Marquessa.

Sunday Night reporter Matt Doran managed to get inside the house, named Palazzo Beverly Hills, for a rare interview, though the bleached blonde in micro shorts, stripper heels and Lady Gaga shredded top matching her granddaughter's outfit bore little resemblance to the girl-next-door that Australians remembered as Kitty Sullivan.

Hannaford ended up storming out of their interview when she took a dim view of Doran's line of questioning.

Hannaford once owned a frock shop in Double Bay in the 1980s, claiming at one point her dresses were being worn by Farrah Fawcett, Cher, Zsa Zsa Gabor and Monaco's princesses Stephanie and Caroline.

But things did not end well for her financially in Australia, with her luxury home being sold mortgagee in possession long after she left these shores for life in LA.

In the early 1990s she offered to design costumes for American soapie The Bold and the Beautiful, but as for her much-reported recurring role, any trace of it appears to have been lost, like sands through the hourglass.

Get our Morning & Evening Edition newsletters

The most important news, analysis and insights delivered to your inbox at the start and end of each day. Sign up to The Sydney Morning Herald’s newsletter here, to The Age’s newsletter here and Brisbane Times‘ here.