A woman has been left toothless and unable to open her mouth more than a centimeter, after the toothache dentists dismissed turned out to be cancer.

Student Nicole Kowalski, 28, from Los Angeles, was left with life-changing alterations to her face after she was diagnosed with salivary gland cancer in 2018.

She had been complaining of a pain in her jaw for months, which her dentist had dismissed as nothing to worry about.

An  X-ray concluded a benign tumor was lodged on the student’s upper jaw. However, after initial treatment, it was revealed the tumor was cancerous and needed to be treated immediately.

Nicole was left with trismus – more commonly known as lockjaw – after her treatment, and can now only open her mouth a few millimeters.

After years of distress, she was finally given the all clear to receive a new obtruator –  a type of prosthetic retainer – to replace the teeth she’s missed. 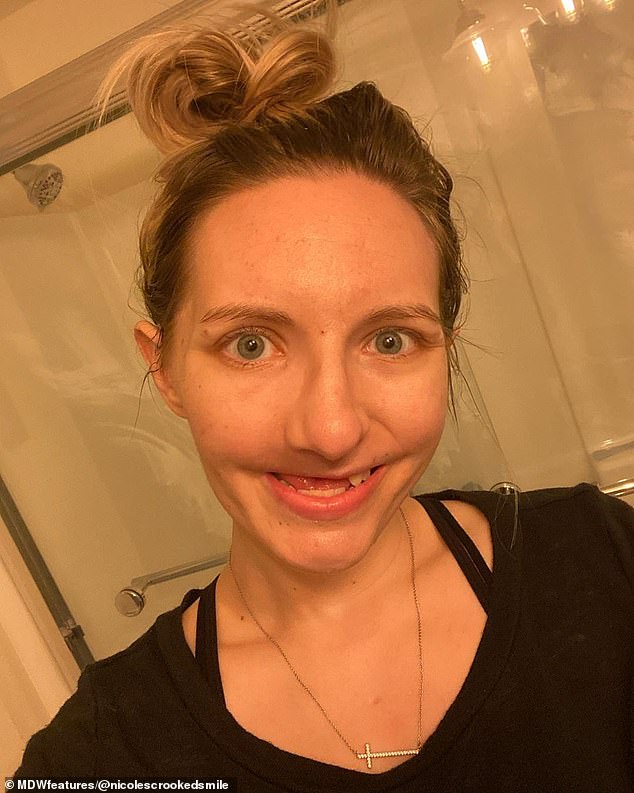 Student Nicole Kowalski, 28, from Los Angeles, was left with life-changing alterations to her face after she was diagnosed with salivary gland cancer in 2018 (pictured now) 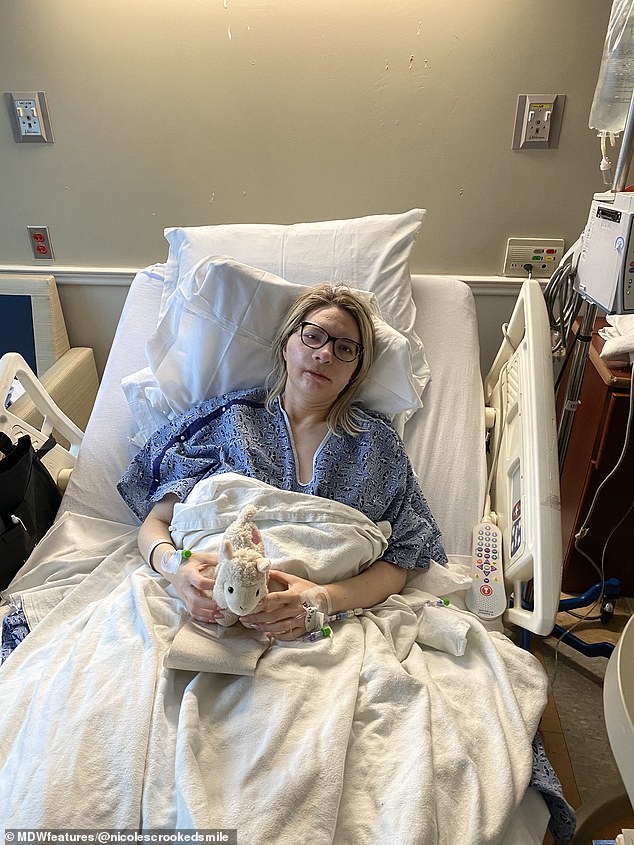 Many of Nicole’s teeth, including her front teeth, had to be removed after she was diagnosed with salivary gland cancer (pictured in hospital after her surgery)

The Californian student developed toothache in June of 2017 but after being told by her dentist that it was nothing to worry about, she soon dismissed her concern. However, the pain persisted for a further six months.

‘It started with a toothache. The dentist told me it was nothing to worry about but over the next six months, the pain increased and spread to my jaw and face.

‘It was so intense that I couldn’t sleep. Eventually after a few trips to the doctors, an x-ray at the dentists revealed some bone loss.’

Fed up of being unable to sleep, Nicole sought medical advice and was treated for a sinus infection, yet the pain still remained. During her next appointment with the dentist in January of 2018, an x-ray revealed that Nicole’s upper jaw was missing some bone. 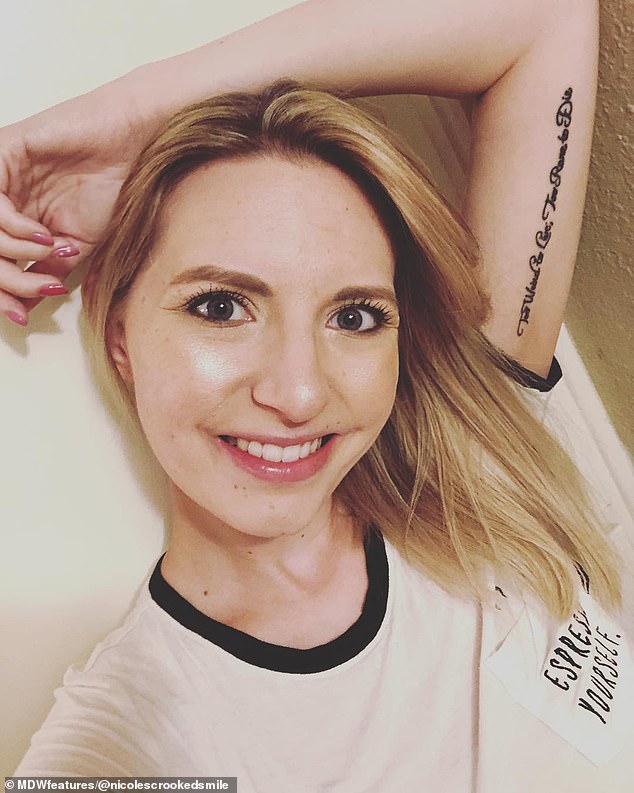 Nicole explained her toothache was so painful, it left her unable to sleep. Yet,  her dentest dismissed the pain as nothing to worry about 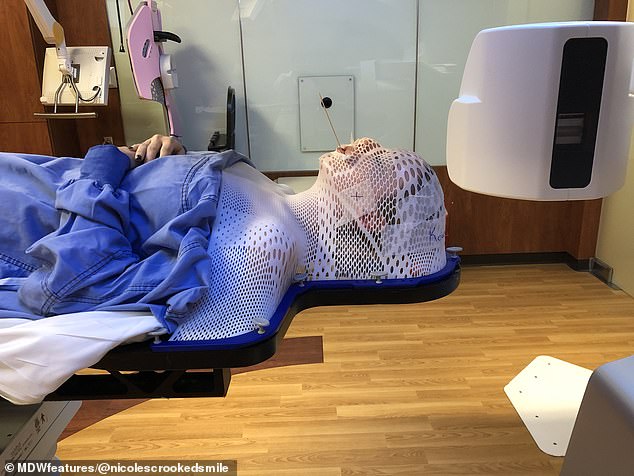 After undergoing a biopsy in 2018, Nicole heard she was suffering from salivary gland cancer and needed to be treated

The dentist transferred Nicole to an oral surgeon who removed a molar to perform a biopsy.

‘A biopsy revealed that I had a benign tumour. This was in my upper right jaw and I underwent surgery to remove it.

A two-hour partial maxillectomy was performed to remove the harmless tumor and the six-months of pain appeared to be over. 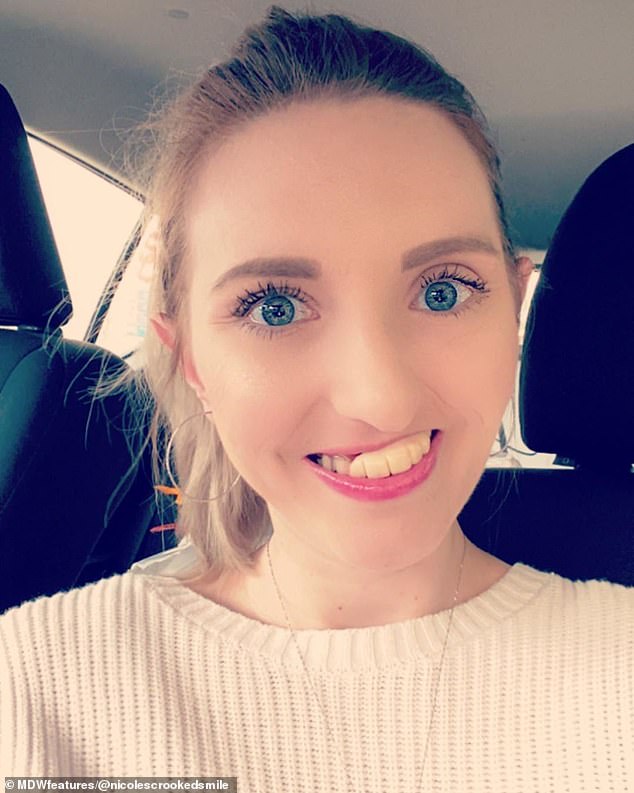 11 of Nicole’s teeth were taken away. She now is waiting to be fitting with an updated obtruator, a type of prosthetic retainer (pictured with an older prosthetic)

Four of Nicole’s teeth were removed during the surgery and she was given an obturator to seal the hole in her palate and replace the teeth allowing Nicole to eat, drink, and speak.

‘It wasn’t until I went back for my follow up appointment that I found out I was misdiagnosed and had salivary gland cancer.

‘Cancer runs in my family so you kind of realize that the chance you might get it is always there but I wasn’t prepared to hear those words,” Nicole said.

‘I thought about my age and all the things I wanted to do. I felt an immense sense of loneliness. 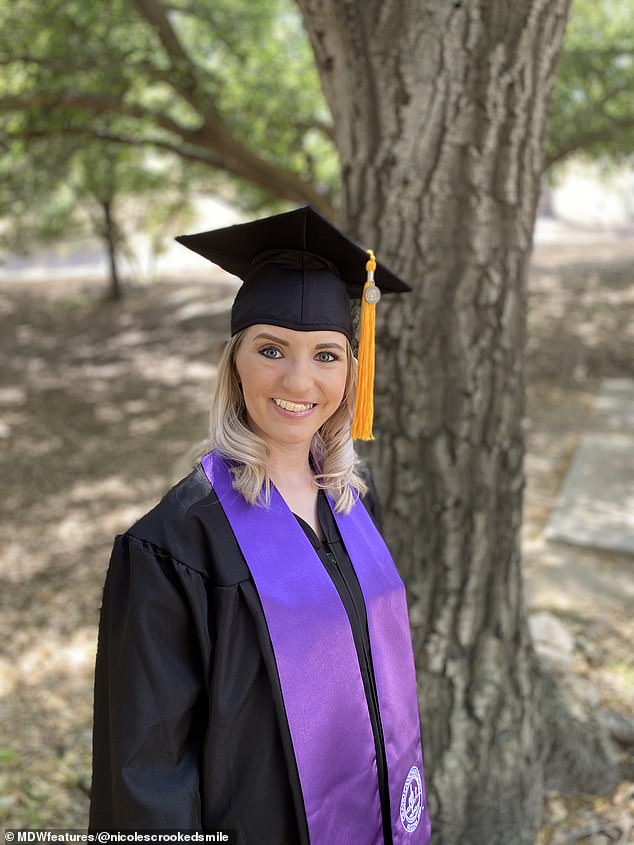 After months spent in hospital undergoing treatment, followed by re-education, Nicole was able to resume her studies 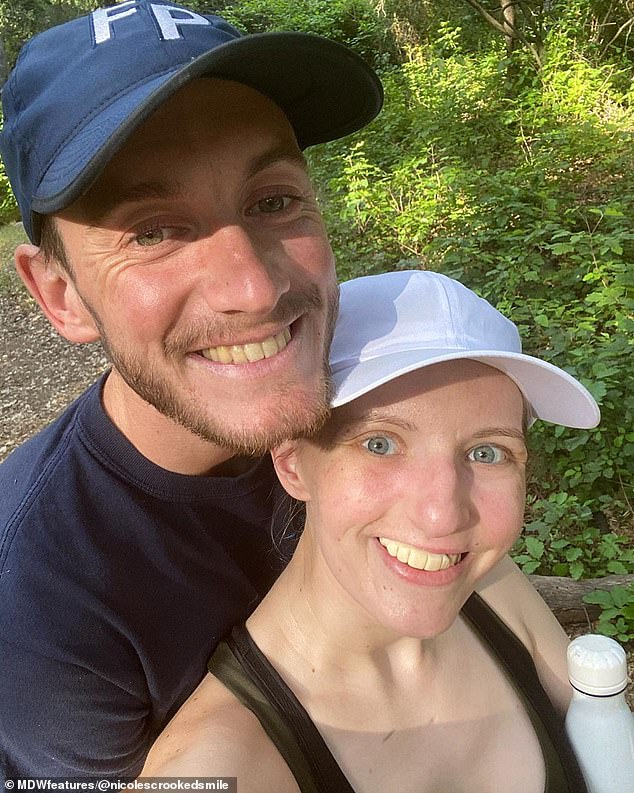 Nicole went through a divorce from her first husband during her ordeal, but she has now found love again with her boyfriend Eric (pictured) 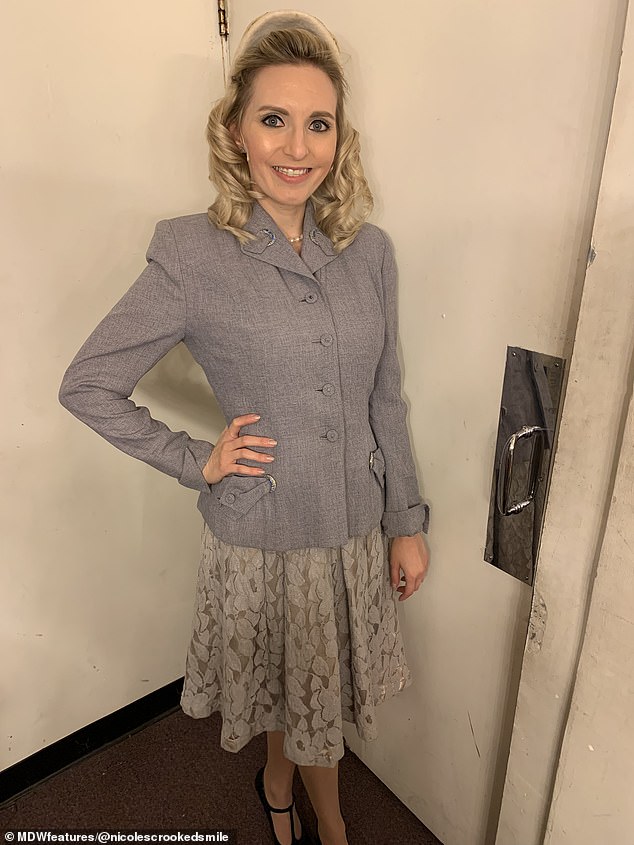 Nicole pictured now, habing recovered from her surgeries. She was left with trismus, – also known as lockjaw – and can only open her mouth a minimum

Cancer wasn’t new to Nicole’s family. Unfortunately, three of Nicole’s grandparents and two aunts had been diagnosed yet Nicole was still shocked and devastated to hear her diagnosis – particularly given her age. She spent the next 30 days undergoing radiation treatment.

Such treatments have a range of side effects and Nicole developed trismus which limits her ability to open her mouth. Nicole can only open her mouth to nine-millimeters and must exercise her jaw daily and attend speech therapy.

Despite the intensity of the treatment, Nicole’s pain persisted and doctors noticed a shift in the positioning of her teeth. In December 2019, a PET/CT scan revealed that the cancer had returned and Nicole’s jaw-bone was dying. 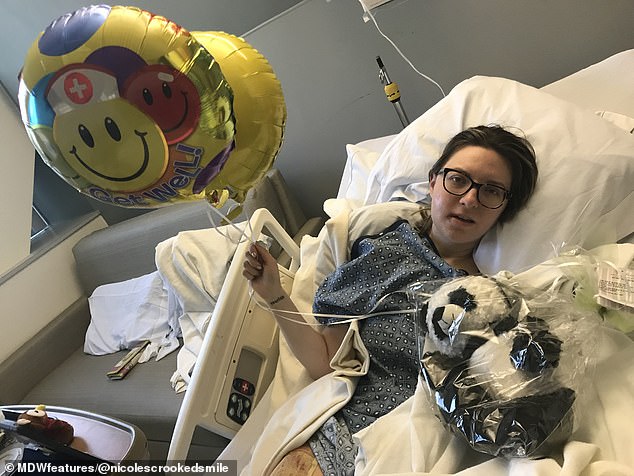 Nicole in hospital after her last operation, where seven extra teeth were removed, bringing the total up to 11 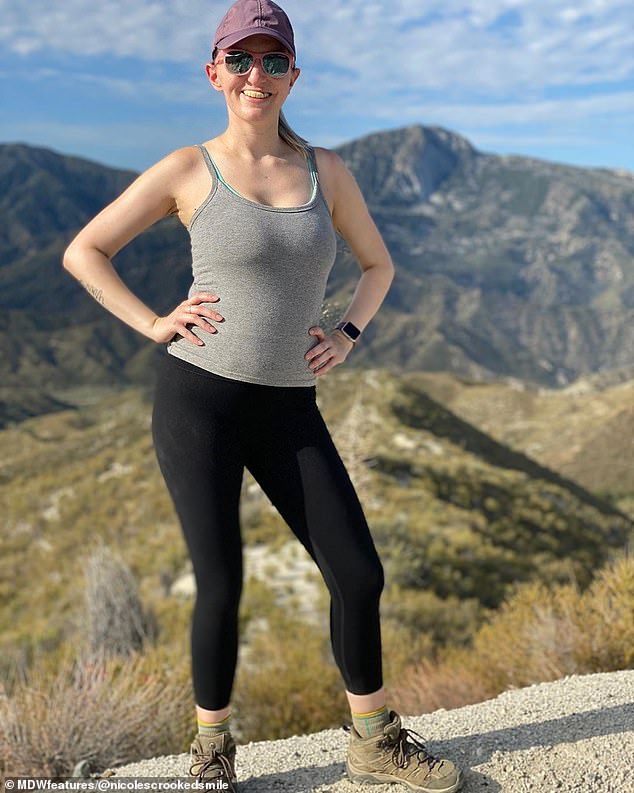 After the ordeal, Nicole now feels more confident to resume social activities. Pictured on a hike with Eric 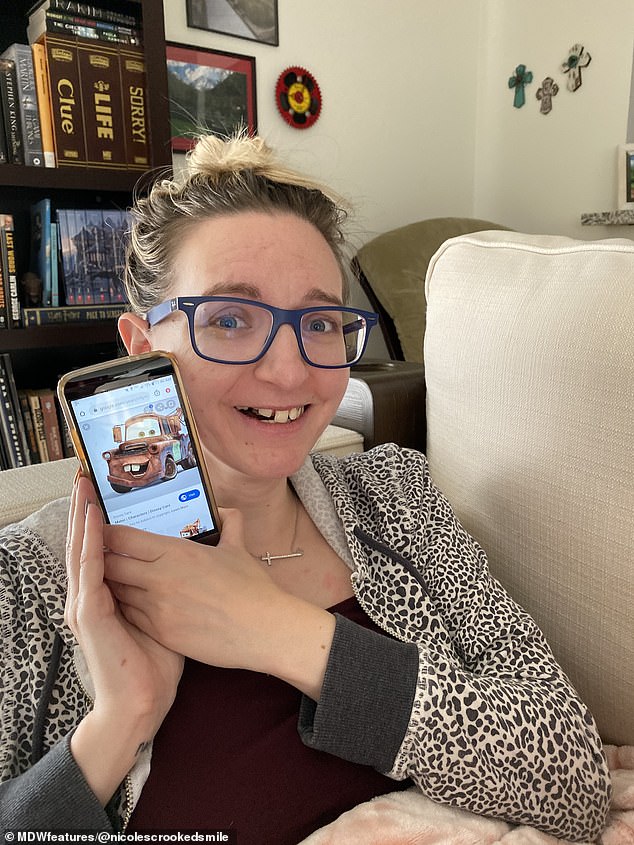 Nicole posing with a picture of Towmater from the Pixar film ‘Cars’. Lockjaw makes it hard for Nicole to speak and eat, and she has to stretch her jaw everyday

‘I spent a month attending radiation treatment yet I still experienced intense pain. A year after my first round, my teeth started to shift which wasn’t normal and doctors thought my bone might be dying – a possible side effect of the treatment.

Surgery was required to remove her hard and soft palates as well as another seven teeth including Nicole’s front teeth. Additionally, Nicole underwent a further 30 days of radiation treatment to treat the cancer recurrence.

At the same time, Nicole’s personal life was in upheaval as her relationship of ten-years abruptly ended after her partner announced one day that he believed they’d grown apart.

‘It was hard to think of being an independent person without that relationship but we divorced amicably and I’m very lucky to have had him as a friend.

Thankfully good news followed soon after. In August of 2020, Nicole was finally given the all clear and is now awaiting her new updated obturator. 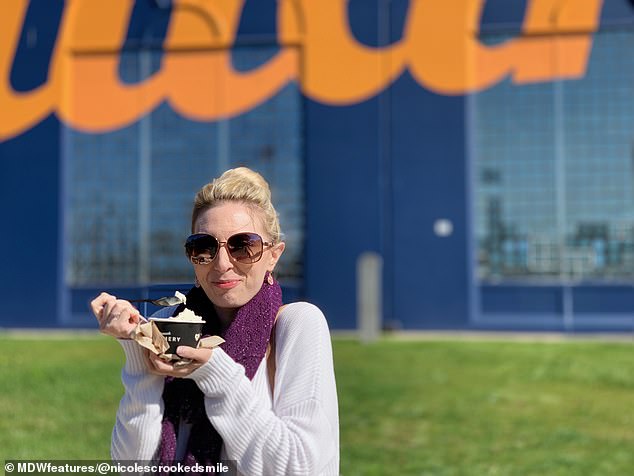 Nicole enjoying some ice-cream on a day out after her ordeal. She received the all clear in August 2020 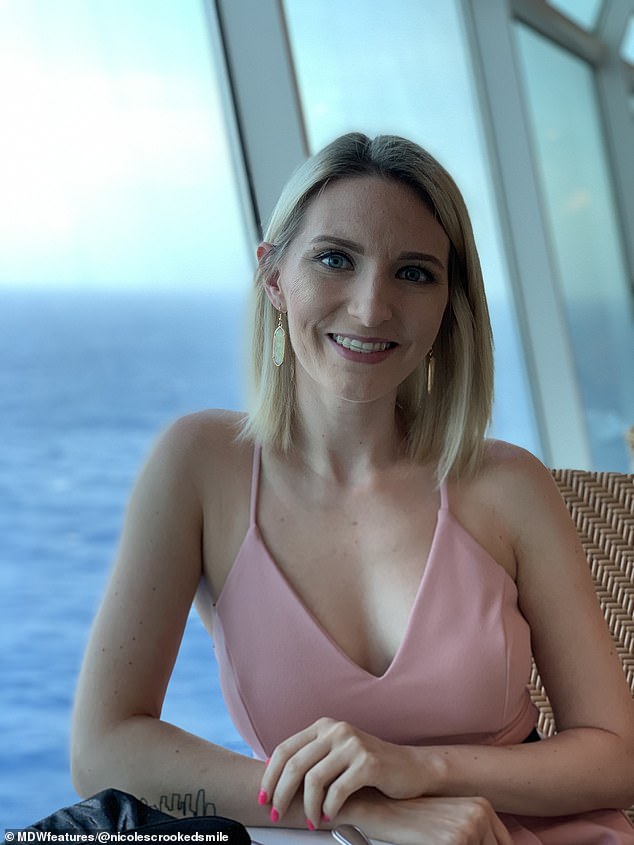 Nicole before her diagnosis. The student said the disease changed everything about her life. She said she had never heard of her type of cancer before and wants to raise awareness 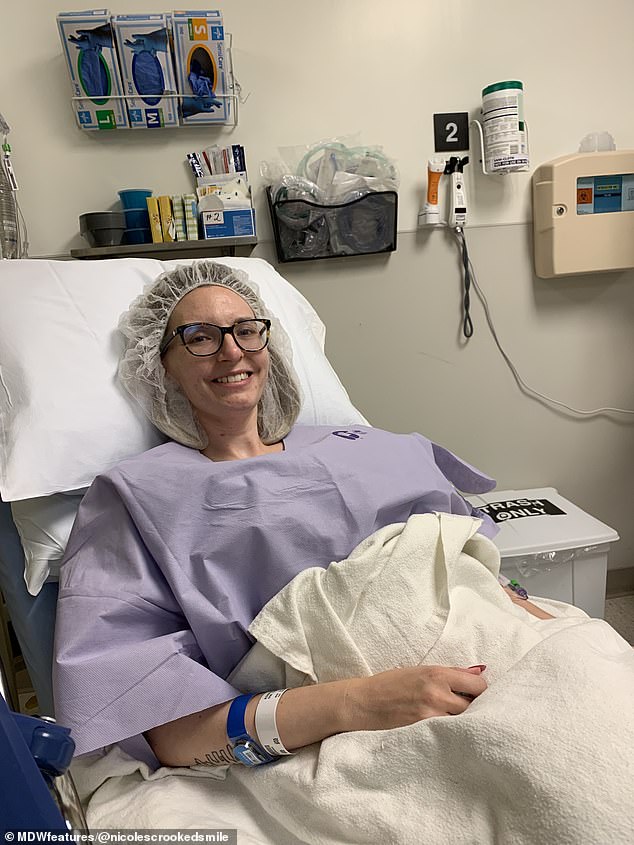 The student in hospital for her tooth ache, before she was told it was cancerous. Nicole explained neck and head cancers are often called ‘lonely cancers’ because there is very little awareness on them

‘As of right now, my scans are clear and the pain is much duller and no longer so intense. I should get my new obturator this month.’

The radiation treatment caused Nicole to develop trismus, and she still experiences some pain in her jaw due to the limitations in movement.

‘Trismus is a condition that affects someone’s ability to open their mouth,” Nicole said.

‘I can only open my mouth nine-millimeters wide. It makes eating and speaking difficult and I have to stretch my jaw every day. 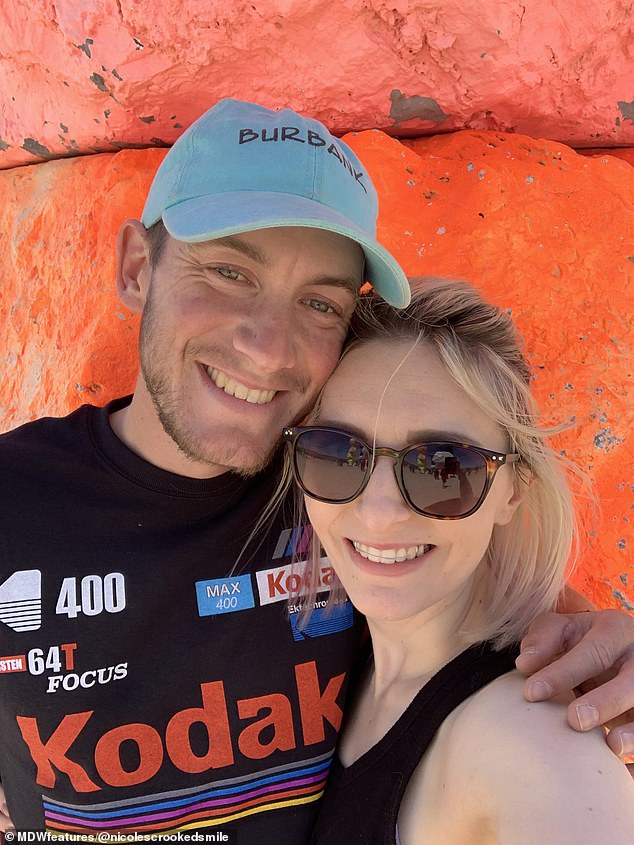 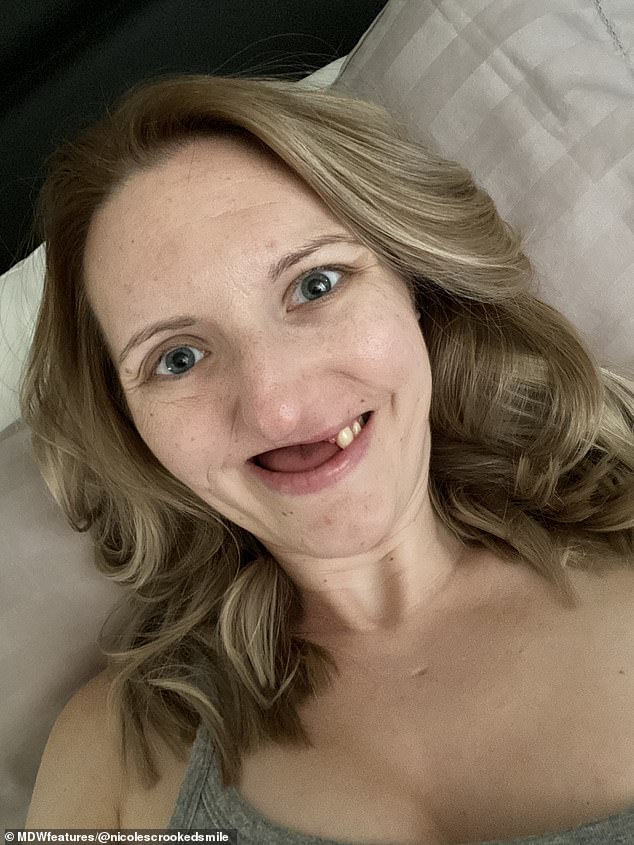 Nicole showing off her missing front teeth in a selfie. People have to pay for prosthetics out of their own pockets in America

‘I use tongue depressors to leverage my jaw open four or five times a day. I attend speech therapy twice a week too and have an entire kit to keep my mouth clean and tidy.

Dubbed ‘the lonely cancer,’ prosthetics like obturators for patients like Nicole are considered ‘unnecessary’ in the US healthcare system so people must pay out of their own pockets.

However without this, Nicole wouldn’t be able to perform basic human functions like eating and talking.

Nicole is happy to have found love in her new partner, Eric, and has completed her bachelor’s degree and can now commit to studying for her masters.

Nicole’s social life is back on track too and she’s recently taken up hiking in the Los Angeles area.

‘I met Eric last year and falling in love with him has been magical. I feel like the luckiest person in the world to have him as my partner,’ she said.

‘We hadn’t even known each other a year but during my second surgery, Eric spent every single day with me at the hospital making sure I was getting everything I needed.

WHAT ARE SALIVARY GLAND TUMOURS?

There are several types of salivary glands in and around the human mouth, and all can fall victim to benign or cancerous tumours.

The glands are where saliva is produced to lubricate the mouth and throat and to digest food.

The three types of salivary gland are the parotid glands, the submandibular glands, and the sublingual glands.

Tumours in the parotid glands – which are just in front of the ears – are the most common, making up about 70 per cent of salivary gland tumours.

Submandibular tumours are the second most common, accounting for 10 to 20 per cent of tumours – the glands are just below the jaw.

The sublingual glands are the smallest and are in the bottom of the mouth under the tongue – tumours starting in these are rare.

‘It was and is still so clear how much he loves and supports me.’

Having had her life been so wholeheartedly affected by cancer, Nicole is determined to help others who feel alone and ignored showing them that they too deserve to be loved and supported – and that support is out there.

‘It’s okay to feel what you’re feeling. If you need to grieve or cry or scream, do it,’ Nicole said.

‘People will try to tell you what to do, how to fix things, how to feel, and when to go back to work but listen to you and stay positive.

‘The disease changed everything about my life and the way I look at the world. I had no idea this cancer existed.

‘Head and neck cancer is often dubbed “the lonely cancer” as cancer awareness stops at a certain point. We do not often receive the support or understanding we need to navigate our illness.

‘It is common in the United States for us to pay out of pocket for our prosthetics as insurance companies view them as unnecessary even though this kind of cancer affects the way we do everything – including talk, breathe, drink, and eat.

‘This disease may have taken away chunks of my mouth and plenty of teeth, but it didn’t take away my voice.’

Tags: after, left, Toothless:, Was, Woman
Recent Posts
We and our partners use cookies on this site to improve our service, perform analytics, personalize advertising, measure advertising performance, and remember website preferences.Ok