The King of Rock and Roll may have left us over 42 years ago, but how would he react to the coronavirus pandemic today? Well Elvis Presley cousin Danny Smith, who was part of The King’s inner circle at Graceland with parents Billy and Joe, has shared a new video claiming how the singer would react. And he reckons The King would be contacting The President.

Speaking on his Memphis Mafia Kid YouTube channel, Danny said he had been talking with his parents Billy and Jo Smith about how Elvis would react to the lockdown.

Danny said: “Definitely he would be quarantined [with] his family and his group.

“He loved being around his family and it’s what he would have wanted.

“Of course, there would have been the precautions [like keeping a distance from each other].” 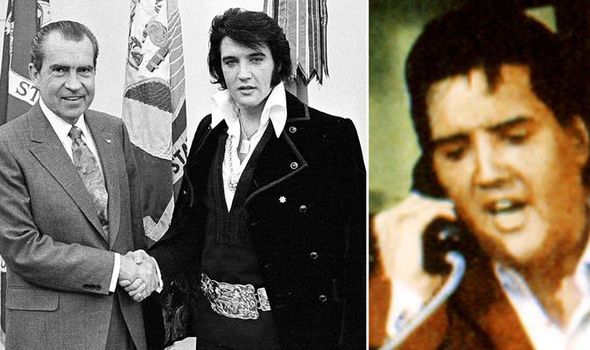 Danny continued: “He’d probably have been trying to get in contact with the President and be backing the President.

“Definitely wanting to know what he could do and what kind of assistance could he be.

“He’d wanted to get involved and would have taken it very seriously.”

No doubt, the Memphis Mafia Kid suggested this hypothetical scenario because Elvis famously reached out to President Richard Nixon and ended up meeting him in the White House’s Oval Office just before Christmas 1970.

The patriotic Elvis wanted to meet the Republican president as he felt he could reach out to hippies and help combat drug culture.

Nixon agreed to the meeting, believing The King would send a positive message to young people.

Whether or not Elvis would have quarantined at his Memphis home of Graceland or not is left up to speculation.

However, the mansion museum has been temporarily closed since late March due to the pandemic.

Nevertheless, Graceland is set to reopen on Thursday, May 21.

A statement read: “We are so excited to see you back at Elvis Presley’s Graceland!

“100+ acres dedicated to the King of Rock ‘n’ Roll will welcome back guests beginning Thursday, May 21.

“Graceland is committed to the health and safety of our guests and associates and has been working diligently to reconfigure all operations – including tours, retail and restaurants – to meet or exceed social distancing, capacity, and health and safety guidelines.”

They added: “With Mansion tours reduced to 25 per cent capacity, guests will have the unique opportunity to walk in Elvis’ footsteps like never before – in your own personal mansion tour space spread out from other guests.”

“Please protect yourself and wear your mask even gloves if you choose.”

During the closure, Graceland has been floodlit in the red, white and blue of the American flag as a sign of solidarity and to reflect Elvis’ patriotism.