“Happen to Me,” the first song on Benee’s debut album, Hey u x, kicks off with a line about her fear of dying in a freak accident. It’s a song about anxiety and dread, inspired by her reoccurring thoughts of airplanes crashing, raging fires, getting kidnapped, and just being alone. But the 21-year-old singer-songwriter — born Stella Rose Bennett — says it was a snap to write: “The sadder songs are normally a lot easier. They just have such intense emotions. It feels great venting it all out.”

That instinct hasn’t steered her wrong yet. Her hit single “Supalonely” has raked in more than 2.5 billion streams worldwide; Elton John declared it music’s “next global smash.” On the song, she paints a picture of herself as a fuck-up, a loser, a quitter, and a sad girl, but she does so in a way that isn’t at all self-indulgent, thanks to the upbeat music, the sarcasm between the lines, and the levity of her delivery. It’s the catchiest and most danceable track on Hey u x, which also has key features from Grimes, Lily Allen, and one of indie pop’s current darlings, Mallrat. There are songs about feeling tossed aside and songs about getting used to being used — but there’s also a song inspired by snail-watching, so don’t think she takes herself too seriously.

Benee was just 19 years old when “Supalonely” began taking off on TikTok. “I was really happy with how it was sitting,” she recalls, describing the final steps of her breakthrough song’s creation. “It sounded like the music I had really been wanting to be make, but I didn’t know I had a hit… I was nervous, because a lot of my music is indie pop — it’s either pretty chill or funky — but, in this one, I’m swearing and I’m screaming that I’m a lonely bitch. And I have Auto-Tune in the verses. I was like, ‘People are going to hate this.’” They didn’t.

In a time marked by a global pandemic, the promotion of new artists’ music has often taken a backseat to bigger headlines. Benee’s rise, however, seems unstoppable. She recently made her U.S. television debuts performing on talk shows hosted by Jimmy Fallon, Ellen DeGeneres, and Seth Meyers. She was deemed an Apple Music “Up Next” artist and a MTV “Push” artist, and was nominated as a Best New Artist by MTV’s VMAs and EMAs as well as E!’s People’s Choice Awards.

When New Zealand came out of lockdown in the fall, reporting no new cases of Covid-19, Benee embarked on a sold-out headlining tour across the country. That concluded with two shows at Auckland’s 12,000-capacity Spark Arena, leaving her proud and very emotional. By this point, she’d gotten used to serving as an opener, warming up someone else’s audience. More than a few times, she’d witnessed a crowd grow from the viewpoint of a festival stage, watching hopefully as people left nearby sets and wandered in her direction. With this tour, though, she was pulling herself up to a new level. 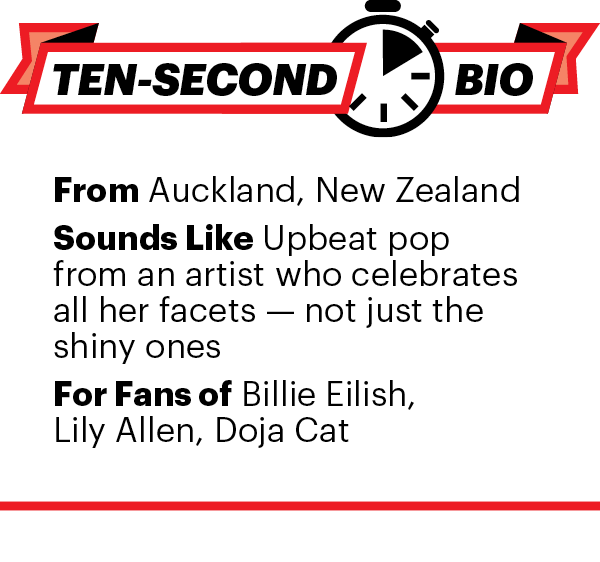 “When you’re playing a show in an arena and the people are there because they want to see you perform, it’s very strange,” she says. “I kind of had to think about it for a bit… It gives you a new kind of confidence. It’s pretty special. It was a big tour for me in all kinds of ways.”

The nerves creep up on her before she plays a show. Often, she won’t be able to eat and won’t realize it at the time. “That’s when I know something’s weird, and that’s when I know I’m actually grossly nervous — only it’s not connecting to my brain. I hate it, because I am hungry but I’m just so sick and nervous. Right before I go on, it really hits me. I ‘nervous wee,’ like, 10 times. But when I get on stage, I feel like I just get to the point where I’m so, so scared that I just don’t feel anything.”

No matter how nervous she gets prior to the big moment, Benee insists that she adores performing on stage. “I can’t speak in front of a room of 10 people, because I will literally faint, but I can perform a gig,” she says. “I love it.” Being Benee, instead of Stella, empowers her as if the persona is a superhero costume.

While it isn’t uncommon for buzzing new musicians to say they’ve been waiting their whole lives to kickstart their careers, that isn’t the case here. Benee says she only started to look at performing in a professional capacity when she was 17. At the time, she was on track to get a communications degree from the Auckland University of Technology. “I knew I wanted to do something in the creative industry, but I wasn’t 100-percent on anything,” she says. “I came home on the Friday of my second week and had a meltdown. I just cried to my parents, and they basically told me to focus on the music and give it a solid shot. That’s when it clicked.”

This year, she’d like to focus on growing a female-run record label called Olive. She launched the company with the signing of fellow Kiwi artist Muroki, who’s also featured on her album (“All the Time”). Benee says she’s thrilled by the idea of doing A&R work, discovering and promoting under-the-radar artists, and linking them with producers, managers, and others. She stresses how important connection-making is in the music industry, especially in New Zealand: “It’s really hard for someone at the bottom of the island to put their hand up here.” And she sees the importance of putting female executives in high-up roles — a too-foreign concept in this industry.

Benee, who exudes massive potential, has also already started creating another body of work. She generally looks at songwriting as a form of venting, constantly jotting notes down as emotions wash over her; she doesn’t need to be in any particular “writing mindset” to start putting pieces together. Pop music, for her, is all about connecting with listeners who need some solace. “I just want them to be able to relate to something,” she says through a half smile, “and feel some form of comfort.”