Late one weeknight in October, as the Long Island band Moon Tooth was setting up on the stage of Brooklyn metal haven Saint Vitus, the background music on the PA abruptly shifted from sludgy hardcore to the crisp, neo–James Brown funk of Mark Ronson and Mystikal’s “Feel Right.” A stocky, bearded figure made his way to the center of the crowd, dancing furiously. Getting down in the same area of the floor where showgoers typically mosh, he mouthed along to the song: “I feel right in this motherfucker! Feel good in this motherfucker! My whole hood in this motherfucker!”

A couple minutes later, the same man — Moon Tooth’s singer, John Carbone — made his way onto the venue’s stage, grabbed the mic and, as his bandmates kicked in behind him, began belting out the explosive post-hardcore anthem “Trust.”

Carbone’s switch from dancing machine to metal dynamo summed up the Moon Tooth experience as a whole: disparate musical impulses crammed together in breathlessly intense, often dizzyingly off-the-wall songs that somehow cohere and lodge in the brain like pop earworms. Eleven of those make up the quartet’s 2019 album Crux, simultaneously the year’s most exhilarating and heart-wrenching heavy-rock album. In a time when metal is hopelessly subdivided, Moon Tooth cherry-pick from the genre’s entire spectrum, variously evoking Van Halen flash, Converge catharsis, Deftones soul, Mastodon intricacy, and Meshuggah heft. There’s something in each track on the album to piss off every purist — or delight any headbanger who’s grown weary of picking sides.

At the center of it all is Carbone, who’s unlike any metal vocalist you’ve ever heard. He swoops and soars in a torrent of melody on tracks like anti-Trump rallying cry “Musketeers,” and on the album’s two exquisite breakup ballads, he emotes with a gritty pathos rarely heard outside R&B. His delivery assures that as hectic as the album gets, it’s always grounded in ironclad hooks and gut-level poignancy.

The artful equilibrium heard on Crux didn’t come about overnight. The evening before the Saint Vitus show, Carbone, guitarist Nick Lee, bassist Vincent Romanelli, and drummer Ray Marte — all in their late twenties or early thirties — sit in the lounge at Westfall Recording Company, the Long Island studio that Marte co-owns, digging into takeout pizza and tracing the evolution of Moon Tooth’s sound.

“If you listen to our record before this one, it sounds very ADHD almost,” says the wiry, long-haired Lee of the band’s 2016 debut, Chromaparagon. “We were really trying to make a statement that we can do all this psychotic stuff.”

In reality, Lee and Marte had already begun making that case with their prior band Exemption. The guitarist and drummer met on the first day of middle school — Marte was the first person Lee ran into who also had long hair and wore Metallica shirts. By ninth grade, they’d formed Exemption, and by the time they graduated, they’d put out their debut, which Lee calls “like 80 fuckin’ minutes of weird stoner metal.”

Lee met Carbone through a side project, where the latter was playing drums, and Carbone passed the guitarist a solo album he’d made that featured his singing. “I didn’t know he sang, so I was blown away by it,” Lee recalls. Then, in 2012, when Exemption split up and Lee and Marte decided to form a new band, Carbone wrote the guitarist, offering up his vocal services. “It was really polite,” says Lee of Carbone’s note, “but it was essentially like, ‘I’m the singer of the band. I know it in my heart.’”

Romanelli, a longtime friend who had worked with a string of Long Island metal bands, rounded out the lineup. “He was just such a warm, special, caring person,” Lee says. “I knew he could play bass like a motherfucker, but it was really more that, like, I want that guy in this tribe.”

The band christened themselves Moon Tooth — a name that, Lee says, stemmed from “just getting high in the van” — and began writing and gigging furiously, playing more than 75 shows in 2013. They put out an EP and gradually ramped up their national touring during the next several years, while opening local shows for everyone from Gwar to the Dillinger Escape Plan. Chromaparagon followed, featuring 12 proggy, labyrinthine songs, some built around riffs that Lee and Marte had stockpiled before Moon Tooth formed.

By the time they began writing Crux, they knew they were ready for a change.

“After playing those songs for many years, it just became apparent to me that I don’t necessarily want this to be the path,” Lee says of the Chromaparagon material.

“I want to write music that really appeals to everybody,” he continues. “Not in a way that I feel like is getting lazy or being like, ‘Oh, I’ll just write this whatever riff’; it’s more like, how can we take all of that aggression and technicality and really focus it and harness it to be powerful to anybody who heard it? You don’t have to be a musician to dig this.” 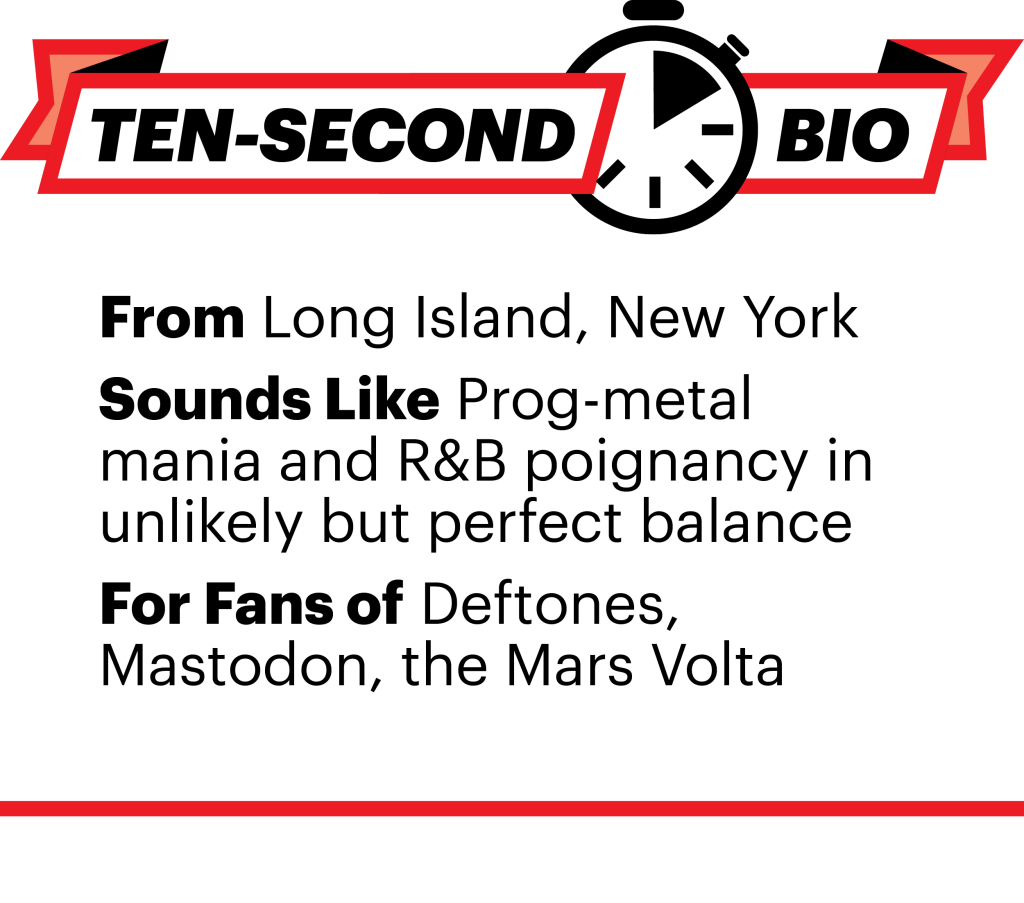 “You want that replay value,” adds Romanelli. “You want something that sticks to you in an emotional way.”

Carbone can surely relate. Lee and Marte share a strong foundation in metal staples like Metallica, Pantera, and Slayer, but the singer comes from a different background altogether. As he drove his guest from the Long Island Rail Road to the studio — describing the “love/hate thing” he feels for the suburban sprawl of Nassau County, where he and Moon Tooth’s other members grew up — he turned up the volume on an album of mid-2000s indie-pop by Grizzly Bear side project Department of Eagles.

“I dig metal, especially when I was younger, but probably not as much as these guys,” Carbone says at the studio. “Now, and the past 10 years or so, I’ve been mostly an indie-rock guy, [and] when I was younger, even to now, one of my favorite things is the blues and R&B. So those kind of vocalists — Otis Redding, Muddy Waters, Howlin’ Wolf, Aretha, Etta James — those are the ones that really hit me.”

A track like Crux’s “Omega Days” reflects the band’s unusual melange of influences. The song opens on a jagged riff, with Carbone weaving in and out of its contours. Midway through, the intensity lets up and the singer shifts into a robust croon. It’s a startling moment and one that — like the saxophone-abetted boogie-funk breakdown in “Trust” or the almost gospel-ish power-ballad climax of “Motionless in Sky” — demonstrates how, in nearly every song on Crux, Moon Tooth make much contemporary metal sound monochromatic.

From the start, Carbone’s bandmates had faith in his unconventional approach, even when some listeners were left puzzled.

“I always thought that John’s style was just really cool,” Marte says. “I think for some people, it was kind of polarizing, or the internet comments…”

“I got the most hate for sure,” Carbone interjects.

“‘Kick out that vocalist! But that riff’s cool,’” Marte continues. “Shit like that.”

The band got more-constructive feedback from seasoned hard-rock and metal producer Gene Freeman, better known as Machine, and Mark Morton, guitarist for beloved Virginia outfit Lamb of God, both of whom helped the band refine the songs that ended up on Crux. An employee at Machine’s Austin studio who had once shared a bill with Moon Tooth tipped him off to the band. The producer liked what he heard, came to see Moon Tooth in Brooklyn in 2017, and offered to work with them, eventually inviting his old friend and collaborator Morton to join in. In the end, the two were only able to assist with preproduction, but the time the band spent at Morton’s home studio in rural Virginia proved invaluable. 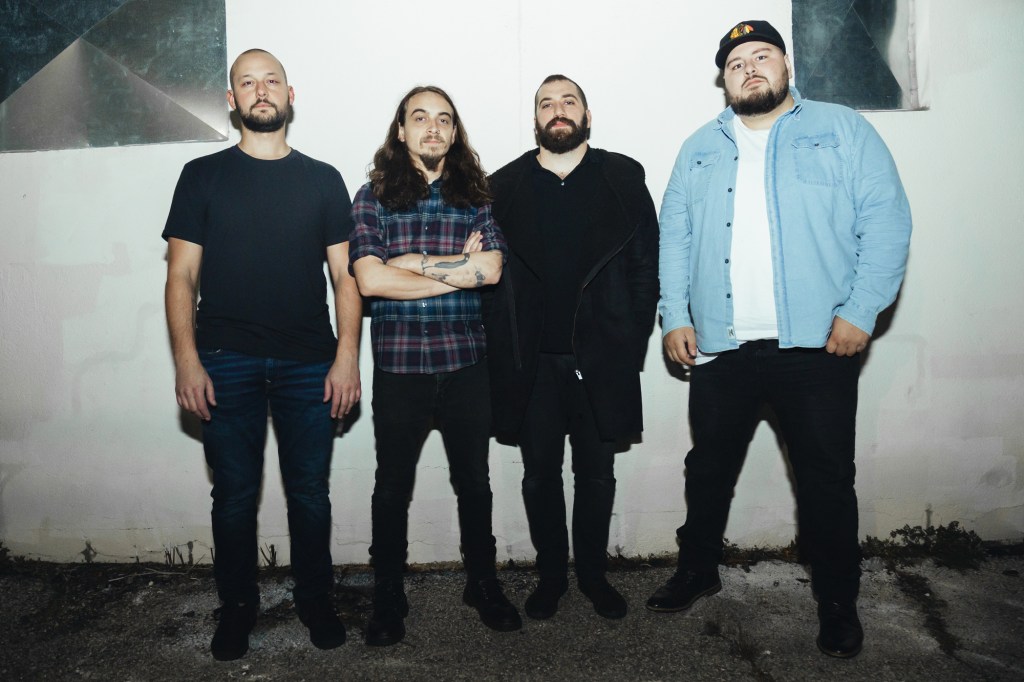 “They really flipped certain songs on their heads,” Lee explains of the sessions, which were crammed into a draining five days during which the band would routinely work from 8 a.m. to 2 a.m.

Morton says he was immediately impressed by the band. “Moon Tooth strikes me in a way that some of the great bands from the Nineties did,” he explains. “There’s this sort of eclecticism about them that I think is rare these days; my reference points would be bands like Faith No More, Jane’s Addiction, Fishbone, Primus. Not that Moon Tooth sounds like any of these bands, but just that idea of this mish-mash of influences and styles played out in a very unique way, For them to stylistically be so diverse and still be able to write really solid, well-written songs and use really solid songcraft is pretty spectacular.”

The band came into the project with serious respect for their collaborators — Lee and Marte cite Lamb of God’s Machine-produced 2004 album Ashes of the Wake as a key early influence — but they had never let outsiders into their process before, and the preproduction process wasn’t always easy. Things got tense during the workshopping of Crux’s more personal songs, some of which address a devastating breakup that Carbone went through, where he felt that he had to choose between his band and his relationship.

“It really just ripped me up,” he says of the split. “This is just this wonderful person; I never knew I could find a teammate like that. And to see it not working because of this thing that I can’t turn my back on, and she didn’t think that I should — which ties into the ‘crux’ theme, being at this kind of crossroads.”

In the studio, he watched as Machine and Morton streamlined the searing ballad “Through Ash” on the spot, essentially deconstructing its existing arrangement and mining it for spare parts.

“‘This part here, this is not a verse — this is a chorus,’” the singer remembers their producers saying. “And I was just having a fucking breakdown over it.”

“That was a whole night of arguing,” Lee adds.

The version of the song that resulted from the turmoil is staggeringly powerful — and the album’s clear emotional apex.

“I like making ’em wait for it; I like slow builds in songs and shit like that, and Machine said, ‘That’s what your solo project is for,’” Carbone recalls. “I just thought, ‘Oh, you motherfucker …’ But I knew he was right.”

Moon Tooth’s Saint Vitus set drives that point home. The lean arrangements of the Crux songs seem tailor-made for the stage, and the band burns through them with megawatt charisma. Carbone beats his chest, grunts to fire up the crowd, and shouts out the band’s new label, Pure Noise; to his left, Lee is a whirlwind, jumping on and off his amps as he effortlessly juggles fingerpicking, tapping, and slide work. The band as a whole seems bigger than the club — and bigger than metal, or any other genre.

“I’m very aware of how most bands will say in interviews, ‘Oh, well, we’re really hard to pin down’ or ‘We mix a lot of different things,’” Carbone said the night before. “And 90 percent of the time, that’s not the case. I don’t mean to sound like it’s a brag or anything like that, but I feel confident when we do say that.”

Decisively, he added, “The proof is the songs.”