A former Byron Bay busker has become the first female soloist to climb to the top of the ARIA charts since 2015.

Toni Watson, who performers under the stage name Tones and I, has knocked Shawn Mendes off the top of the local music sales charts with her latest single Dance Monkey. American singer Lil Nas X has remained in second place, just days before his catchy country rap song Old Town Road was due to break the Australian record for most weeks at number one. 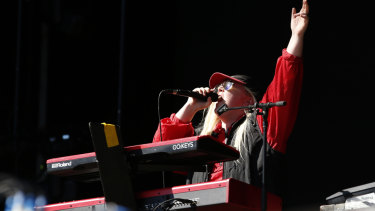 Australian artist Tones and I has topped the ARIA charts – the first woman to do so in four years. Credit:AAP

Watson, who is from the Mornington Peninsula south of Melbourne, moved to Byron Bay last year where she made money by busking on the streets. In February this year, she uploaded her first track to Triple J Unearthed and since then has gone on to play at sold out gigs and even opened Splendour in the Grass in her signature, dressed-down style.

It took eight weeks for Dance Monkey to climb to number one in the ARIA charts and it is the first Australian number one single this year. The last time a solo female artist has topped the local charts was in 2015 when Delta Goodrem reached the number one spot.

Watson described nabbing the number-one spot on the ARIA charts as "overwhelming".

"It feels really unexpected," she said. "I got told by one of my managers before I released Dancing Monkey, 'Don't stress out if this isn't a radio song. People will love it live.' Even when it was number 10 I thought, OK, that's my peak and I'll start declining.

"The song's about when I was busking and how people are impatient. If we're not entertained in the first minute we just scroll on. I could see that was reflected in me busking in the street. People wanted you to perform, to keep going, more, more. So I wrote a song about the pressure of live performance now that we have entertainment just at the click of a button."

Watson's EP, The Kids are Coming, is due out at the end of this month.

"I just want to work hard," she said. "Be happy with myself as a human being. Be supportive of other artists and write music I care about and never, ever write a song for radio."