When Florence Shaw was small, she dreamed of cows. She collected pictures and distributed them throughout her family’s large, run-down house in southeast London, which was soon filled with grazing bovines as far as the eye could see. “I was just completely enamored with everything about them,” she says now. “I had a cow mug and a cow pencil and a cow hot-water bottle and, like, 50 billion stuffed cows.”

Growing up in a setting that she recalls as “ostensibly middle-class, but with very little money,” Shaw was encouraged to follow her passions wherever they led. After the cows came a period of listening to nothing but Oasis’ (What’s the Story) Morning Glory?; by her teens, she’d moved on to life as “a really obsessive Strokes fan, like, almost verging on a bit sad.” Somewhere along the way there was also a nu-metal era and a brief but powerful goth phase. “There was always an obsession going on,” she says. “I would start wearing black and hanging around in attics for a bit, and then suddenly it would be something else.”

Today Shaw puts her restlessly inquisitive personality to use as the lead vocalist for one of the most exciting bands in rock. Dry Cleaning’s debut album, New Long Leg, is due out April 2nd after a pair of 2019 EPs that hit like telepathic firecrackers from another planet. Shaw’s unique lyrical style is a big part of what sets Dry Cleaning apart from a thousand other 21st-century U.K. guitar bands. On songs like the recent single “Strong Feelings,” she recites disjointed monologues in an eerily calm tone over dank, arty rumbles courtesy of guitarist Tom Dowse, bassist Lewis Maynard, and drummer Nick Buxton: “Just an emo dead-stuff collector/Things come to the brain/I spent £17 on mushrooms for you. … I’ve been thinking about eating that hot dog for hours …” The meanings of her words can be obscure or startlingly direct, disturbing or quite funny, and the music is always charged with intense feeling. It’s a refreshingly off-kilter combination that could only come from three seasoned rockers and one person with zero previous experience being in a band.

“It doesn’t feel real at all,” Shaw says. “It feels really weird that this is my job description. But also strangely natural, like I probably should have been doing this earlier.” 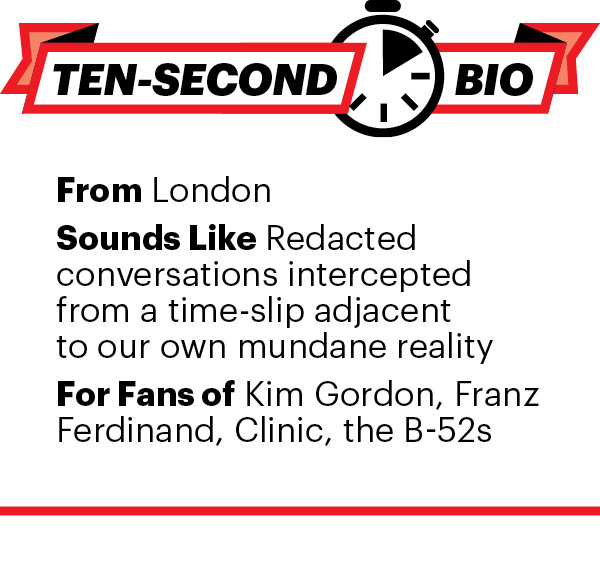 For most of her life, Shaw thought she’d be a visual artist like both of her parents. After studying drawing at art school, she went for a master’s degree at the Royal College of Art, only to find her energy drained by depression. “I got really, really down,” she says. “Completely despondent, couldn’t make anything, didn’t see the point.” She was stuck until a teacher gave her some pragmatic advice: “She said, ‘Look, just make a drawing every day. Make it on a small piece of paper, so it feels achievable. It doesn’t even need to be a drawing of anything.’”

Shaw began scribbling sardonic cartoons about what she was going through, often incorporating snippets of text. “I would begin a drawing, and it would be so lumpy and strange that I felt I had to qualify it with a caption,” she says. “Or some words would come to mind, and I’d be like, ‘I’m just going to write it on there.’ It came from not really giving a fuck about trying to do anything properly. But it felt good.”

Dowse, who met Shaw around 2010 as a fellow Royal College of Art student, was struck by her right away. “She had a really strong personality,” the guitarist says. “I liked her art and the quality of her ideas — these slightly surreal, weird little observations about the world. She’s fiercely intelligent, very emotionally sophisticated. Meeting her was like finding a kindred spirit.”

He was an experienced musician by that point, having had his mind blown by Pavement’s “Shady Lane,” taught himself guitar by strumming along to Sonic Youth’s Sister, and dropped out of university to play in a hardcore band before reaching the end of his teens. Early in his musical career, he got the chance to open for one of his all-time favorite acts, Converge, and he still remembers how seriously his Massachusetts metalcore heroes took their performance at a local DIY space: “They tore it to pieces. They performed as if it was a headline show at Hellfest or something, just giving it 100 percent everything. That was quite formative for me.”

Dowse loved being in bands — loved the noise, the gear, the lifestyle. “We’d form a band for a summer, and that would be it,” he says. “We played Europe quite a lot. You’re still sleeping on floors, and you’re not eating much or getting paid much, but it was just really exciting.”

As his twenties wound down, though, his tastes began to shift, and he went back to art school. “I never thought of hardcore as depressing or dark or scary. I always thought of it more in a joie de vivre sense,” he says. “But slowly I started to grow out of it a little bit. It’s very harsh music at times. It does hurt your ears, and you want a bit of a melody.” 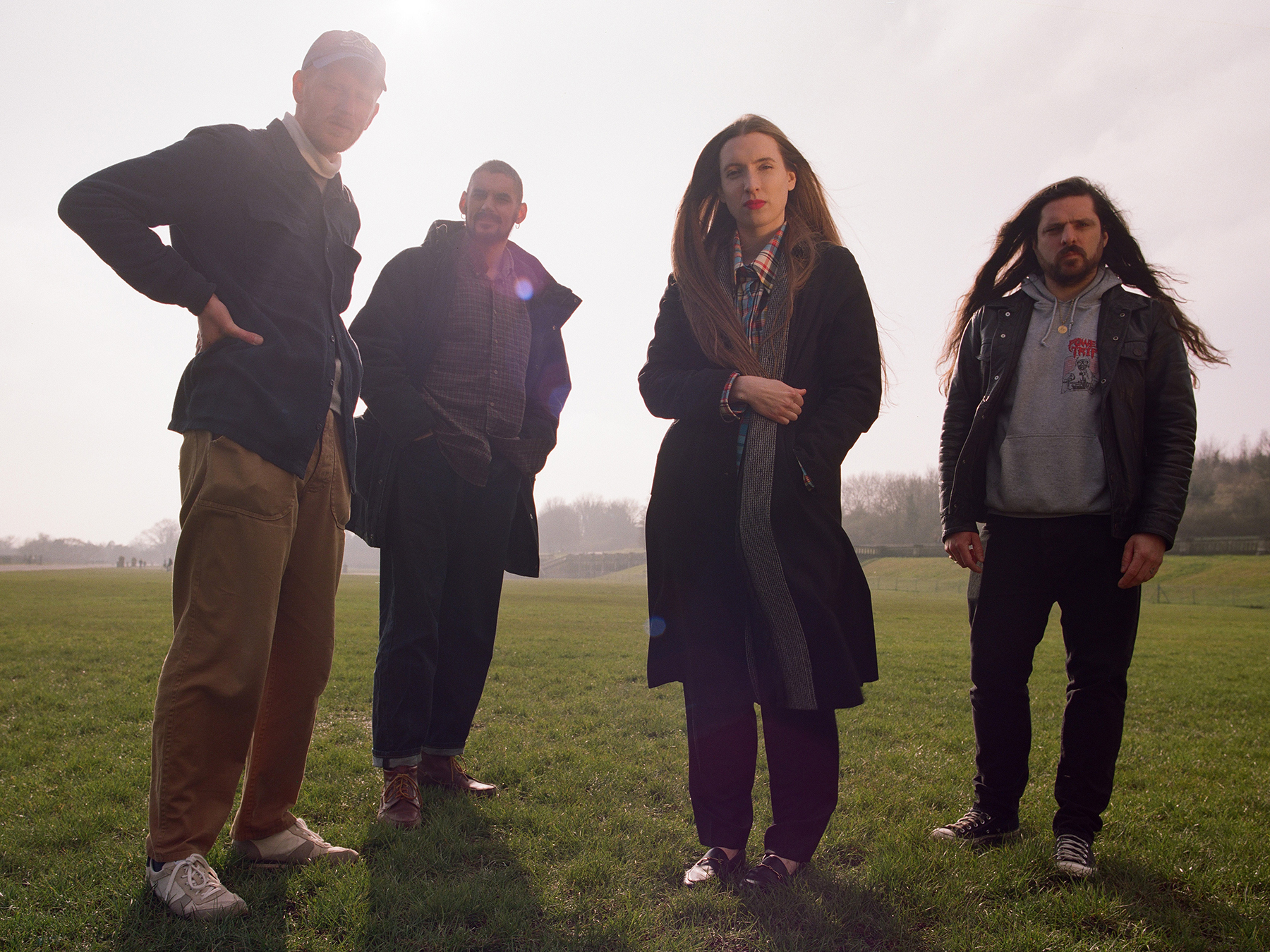 He had a vague idea of making enough money to support himself as a freelance illustrator, but jobs were hard to find after he completed his degree in 2012. “I was on the dole,” he says. “I’d convinced my parents that [the master’s program] would be a good idea because I’d be working, and for two years I wasn’t. It was a really rough patch. Flo is one of those people you can feel vulnerable in front of, so she was one of the few people I actually kept in touch with after school.”

Shaw was going through a difficult time of her own a few years later, in 2017, when Dowse asked her to check out some demos he’d recorded with Buxton and Maynard, mutual friends from an overlapping social circle. “I’d had a fairly devastating breakup, and I was going out a lot and drinking quite a lot,” she says. “Tom told me they were making music together, and I was like, ‘Cool, can’t wait to hear it!’ Then he mentioned the thought of me being the front person. I was immediately like, ‘No way. I can’t imagine something I need less right now.’ It was a firm no.”

But Dowse was persistent. “A lot of people had been offering to sing with us, but it felt like we’d done all that,” he says. “We wanted something different; we just didn’t know what.” Hearing Shaw’s voice over their demos gave him a new idea — “She was like, ‘Ah, these are cool,’ and I could still hear the music when she said that” — and eventually he, Buxton, and Maynard talked her into stopping by one of their rehearsals.

“Nick sent me a text: ‘You don’t have to sing. You can just talk,’” Shaw recalls. The drummer gave her a playlist with Grace Jones’ “Private Life,” a song by celebrity photographer Lynn Goldsmith’s comedic character Will Powers, and other eccentric pop cuts, and she began to warm to the notion.

She entered the rehearsal space armed with assorted found texts — “writing from my old drawings, stuff I’d written on my phone, diaries, things I’d seen in adverts and thought were funny” — and read aloud as the other three played their instruments around her. “I was leafing through this big stack of paper fairly frantically,” she says. “I was crouched on the floor with a microphone, and I was like, ‘I don’t think they can even hear me. It’s fine. Just go for it.’ At the end they were like, ‘That sounded great!’”

She still sounds amused by the fact that she walked out of that room as a member of her friends’ rock band. “It was like when you see those cheesy films about bands, and they’re writing the hit, and there’s a magic moment,” she says. “In my mind, I was like, ‘I’ll just learn how to sing later.’”

Soon Dry Cleaning had an EP, Sweet Princess, and a highly buzzed-about song with “Magic of Meghan,” whose lyrics Shaw wrote during a time when she was “completely obsessed” by the 2018 wedding of Prince Harry and Meghan Markle. “I had just broken up, and I was clinging to that story to distract myself from the abyss,” she recalls. “I transplanted all my normal thinking about my own life onto thinking about their lives for a few weeks.” Then as now, Markle was being hounded by nasty tabloid headlines. “I was really disturbed by how she was written about, how bold some of the racism was in the British press,” Shaw adds. “I still think it’s fucking mean, the way they talk about her. Fuck off!”

After releasing a second EP, the equally ripping Boundary Road Snacks and Drinks, Dry Cleaning signed with venerable post-punk label 4AD. Dowse and Shaw quit their day jobs as university lecturers, and the band crossed the Atlantic in early March 2020 for their first U.S. shows, at the Brooklyn rock clubs Saint Vitus and Union Pool. “It was such an explosion of joy,” says Dowse, who grew up idolizing American bands but had never performed in this country. “New York, for me, is this mythical, magical, musical place. To finally play there was almost like a religious experience.”

Just days after that career highlight, the coronavirus pandemic forced them to abandon the rest of their planned tour and head home to London. Luckily, they had most of their debut album written by that point, and they recorded New Long Leg later in the year with PJ Harvey producer John Parish.

The LP shows a broader palette of sounds for Dry Cleaning, with influences ranging from Augustus Pablo dub reggae to the Black Sabbath and Led Zeppelin records that Maynard, their bassist, is fond of. Many of Shaw’s lyrics come from her writing exercises in a notebook of lined paper: “Sometimes you just can’t be fucked with a lot of topics,” she says. “You’re like, ‘The only thing I care about right now is baked beans.’ Or, ‘The only thing I care about is Star Trek: The Next Generation. That is my interest, and everything else can fuck off.’ And I’ll write whatever I can think of about that, and all my feelings about it. Sometimes it’ll go off into another subject. It’s just a way to make me go.”

She describes “Scratchcard Lanyard,” the album’s tightly-wound lead single, as a revenge fantasy. “It’s feeling quite pissed-off and fatigued with the roles you’re asked to fulfill as a woman past the age of 30,” she says. “The pressure to have children is this sudden thing that descends, like, ‘You’re a carer now.’ Not that I resent any of those things in principle. Mothers are the greatest people in the world. But it was a noticeable thing, that suddenly I have these pressures that my brother and my male friends don’t have.”

“Unsmart Lady” features a basement-rattling stoner-rock groove and lyrics about body image. “‘Fat, podgy, no makeup’ — I was thinking about these things that are supposed to be a source of shame about your appearance, and wanting to use them in a powerful way,” Shaw says. “Just trying to survive when you feel knackered and put-upon and shit about yourself, but you say, ‘I don’t care, I’m great.’”

That feeling of prying some joy out of a cruelly indifferent world courses through New Long Leg. Shaw’s interior monologues feel suited to a year-plus stretch in which many of us have been stuck inside our own heads, and her bandmates’ riffs and rhythms are crying out to be performed loudly at a crowded, sweaty club some day.

“That’s where we want to be, is playing live shows,” Dowse says. “So if that becomes a possibility, I’m pretty sure they’ll stick us in a van and we won’t be getting out of it until 2025 or something.”