Music is not maths, but a lot about it can be understood from maths, and vice versa.

Why a whistle sounds different to a violin, for example, can be explained by the different sound waves produced by each, according to one of Australia's leading mathematicians. 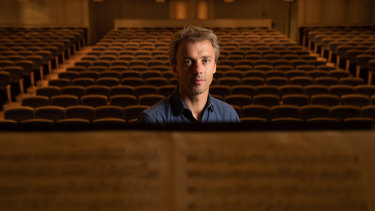 University of Sydney’s Professor Geordie Williamson will be talking about maths and music at the City Recital Hal.Credit:Janie Barrett

"If you look at the sound waves of a whistle, it looks like a sound wave from high school maths, whereas the sound wave of a violin has a very complicated composition," said Geordie Williamson, who is the director of the University of Sydney's Mathematical Research Institute.

The same concept can also be taken into space and understanding the frequency of a drum can help mathematicians and scientists learn more about certain vibrating stars.

"Some stars are vibrating and form a three-dimensional drum, with very interesting fundamental frequencies," said Professor Williamson, who will talk about the link between music and modern maths and physics at the City Recital Hall on Wednesday as part of science week.

"We don't have a three-dimensional drum on earth but we can see what it might sound like by seeing these stars."

The interplay between music and maths has existed for more than 200 years, since the French mathematician Joseph Fourier developed a mathematical solution to understand how heat disperses in a rod.

"He solved the problem beautifully and found that you must solve it first for a fundamental frequency, which led to very interesting connections between maths and music," Professor Williamson said.

Since then, maths has been used to look at why some notes sound good together while others don't and why the same notes can exist on different octaves. 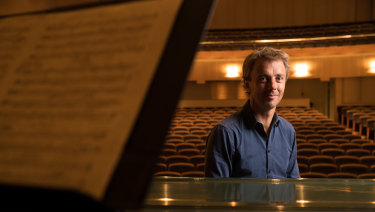 While he is a world class mathematician, Professor Geordie Williamson says he is no great musician.Credit:Janie Barrett

"The Western scale is only one of many possible scales, which can be understood and explained mathematically.

"It's arbitrary that we've decided on this one and other cultures have different scales."

Using music could potentially be a way to engage students who are struggling with maths in school, but it's unlikely to solve the problem, according to Professor Williamson.

"I don't think there's any intrinsic reason people dislike maths and like music," he said.

"I think if you really enjoy music and become aware that some aspects of it can be understood mathematically, this could be a way of increasing interest. But I think we just have a big problem with the way maths is taught."

Professor Williamson emphasises that maths can't explain everything about music.

Even if you look at, and understand, what the soundwave created by a certain note on a certain instrument will look like, you can't predict exactly what will hit your ear.

It's also why the best mathematicians aren't the best musicians.

"I played music as a child and I enjoy music a lot, but I'm not a good musician," Professor Williamson said.

"Bach, for example, is quite mathematical somehow."