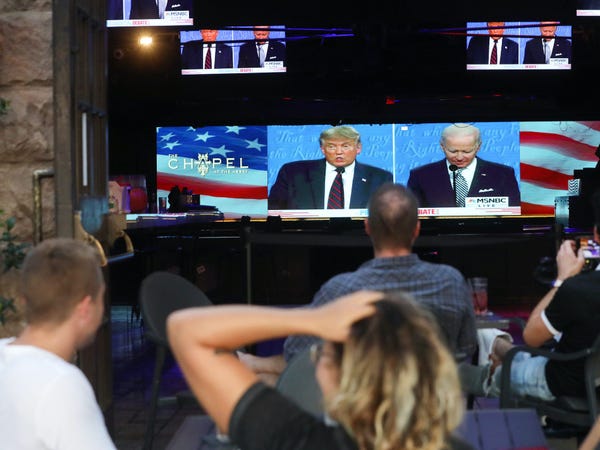 On Thursday night, President Donald Trump and former vice president Joe Biden hosted separate, but concurrent, town halls in lieu of a presidential debate. Trump's was broadcast on NBC, CNBC, and MSNBC while Biden's was broadcast by ABC. On Friday, the final ratings numbers emerged, as reported by CNN: Biden drew in 13.9 million viewers to his ABC broadcast, while Trump drew in 13 million total for his NBC town hall.

Behind the scenes, however, there was also a buzzed-about effort on TikTok that encouraged people to stream Biden's debate on multiple devices in order to bump up the numbers for Biden, seemingly for no other reason than to prevent Trump from winning the ratings battle. The effort drew from a long history in entertainment fandoms that have encouraged fans to stream certain releases to boost chart placement, and it's not the first time online fandom tactics have bled into mainstream politics in 2020.

A TikTok video from popular creator Hank Green, posted on Wednesday, raised the idea of streaming the Biden debate on multiple devices in order to dunk on Trump. It's amassed approximately 1.2 million likes and over four million views.

The town halls are Thursday night and every view on a different platform or device counts toward ratings…just saying!!

While in the video Green notes that ratings "[don't] matter, this isn't how votes happen," he suggests that viewers could watch the debate on multiple devices. In turn, that would prevent Trump from getting the ratings win.

It's no secret that the president is preoccupied with ratings: just months ago, he was bragging about his daily coronavirus briefings netting high ratings as the coronavirus death toll pushed well into the thousands and unemployment soared.

While Green's TikTok took off on the app — it has over four million views two days after he posted it — chatter also proliferated across the app. CNET reported that as of Thursday afternoon, over 350 videos had used the audio from Green's video.

By TikTok standards, those are far from big numbers. In terms of engagement alone, it doesn't match the famous incident in which "TikTok teens and K-pop stans" reportedly mass-requested rally tickets to troll Trump and were credited with tanking his famous Tulsa event.

This time, it's not exactly clear what effect the TikTok campaign had on the ratings, plus, the relevancy of ratings is questionable when considering actual viewership. While Nielsen ratings point to Biden receiving higher numbers, those numbers are based on TV viewership and online streaming figures are not included. The New York Post published an article on Friday declaring that the TikTok effort had "failed," citing that the combined view numbers for three YouTube broadcasts of President Trump's town hall on the CNBC, NBC News, and CNBC Television channels surpassed the ABC YouTube livestream of Biden's.

While the efforts remains unclear, one thing that can be inferred from it is an increasing synergy between politics and modern online fandom.

"NOT US PREPARING TO STREAM BIDEN LIKE KPOP STANS GJNCGUJBCYNV," one comment with over 155,000 likes from @gatto…nero reads.

Others feature phrases like "Stream Joe Biden for clear skin," parroting some of the memeified streaming rallying cries that are prolific on stan Twitter.

K-pop fans are well-known for their streaming prowess, and the comparison makes perfect sense. Fanbases for groups like BLACKPINK or BTS will publish streaming guides outlining best practices to stream on platforms like YouTube or Spotify in the pursuit of platform records or chart placements.

The idea of applying the same sorts of tactics like streaming on multiple devices to Joe Biden's town hall may seem a bit odd, but it also makes sense within the increasingly fandom-esque digital politics landscape. As Makena Kelly reported in The Verge, stans (devoted fans) of Massachusetts Senate candidate Ed Markey are "taking politics by storm," making organic campaign memes and showing support for the candidate online under accounts @barbz4ed that signal their fandom allegiance ("Barbz" are Nick Minaj fans).

The Biden campaign, for its part, has also been focusing on meeting voters where they are online. The campaign recently launched a Twitch streaming channel, and as The Verge's Kelly reported, has cultivated a presence in 2020 video game "Animal Crossing: New Horizons."

No matter whether a streaming push for Biden "succeeded" or "failed," it's another demonstration of how young people on platforms like TikTok engage with politics today.