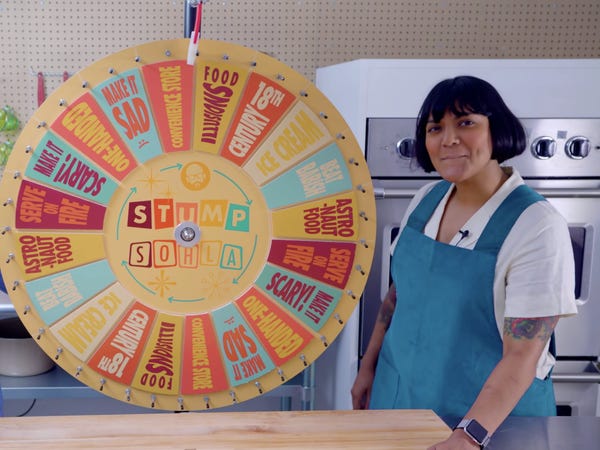 Sohla El-Waylly, the beloved internet-famous chef and restaurateur, now has her own show: "Stump Sohla," a series on the Binging With Babish YouTube channel, now the Babish Culinary Universe.

The show, presented in a game-show format, tests El-Waylly's culinary skills by presenting her with a meal to create in a particular style. However, she'll need to spin a wheel to determine a specific challenge, like cooking one-handed or purchasing all ingredients at a convenience store.

In the first episode of the show, which premiered on Thursday, El-Waylly made mac & cheese but with a historical twist — she had to make the dish in an 18th century style, as determined by the wheel. In it, she cooks over an open flame, makes pasta out of stone-ground flour, and uses "a lot of cheese." The result, of course, looks delicious.

El-Waylly, along with fellow chefs of color Priya Krishna and Rick Martinez, left Bon Appétit video in August following failed contract negotiations that they said would still leave them paid less than their white peers. Following allegations of a toxic work environment and a resurfaced photo of former editor in chief Adam Rapoprt in brownface, the publication and its popular video arm have been undergoing a reckoning.

Prior to Rapoport's departure from Bon Appétit, El-Waylly called for his resignation and said on Instagram that she had been "pushed in front of video as a display of diversity." She said that she had not been compensated for video appearances and that her starting offer at Bon Appétit was $50,000 despite 15 years of culinary experience. El-Waylly told Business Insider that she was offered a contract that would add $20,000 to her base pay following her posts, an offer that left her "insulted and appalled" given that other BA stars allegedly earned much more in per-episode fees.

El-Waylly told Deadline that she was "excited for my new show, not only do I get to spin a giant wheel (what!) but no matter where it lands I know we're gonna have a good time! The wheel's got some wild things going on, and I can't wait to try it all — cook one-handed, light stuff on fire, and even try to beat the Babish himself!"

Per Deadline, new episodes of "Stump Sohla" will typically be released on Saturdays, and it currently has a 10-episode order.

Tags: Binging with, Sohla El-Waylly
Recent Posts
We and our partners use cookies on this site to improve our service, perform analytics, personalize advertising, measure advertising performance, and remember website preferences.Ok