British singer Lily Allen and “Stranger Things” actor David Harbour are one of Hollywood’s most talked-about couples these days and we’re totally here for it. As previously reported by Cosmopolitan, fans started to speculate the pair was an item after they were photographed attending a boxing match together in London. The following month, they were spotted together once again on the streets of New York. After the paparazzi snapped the duo kissing one another, it seemed they were both ready to make their relationship official.

On October 18, 2019, Allen and Harbour made their red carpet debut at the Champions for Change Gala in New York City. In the following months, they continued to be seen at high-profile events and appeared to be happily in love. After a family vacation in Croatia with Allen’s two daughters — Ethel and Marnie Cooper — the pair tied the knot at an intimate ceremony at the Graceland Wedding Chapel in Las Vegas in September 2020. During an Instagram Q&A in April 2021, Allen was asked about her marriage to the actor. “You know, it’s kind of fab. I can’t complain. My husband is a delight and I’m feeling pretty good these days,” the “Not Fair” hitmaker said.

Since meeting Allen for the first time, Harbour has revealed he has lost weight, leaving the BRIT Award-winner to react. Keep reading to find out more.

David Harbour says Lily Allen fell for him at his 'worst, physically' 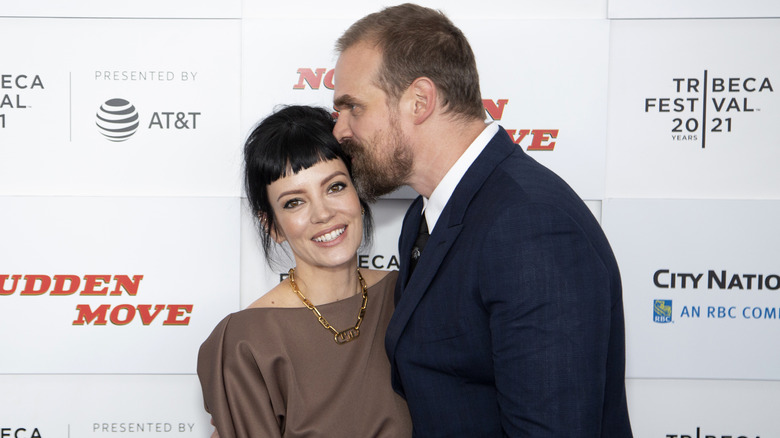 When David Harbour first met Lily Allen, he gained weight for the role of the retired Red Guardian in Marvel Studios’ “Black Widow.” “It’s a true testament to my undeniable charisma when I say that my wife met me at 280 pounds with this beard and this hair,” he jokingly told The New York Times in a new interview, per Us Weekly. “We went on a date at The Wolseley [restaurant] in London, and she really fell for me at my worst, physically and hair-wise.”

Harbour filmed the movie in July of 2019 when he and Allen started to date. In a flashback sequence in the film, Harbour appears to be in a different shape as an undercover KGB spy in the 1990s. However, throughout most of the movie, he is mostly seen with the weight he gained for the role. After Harbour had finished working on the big-screen movie, he went back down to his normal size, leaving his wife a little surprised. “So as the thing went on, I started losing the weight and working out,” he said, adding, “And she honestly has some mixed feelings about it.”

Even though Allen’s reaction may have left him feeling a little irked, he doesn’t hold anything against the “Smile” chart-topper. Since marrying the British talent, he has become a stepdad to her two daughters — Ethel and Marnie — whom Allen had with her previous husband, Sam Cooper.