Amy Winehouse first arrived on the music scene in 2003 and instantly captivated fans with her raw talent. The London-born singer’s debut album “Frank” earned the “You Know I’m No Good” hitmaker critical acclaim and marked a promising start to her career.

In 2006, Winehouse’s sophomore release, “Back To Black,” featured some of her signature songs — “Rehab,” “Tears Dry On Their Own,” and “Love is a Losing Game” — and took her career to new heights. At the 2007 BRIT Awards, Winehouse won her first trophy for Best British Female, while scooping up five awards stateside at the Grammy Awards for the same LP. According to Chart Masters, “Back To Black” sold an impressive 15.9 million copies around the world.

Despite taking the globe by storm with her music, Winehouse was battling drug and alcohol addiction behind the scenes. At just 27 years old, the award-winning star tragically died at her home in Camden due to alcohol poisoning on July 23, 2011, per The Guardian. Undoubtedly, Winehouse’s legacy still lives on continues to influence musicians of today. Now, to honor the 10-year anniversary of Winehouse’s death, MTV plans to release a documentary about the singer’s brief, but impactful life. Keep reading to find out more.

Amy Winehouse's goddaughter is behind the upcoming doc 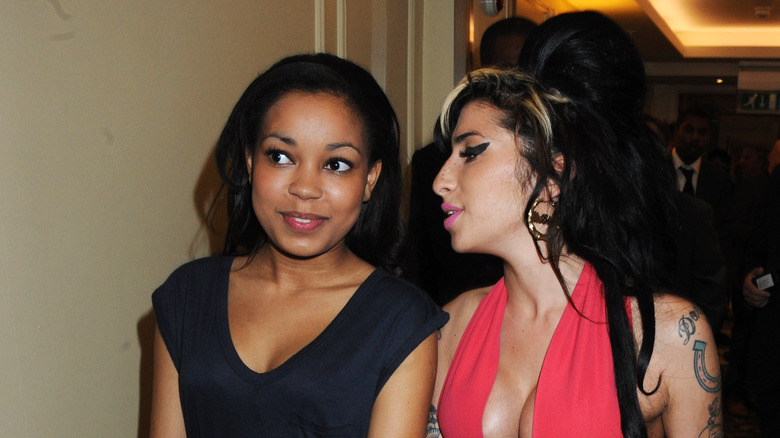 According to Music News, a 60-minute MTV documentary titled “Amy Winehouse & Me: Dionne’s Story” is scheduled to premiere in the UK on July 26. Later this summer, Billboard reports it will air in almost 180 countries on the Paramount+ streaming service in Australia, Canada, and across Latin America and Northern Europe.

The doc will see Winehouse’s goddaughter Dionne Bromfield open up about the heartache she had to deal with after the singer died. “I can’t tell you now just how therapeutic this journey has been for me. Finally, I can move forward into the next chapter of my career knowing that I have dealt with emotions that have been buried for years,” she said in a statement, adding, “I hope this documentary shows Amy as more than just a person struggling with addiction and instead showcases the amazing person my godmother was.” As also noted by Music News, fans will be able to have a glimpse of the adventures Bromfield had with Winehouse while discussing the highs and lows.

Winehouse’s mom, Janis, is also reported to be working on a project titled “Amy Winehouse: 10 Years On” for the BBC, per Music News. While Winehouse’s story is incredibly sad, there is no denying that her legacy continues to live on.

If you or anyone you know is struggling with addiction issues, help is available. Visit the Substance Abuse and Mental Health Services Administration website or contact SAMHSA’s National Helpline at 1-800-662-HELP (4357).

Tags: About, Know, THE, Upcomin, We, What
Recent Posts