The One Show: Alex Jones makes comment about her marriage

The One Show returned tonight for its final instalment of the week, with host Alex Jones joined by Michael Ball for a special programme all about musicals. The pair also welcomed Jason Donovan into the studio with Elaine Page tuning in via video-link as they discussed her upcoming Radio 2 show which would count down the best musical tracks of all time. But host Alex left Elaine having to shut her down after she told viewers three of Elaine’s tunes from the all-important list which will be unveiled on Sunday night.

After a musicals-related video-tape, Alex began: “Well then Elaine, on your radio programme, on Sunday, you’re going to be counting down the top 20 musical songs as voted by the listeners of Radio 2?”

Elaine nodded, as Alex continued: “Three of yours are in there, we won’t ask you to choose your favourite…”

But Michael interjected: “Three?!” with Alex reiterating: “Three of Elaine’s are in there,” before she listed off the tracks.

“Memories, I Know Him So Well and Don’t Cry For Me (Argentina),” she revealed. 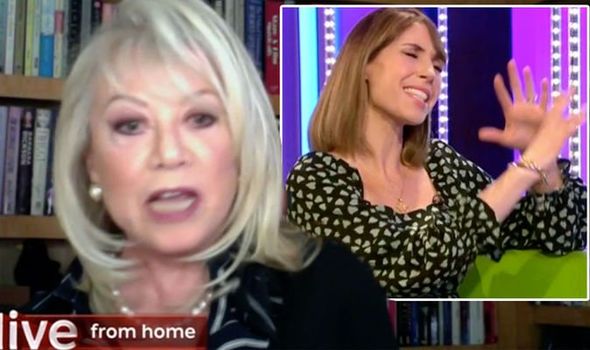 However, Elaine wasn’t happy with Alex’s decision to share the songs with viewers at home.

“No, no, no, no! Alex, you can’t say, I’m not giving it away! You can’t say,” Elaine interjected over the top of Alex, cutting off her line of questioning.

“We aren’t going to say but we are wondering which of yours is closest to your heart,” Alex reassured her.

Elaine managed to laugh off Alex’s previous blunder and got on with revealing her favourite songs, after a bit of confusion.