Bradley Walsh cries as Andrea Bocelli performs for him

Bradley Walsh and his son Barney headed to Italy in Monday’s Breaking Dad as they explored the stunning Lake Garda as well as tried their hand at paragliding. However, the must-see moment from the ITV episode came when Barney surprised The Chase host with a truly breathtaking birthday performance from legendary classical singer Andrea Bocelli.

As his dad marked his 60th birthday, Barney had the gift of a lifetime up his sleeve.

Barney had arranged for Bradley to meet Andrea at his home in Italy as a special present to celebrate the occasion.

“I’m a bit nervous, Barns,” Bradley admitted as he and his son approached the singer’s home.

And the surprises kept on coming when they stepped inside, with Bradley saying when coming face to face with Andrea: “Wow, I can’t believe it.” 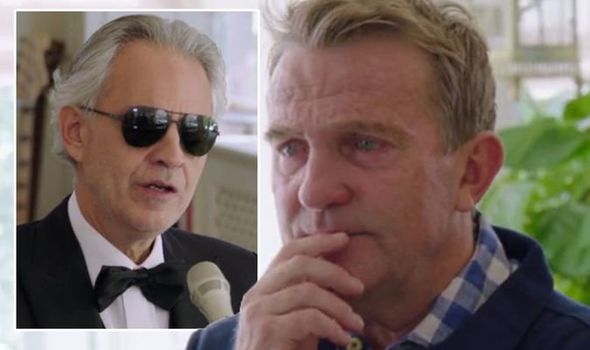 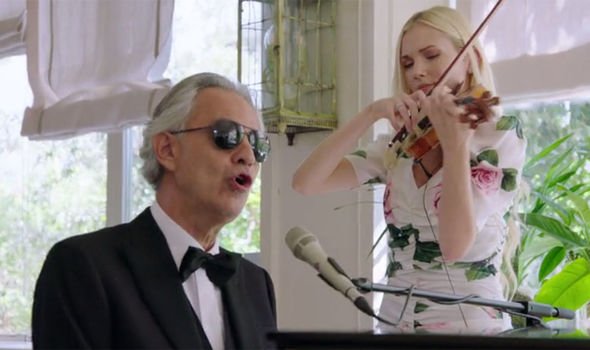 Andrea welcomed the two to his home donned in a tuxedo and ready by his piano.

As Bradley became lost for words, Barney stepped in to explain: “It was my dad’s 60th birthday this year.”

“You have a wonderful son,” Andrea weighed in which made Bradley beam with pride. 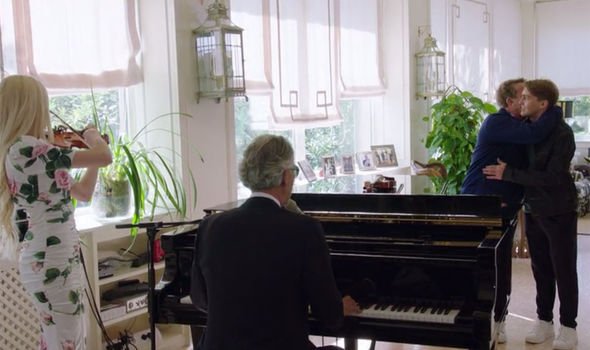 Moments later, Andrea took his seat by his piano as Bradley watched on in awe.

Andrea then introduced the violinist Anastasia who’d be joining him for the rendition of the classical masterpiece.

Overwhelmed by the scenario, Bradley became emotional before the two had even hit a note as Barney placed a supportive arm around his father.

“We will play a very famous song, I think you know it,” Andrea joked.

DON’T MISS:
Bradley Walsh to become grandad as daughter opens up on pregnancy
The Chase: Bradley Walsh furious as contestant’s quizzing past exposed
The Chase: Shaun Wallace warns player ‘I do the explanations’ in spat

Anastasia and Andrea then worked in harmony as they played Time to Say Goodbye for the ITV presenter.

As he watched the two perform, Bradley became overwhelmed with emotion and teared up at the rendition.

Andrea belted out the final note as Bradley and Barney gave a round of applause.

“That was unbelievable,” Bradley said, blown away by what he’d witnessed.

“Absolutely wonderful,” he continued. “Andrea, that is – I – that’s so emotional.”

Barney and Bradley both thanked the singer and violinist for the performance, describing the opportunity as a “true honour”.

And in an adorable father-and-son moment, Barney said Happy Birthday as he gave Bradley a big hug.

Bradley wasn’t the only one in tears as several took to Twitter with the same reaction, as one tweeted: “I cried watching @AndreaBocelli sing one of my favourite songs. On the #bradleywalsh programme tonight #timetosaygoodbye.