‘Freedom Day has turned into closure day,’ declares the theater impresario on the eve of the musical’s official opening, as lead actress Carrie Hope Fletcher voices her devastation on social media.

The theater impresario and composer announced the indefinite closure of his new production on Monday, July 19 – the eve of the musical’s official opening.

The decision comes just days after performances were halted on Saturday after an actor tested positive for the coronavirus.

“Cinderella”, which was co-created by “Promising Young Woman” director Emerald Fennell, began performances at the Gillian Lynne Theater in June.

In his statement, Webber revealed the cast member’s positive result on Saturday prompted producers to cancel two weekend performances and test the rest of the company. Webber said that, aside from the one performer, the tests were negative, as were subsequent tests conducted on Monday.

“Despite this, the impossible conditions created by the blunt instrument that is the Government’s isolation guidance, mean that we cannot continue,” Webber wrote. “We have been forced into a devastation decision which will affect the lives and livelihoods of hundreds of people and disappoint the thousands who have booked to see the show.”

“Cinderella was ready to go. My sadness for our cast and crew, our loyal audience and the industry I have been fighting for is impossible to put into words. Freedom Day has turned into closure day.”

Lead actress Carrie Hope Fletcher has also expressed her devastation over the cancellation. “Completely and utterly gutted,” she tweeted on Monday. “Covid and can well and truly PISS OFF.” 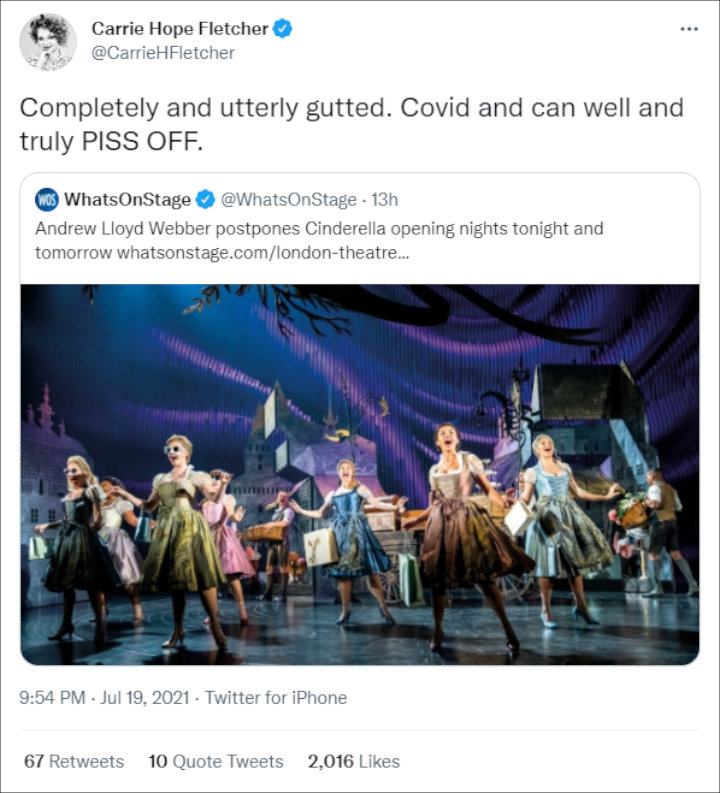 A spokesperson for the production additionally stated, “It’s hard to see a route forward under the current rules, but we will do everything we can to come back.”