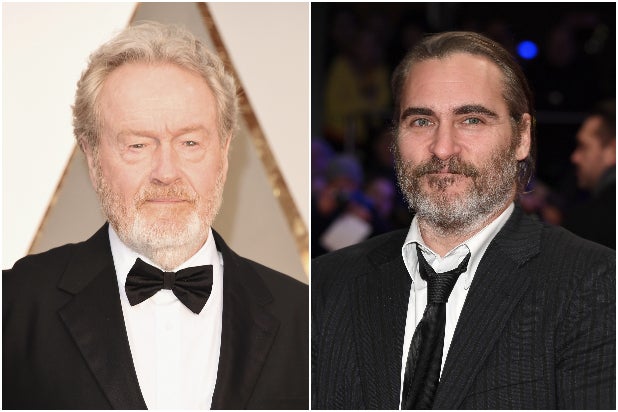 Apple Studios will finance and produce “Kitbag,” the next film from Ridley Scott that’s an epic about the life of Napoleon and will star Joaquin Phoenix as the historic French military leader.

“Kitbag” is based on an original and personal look at Napoleon’s origins and climb to become emperor, as viewed through the prism of his addictive and volatile relationship with his wife Josephine. David Scarpa wrote the screenplay.

Scott will produce “Kitbag” through his Scott Free Productions alongside Kevin Walsh. Scott’s company also has a first-look TV deal with Apple TV+. This also reunites Scott with Phoenix, who previously worked together on the Best Picture winner “Gladiator.”

Scott is working on his film at 20th Century Studios “The Last Duel,” another historical epic that stars Matt Damon, Adam Driver, Jodie Comer and Ben Affleck, which also features a screenplay that was written by both Affleck and Damon.

“Napoleon is a man I’ve always been fascinated by. He came out of nowhere to rule everything — but all the while he was waging a romantic war with his adulterous wife Josephine. He conquered the world to try to win her love, and when he couldn’t, he conquered it to destroy her, and destroyed himself in the process,” Scott said in a statement. “No actor could ever embody Napoleon like Joaquin — he created one of movie history’s most complex Emperors in ‘Gladiator,’ and we’ll create another with his Napoleon. It’s a brilliant script written by David Scarpa, and today there’s no better partner than Apple to bring a story like this to a global audience.”

The number of A-list directors flocking to Apple TV+ is becoming impressive, including Martin Scorsese for his “Killers of the Flower Moon,” Antoine Fuqua for “Emancipation” and the upcoming “Cherry” from “Avengers” directors the Russo Brothers, to name just a few. Apple will next release “Palmer” starring Justin Timberlake.