Former BBC Breakfast presenter Bill Turnbull has spoken candidly about his health many times after he was diagnosed with prostate cancer in 2017. The journalist appeared on Good Morning Britain alongside Piers Morgan and former colleague Susanna Reid to speak about his new show on Classic FM. During his interview, the presenters were keen for an update on his health and how he was coping with shielding.

The Radio host then turned to his beloved pet, who was sitting on his lap with its back to the camera and said: “Piers has been shouting too much, he should listen to Classic FM’s pet anthems to calm down!

“You need to tune in, take a pill and turn off,” he added. 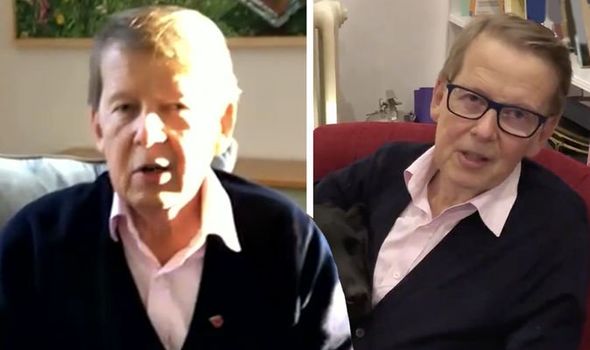 The three journalists then briefly spoke about the US Elections, and Bill’s time covering Barak Obama winning his second term in Washington DC before Piers asked Bill about his health.

“Finally, how are you getting on?” Piers probed. “We’ve been following your illness, you’ve been shielding in lockdown of most of the year…”

Bill explained: “I’m okay, I have good days and bad days – that sort of thing.

“But it’s helped by the fact that I can still work.” 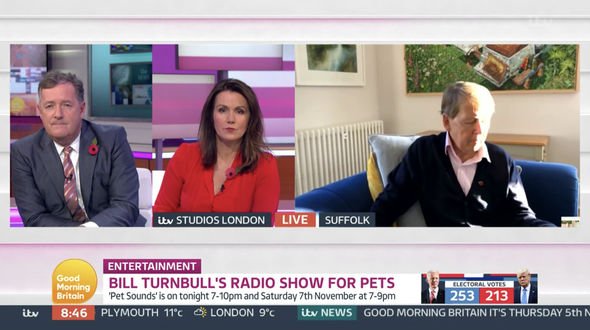 He then mentioned his Classic FM show for the third time, and Piers remarked: “That’s enough plug Turnbull!”

Those watching the interview at home were pleased to see Bill.

“The legend Bill Turnbull next back with beautiful Susanna Reid, can’t wait. It’s great to see you back on GMB Bill, I hope one day you’ll present with Susanna again on GMB. @billtu @susannareid100 @gmb,” one remarked. 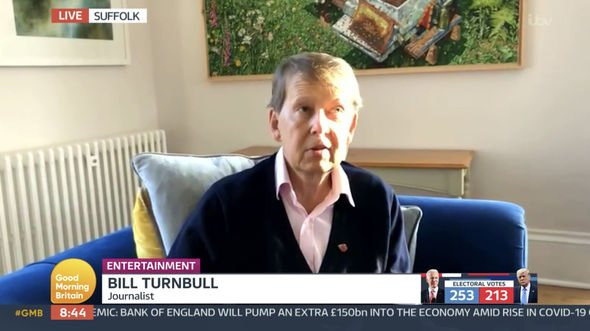 Bill – who has an incurable illness – last spoke about living with cancer in May this year.

During an interview with The Mirror, he said he had “thought a great deal about death” since his diagnosis.

He was told he had prostate cancer four years after stepping down from BBC Breakfast.

The disease has since spread to his spine, ribs, pelvis, hips and legs.

He did briefly halt chemotherapy treatment during the first national coronavirus lockdown.

Bill has also received hormone therapy and radium injections to attack the tumours in his bones.

Alongside medicine, Bill has taken up yoga and meditating which he finds “particularly useful”.