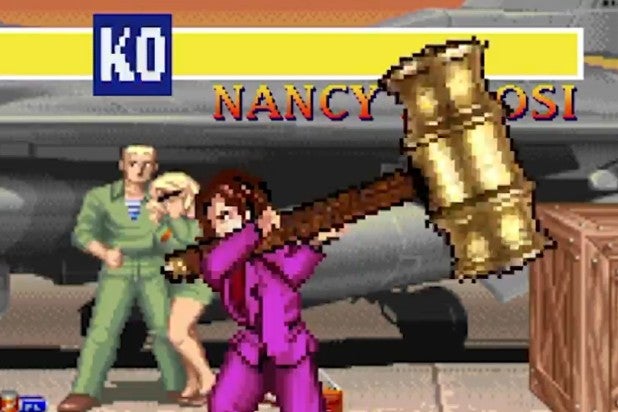 Stephen Colbert was pretty amused Wednesday by House Speaker Nancy Pelosi’s recent tongue-in-cheek tough talk regarding the deadly Jan. 6 riot, and he had a little fun at her expense by reimaging her as a playable character in one of the greatest video games of all time.

So this week in an interview with USA Today, Pelosi was asked if she was scared during the riot, a seditious uprising incited by Donald Trump in an attempt to overthrow the government and remain in power. “Well, I’m pretty tough. I’m a street fighter,” Pelos said, somewhat jokingly. “They would have had a battle on their hands.”

“It’s true,” Colbert said on the latest episode of “The Late Show.” “Nancy’s always my go-to character in ‘Street Fighter.’”

Then he rolled a clip of the classic 1991 arcade game “Street Fighter II,” which revolutionized the video game industry and helped define the entire fighting game genre, for instance by introducing unique playable characters with special moves. In the clip, Nancy faces off against Ken. But her special move — she pulls out an enormous gavel and smashes Ken with it — wins the match. And then we see the victory text: “The Motion Is Carried.”