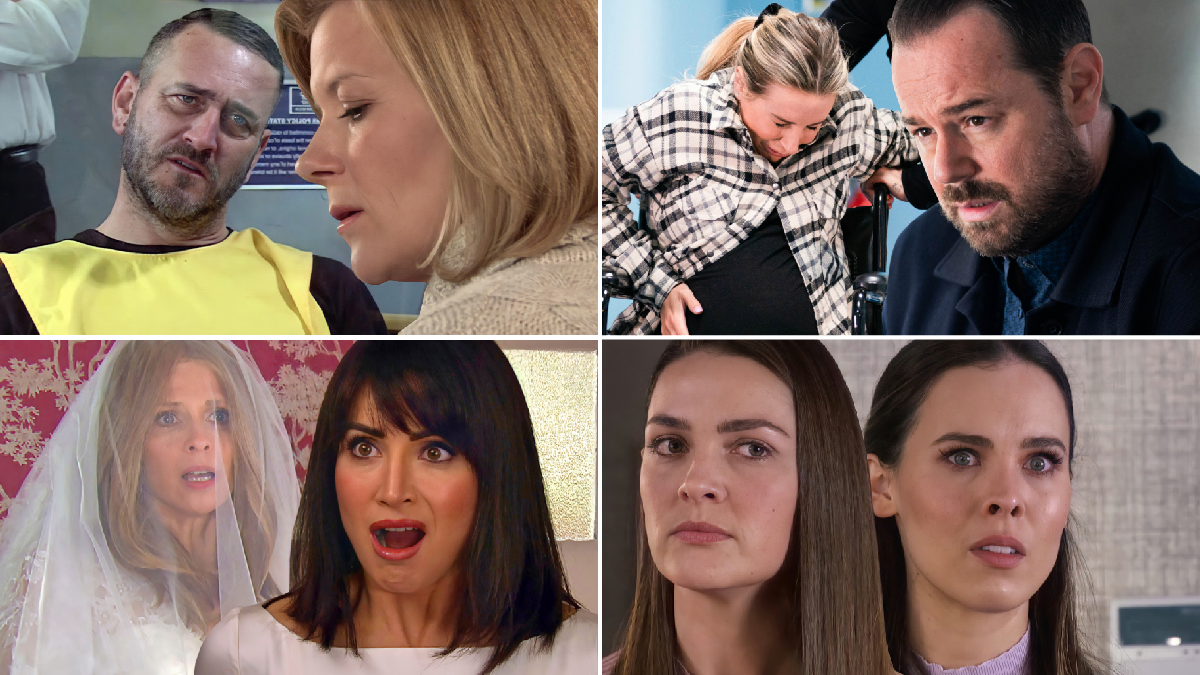 With Euro 2021 causing something of a disruption to the regular soap scheduling pattern, ITV and BBC have, for the first time ever, decided to drop their respective serial dramas in boxset format.

That’s right, as of next Monday, you’ll be able to binge through a weeks worth of action in Albert Square, or watch all of your weekly Weatherfield drama in one viewing!

Pretty revolutionary or what?

And what a week it will be for all of our favourite soap characters, as Coronation Street stalwart Leanne Battersby (Jane Danson) returns to the cobbles, and soon realises she’s as trapped as ever as she faces a huge dilemma.

EastEnders, meanwhile, features a special visit from Mick Carter actor Danny Dyer’s very own daughter Dani Dyer, as she pops up in the show as taxi driver Jeanette, who goes into labour with no-one but Mick by her side!

Leyla Harding’s (Roxy Shahidi) wedding day doesn’t go off without a hitch, so to speak, over in Emmerdale, as she spots nemesis Bernice Blackstock (Samantha Giles) in a wedding dress on the big day.

And Liberty Savage (Jessamy Stoddart) vanishes after making a shocking discovery about Sienna Blake (Anna Passey) over in Hollyoaks, which begs the question just how far Sienna will go to keep her secrets hidden?

Whether you decide to consume your soaps all in one go, or simply ration them out as they air, make no mistake, next week is not one to be missed!

Grieving Nina attempts to steal another bottle of alcohol, but Carla clocks her, and warns her the booze is not the answer. The young woman refuses to listen, and gets into a taxi, much to Roy’s dismay. Daisy, meanwhile, worries for Nina when she witnesses her speaking an older guy named Hughie. Hughie invites Nina back to his hotel, but she sets her sights on killer Corey, who is in the company of Tommy Orpington! Nina wastes little time in revealing all about how Corey killed her boyfriend, but they head off and, as they do so, Nina follows them with Corey’s award in hand!

Tyrone admits that Alina chose his new clothes, and when he shows up at Curtis’ cocktail evening at the bistro, Fiz’s heart sinks. Fiz, however, ultimately has the last laugh. But just what is it that puts a smile on her face? We’re keeping shtum on that one!

Leanne, Nick and Simon return home from their safe house, but settling back onto the cobbles proves more difficult that they hoped, as DS Glynn pops round to reiterate the importance of Leanne being honest in court, reminding her how crucial her evidence is to put Harvey away. With Leanne having promised Harvey that she would refrain from testifying, she’s evidently trapped in a difficult situation. But will she do the right thing?

Mick assures Linda that, come hell or high-water, he will attend the scan with her. However, when Jeanette the taxi driver goes into labour, he’s forced to stay put. Linda, meanwhile, waits at the hospital – without Mick. Later, Mick attempts to explain himself, but Linda has made a decision about the baby. Mick explains he will love said baby no matter what, but Linda is concerned about Max being involved in the child’s life. What will she do?

Sonia attempts to find out what Terry’s plans are for Father’s Day. Terry, however, is oblivious to the special occasion. He later steps in to assist Kathy with the café, and boasts to the customers about his daughter, which leaves Sonia inspired. Kathy’s impressed to see things running smoothly and agrees to take his number! Could this be the beginning of a lovely romance? Well, ‘lovely’ might be a bit of a strong word given it’s Walford we’re talking about!

Ben spots Callum getting into a cab with Whitney. They’re heading off to visit Fitzy following his stabbing ordeal, but to Ben it looks like something else entirely. Callum opens up to Whitney about how he’s feeling in the wake of the incident, and she recognises it’s his PTSD. Will Callum get the help he needs? And will Ben realise that jumping to conclusions doesn’t do anyone any favours?

Ben offers to accompany Aaron on his trip to find Liv and, after some difficulties, they eventually find the caravan park. Liv is in the throes of a seizure, and it turns out that this is, in fact, her second seizure in as many days. Sandra is disturbed to realise just how self-destructive her daughter’s behaviour has been. The question is: will Liv return home with Aaron? Or will she stay with Sandra?

Leyla’s desperation to get Liam down the aisle is mirrored by Bernice’s determination to stop the wedding, and as the day of the ceremony arrives, Leyla finds Bernice in a white dress! Is Bernice up to her old tricks? Will she storm the wedding and profess her undying love for ex Liam? Or will Liam perhaps marry his former flame over Leyla? Decisions, decisions.

Wendy tries to persuade Luke to come clean to Victoria about his fight with Lee, and he sets out to do just that. As they talk, however, Victoria finds herself more and more confused, and tells Luke that she’s going to need him to be fully honest with her if they’re to ever stand a chance at making it through this. Wendy, however, shows up and reluctantly tells Victoria the rest of the tale, leaving her in shock. Is there any coming back from this?

Damon wants to ask Liberty to move in with him. Liberty, however, gets wind of the fact that he’s planning something special, but Brody covers for his pal, claiming that it’s he who’s behind the surprise, and he wants to treat Summer with the perfect the perfect wedding shoes. Liberty, ever the kindhearted soul, offers to help, and drops the shoes off at Summer’s place. But as she arrives, she overhears a damning conversation between Sienna and Summer! She confronts Sienna, who then threatens her little sister!

Donna Marie is grateful to Jack, who has allowed her to crash at his place. She thanks him in the middle of the village, which Juliet oversees. An awkward encounter soon follows, as Juliet wrongly accuses her mum of having sex with Jack!

Shaq opens up to Verity about what really happened the day before his wedding, revealing that he discovered that his dad wasn’t actually his real dad. Verity advises him to speak to Misbah, but will he discover who his real father actually is?

Alternatively, all episodes of Coronation Street, Emmerdale and EastEnders will be available to stream as a boxset on the ITV Hub and BBC iPlayer respectively.