Matt, 42, and his Countryfile co-star Anita Rani, 42, were on hand to present the most recent instalment of the BBC show, learning how the 11th Century castle is still standing in a modern world. The pair learnt about every aspect of the grounds, from the cleaning process to what features lie within the grand rooms of the fortress. As the host went to try and find who owned the establishment, he got rather distracted and ended up beginning his interview by asking his guest about the doors of the complex.

Walking up to one of the entrances of Bamburgh Castle, the presenter knocked on the milk-bottled shaped door.

“I hope the current resident’s in,” Matt remarked before noticing there was actually a doorbell he could ring.

“Hang on. Well, I suppose it is the 21st Century,” he commented before guest Andrew answered the door to the programme’s host.

After brief introductions, the former The One Show star decided to kick things off by expressing his “love” for the door.

Offering his expertise, Andrew then explained a bit more about the history behind the entrance as the presenter was so distracted. 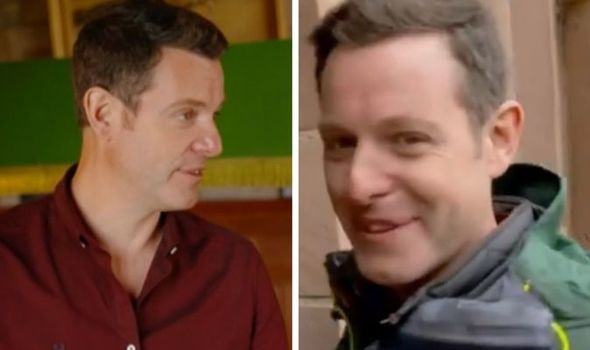 The guest said: “Well, we know it locally as the milk bottle door because of its shape. Looks like a milk bottle.

“But this weird shape it is is so if you were a knight being chased and you had your helmet on and all your gear on you could still ride through the door.

“You didn’t have to dismount,” the guest added before stating he “hadn’t tried” the concept himself.

Matt joked it was “ideal for the cameramen” to get through before the presenter could ask the questions he really wanted answers to.