The Bachelorette contestant Dale Moss didn’t realize what he was getting himself into when he decided to sleep over at Clare Crawley’s place during their one-on-one date during last night’s episode.

Clare decided to send the remaining guys home to pursue a relationship with Dale.

She also told him that she was falling in love with him, even though they hadn’t spent too much time together.

While the other guys thought she was crazy to give up The Bachelorette journey for one guy after 12 days, Clare knew what she wanted.

And surprisingly, Dale was open and he accepted her desire to take things to the next level.

After their proposal went public on The Bachelorette during last night’s episode, Dale took to social media to speak out about everything that had just played out.

And he had the sweetest message for Clare.

“Never a point I won’t show up for you,” he wrote, tagging Clare in the post and sharing a rose. 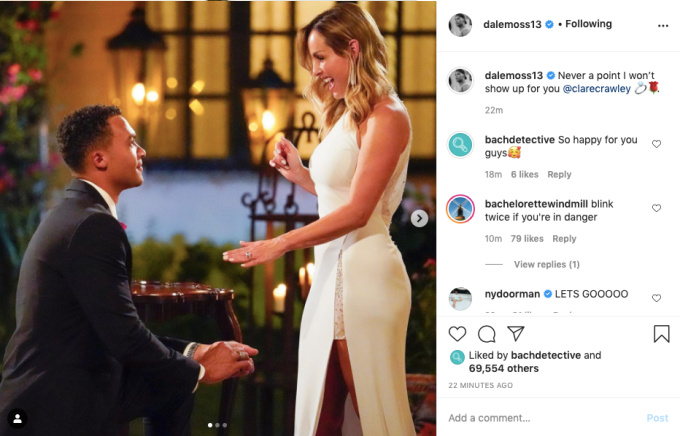 Fans were so excited for them as they celebrated their proposal online and on the show.

During the episode, Dale was put on the spot as Chris Harrison told him that he was getting a ring and that Dale could propose to Clare that night.

Even though editing may have made it seem that he was questioning everything, he showed up and proposed to her. And based on his sweet Instagram message, it sounds like he’s there for her.

While it may be hard to believe for some viewers, Dale and Clare believe they have found everlasting love. This morning, the couple appeared on Good Morning America together.

Clare has always been sold on Dale. She told him during the show that she would take a lie detector test to prove her feelings for him.

Chris Harrison will dig into this claim next week for a brief interview with the couple, which will count as their After The Final Rose segment.

The Bachelorette airs Mondays at 8/7c on ABC.