Viewers of the hit BBC sci-fi show Doctor Who have discussed one problematic blunder of the show for a decade – the fate of the Daleks’ homeworld Skaro. Skaro was destroyed by an ancient Time Lord but somehow was referenced again in 2010, an error that has been puzzling viewers ever since. Thankfully, there is now an explanation.

According to Screen Rants, one section of the manual says: “NB Study of the timeline of Skaro indicates several temporal anomalies relating to its destruction and subsequent reconstruction that are currently being investigated.”

In the series, the events of the past are fluid, with the time-travelling situations bringing a complex element to the storyline.

Former writer of the show Steven Moffat told San Diego Comic-Con in 2008: “It is impossible for a show about a dimension-hopping time traveller to have a canon.” 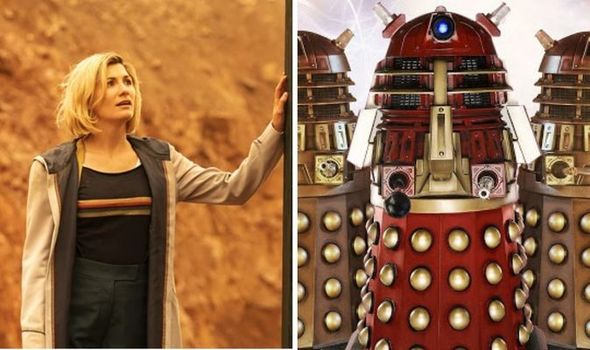 The Daleks also have travel technology to challenge the Time Lords, which explains why the plot can still fall into place with the restored Skaro in the modern instalment of Doctor Who.

By this logic, it’s possible that the destruction of Skaro happened in the Time War itself, but the Daleks used their own time travel technology to rewrite history.

Meanwhile, fans have been excited to hear former sidekick Rose Tyler from the show’s early days is making a comeback to the series in a huge twist.

Rose Tyler (played by Billie Piper) joined the show in the first series back in 2005 and starred alongside the ninth and tenth Doctors.

Actress and former singer Billie Piper was a hit with fans in her portrayal of Rose, who was introduced in the BBC revival of Doctor Who as a new travelling companion of the Doctor.

Her character was key in the first series to introduce new viewers to the story of Doctor Who, which had not aired regularly since 1989.

Rose was last seen in the Doctor Who world in 2013 when she appeared in The Day of the Doctor, a special episode marking the 50th anniversary of the hit sci-fi series.

The end of her time as a key character saw her trapped in a parallel dimension with a double of the Tenth Doctor (David Tennant).

But according to Comic Book Resources, an alternative version of the character is how Rose will make a comeback in the comics.

So while fans won’t see her interacting with the Doctor as a companion once again, she will continue her story with separate adventures of her own.

Just last week, Billie Piper shared to her 518,000 Twitter followers a post marking the anniversary of Rose’s character being introduced to the show alongside Christopher Eccleston’s Ninth Doctor.

The tweet reads: “#OnThisDay 2005: Dr Who returned to television after a break of 16 years. Christopher Eccleston was the ninth doctor while Billie Piper played his companion, Rose.”

On top of this, the return of Christopher Eccleston as his iconic Ninth Doctor has been teased in a new trailer released.

Eccleston will step back into the TARDIS for the first time for a series of audio dramas. Three separate stories will see the Ninth Doctor accompanied by a new mysterious companion named Audrey (played by Jayne McKenna).

In the meantime, the Doctor Who universe fans are also speculating who could replace Jodie Whittaker as the next Doctor.

The latest theories state that two-time Oscar-nominated actress Carey Mulligan could be set to return to the BBC show after appearing with the 10th Doctor David Tennent in an earlier season.

BBC fans will remember the notoriously creepy Weeping Angels which Sally inadvertently helped to defeat with the Doctor.

Other names thrown into the hat have been I May Destroy You’s Michaela Cole as well as comedian Richard Ayoade.

Doctor Who will return to BBC One later this year.