(Refresh for updates) The second impeachment trial of Donald Trump has formally begun.

Carried live on all the cable newsers and broadcast networks starting just after 10 AM PST, the first portion of the tribunal of the former Celebrity Apprentice host for his role in inciting the murderous attack on the Capitol on January 6 will primarily be procedural.

President Joe Biden said today that he will not be watching the proceedings. However, if you thought there wouldn’t be any fireworks today out of the Senate, you might want to think again – it got hot and heavy pretty quick. 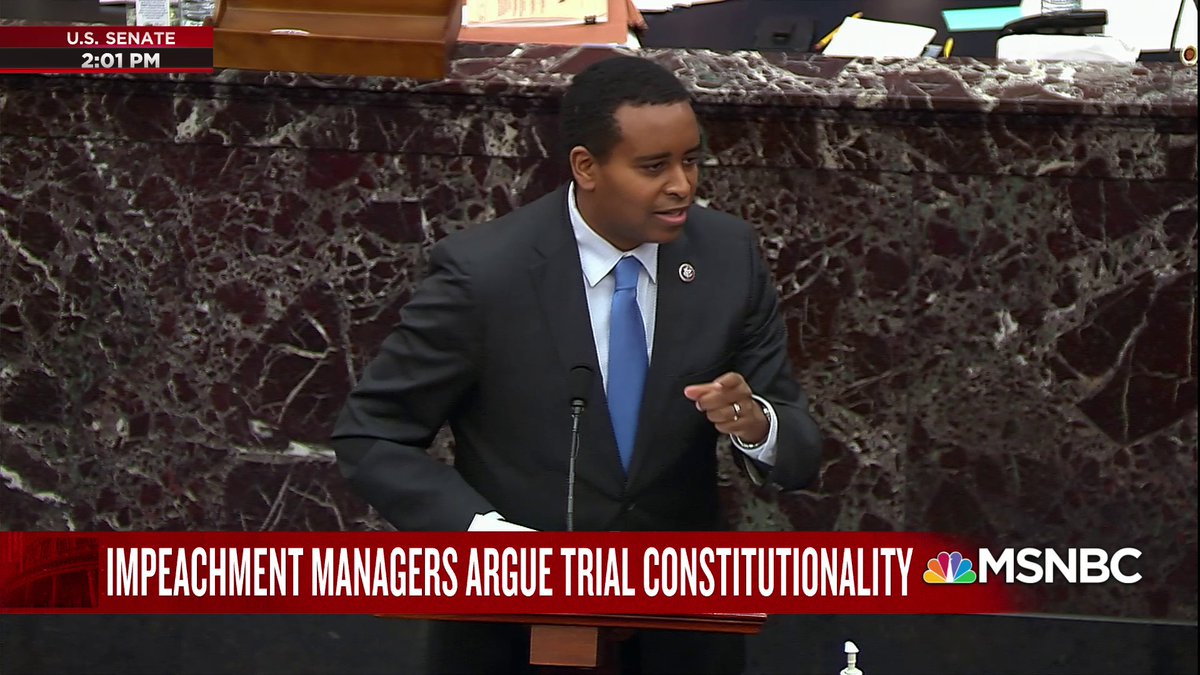 Things starting off on a low burn with prayers and the pledge of allegiance, before Majority Leader Sen. Chuck Schumer (D-NY) introduced a bipartisan motion laying out the format and rules of the trial. With the exception of Se, Rand Paul (R-KY), all 100 Senators wore masks in the chamber this morning in accordance with coronavirus safety protocols. 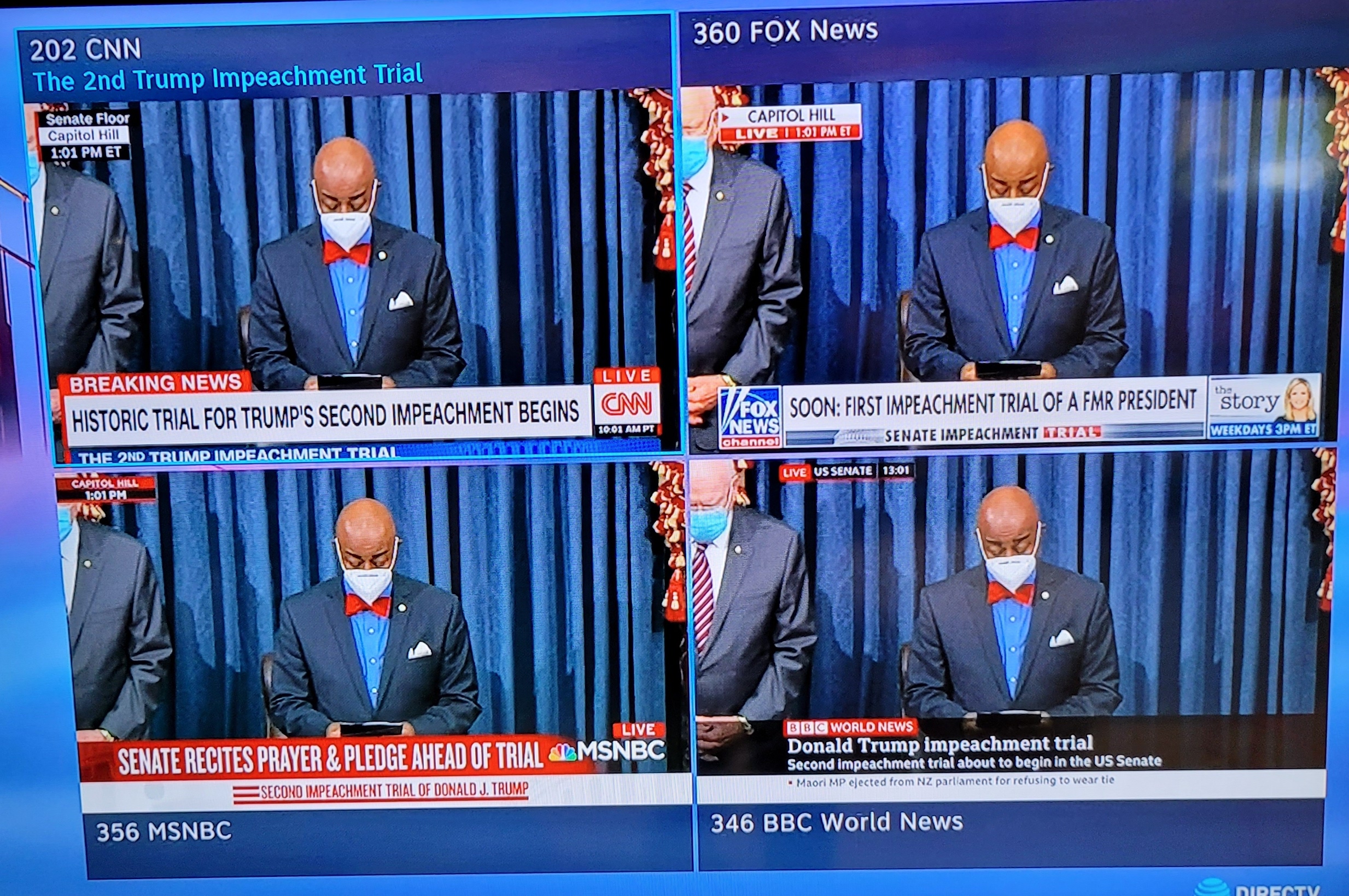 Needless to say, as the roll-call commenced, CNN and Fox News Channel went to commentary on the proceedings as their cameras stayed in the upper chamber. MSNBC stayed on the Senators actually voting. Trump was charged with a single article of impeachment last month for an “incitement of insurrection” against the federal government and “lawless action at the Capitol.”

In that context, the main act was a four-hour argument on the actual constitutionality of impeaching a president who is now out of office.

A number of GOP Senators, like Sen. Paul, have made it clear that they think this latest indictment against Trump has any real jurisdiction. Based on precedent and interpretation of the Federalist Papers, a wide swath of legal scholars agree that Trump can be put on trial. Trump’s defense, supporters and would-be proteges rubbish that POV and want the trial over before it has truly kicked off

On every major channel in the land, lead impeachment manager, Rep Jamie Raskin of Maryland started his presentation declaring their case is based on “cold hard facts, it’s all about the facts.”

In a move telling of how strategically the Democrats intend to prosecute the matter, the former constitutional law professor then played a feverish video of Trump on January 6 urging the MAGA mob to head to the Capitol and the siege of Congress as the Senate was in the process of ratifying the electoral college vote. With no small irony, a significant portion of the video was the speech that then Majority Leader Mitch McConnell (R-KY) gave that day savaging Trump’s attempt to contest the outcome of the election and Joe Biden’s clear victory. The there was more of the mob inside the Capitol, chasing police officers as what sounded like gun fire went off – as you can see:

It was visceral, violent, scary, and, as more and more footage of the horrific events of last month were shown, it was scathing.

“If that not is not an impeachable offense, then there is no such thing,” said Rep. Raskin when the video concluded. Trump “wants you to believe the Senate is powerless,” he added

After the House impeachment managers make their jurisdictional presentation today, defense lawyers David Schoen and Bruce Castor Jr will have two hours of their own to try to kill the case out of the gate. Even in an evenly divided Senate looking to vote along party lines, the Montgomery County, PA D.A., best known for not prosecuting the now incarcerated Bill Cosby over 15 years on sexual assault claims and the civil rights and criminal defense lawyer from Alabama are likely to come up short.

Following a vote on the constitutionality of the actual case, the trial proper will commence. A similar motion to hamper the impeachment failed 55-45 last week, with Utah’s Mitt Romney and nine other Republicans voting with the united Democrats.

However, with Trump not scheduled to be a witness, the math isn’t looking so good right now for an impeachment of the ex-POTUS.

The Democrats needs 17 Republicans to join them, a figure that seems out of reach. A vote on Trump’s historical second impeachment is anticipated to come on Valentine’s Day or, ironically, President’s Day itself.

Before things even formally started in the Senate chamber on Tuesday, the impeachment managers filed one more pre-trial brief. The 33-page document hit back on Team Trump’s own filing that the 45th POTUS isn’t culpable for inciting the insurrectionists, putting the lives of then VP Mike Pence, Speaker Nancy Pelosi and other members of Congress in harm’s way.

“President Trump’s pre-trial brief confirms that he has no good defense of his incitement of
an insurrection against the Nation he swore an oath to protect,” the brief says (read it here).

“Instead, he tries to shift the blame onto his supporters, and he invokes a set of flawed legal theories that would allow Presidents to incite violence and overturn the democratic process without fear of consequences,” it adds “His brief—in which he refuses to accept responsibility for his actions—highlights the danger he continues to pose to the Nation he betrayed. To send a clear message to the Nation and to all future Presidents that efforts to undermine our democracy through violence will not be tolerated, the Senate should convict President Trump and disqualify him from ever holding office again.”

While Trump aims to throw his knuckle dragging and heavily white supremacist supporters under the legal bus, law enforcement is systematically rounding up ring leaders. Over 200 individuals have been charged for the assault on Congress last month. Among those snagged so far by the authorities are several current and former members of the military and the police, including at least one ex-FBI official.

Trump’s first impeachment ended in an acquittal on February 5, 2019 with Sen. Romney the only member of the GOP to vote against the then President.

Never one to hide his distain of his predecessor, the current President was curt in his perspective on the current impeachment.

“We have already lost over 450,000 people and we could lose a whole lot more if we don’t act and act decisively,” Joe Biden said at an Oval Office meeting with business leaders today on Covid-19 relief. “A lot of people, as I have said before, children are going to bed hungry. A lot of families are food insecure. They are in trouble. That’s my job. The Senate has their job and they are about to begin it and I am sure they are going to conduct themselves well. That’s all I am going to say about impeachment.”