The royal couple sat down with friend Oprah Winfrey last week to open up on their decision to quit their roles as senior working royals and why they left England. Prince Harry and Meghan Markle have previously insisted they chose to move to California and step back as senior royals to protect their privacy, expressing their dislike for the UK media. Ahead of their interview airing on CBS and ITV, Andrew Neil stated he never wants to hear from the couple again.

Appearing on Good Morning Britain, Neil stated: “I must confess I found it difficult to get across the detail of Nicola Sturgeon’s problems and Meghan and Harry.

“I understand this couple want privacy and what I have decided to do is respect that.

“They want their privacy and so Mr and Mrs Markle of Montecito, California, I will treat with the same privacy of every other couple.”

“Will you be watching the interview then Andrew?” Susanna Reid asked. 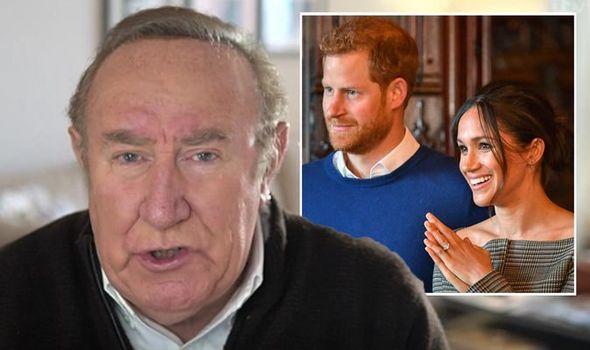 Neil hit back: “I will not be watching the interview and I don’t want to hear from them ever again.

“The more they fade into oblivion, the happier we’ll all be.”

So far two teaser clips from the interview with Oprah Winfrey have been released and show Harry detailing his fear history “would repeat itself”.

I’m just really relieved and happy to be sitting here talking to you with my wife by my side.”

Looking at a photo of himself as a child with his mother, Princess Diana, Harry continued:“ Because I can’t begin to imagine what it must have been like for her going through this process by herself all those years ago, because it’s been unbelievably tough for the two of us.

“But at least we have each other.”

Harry went on to share: “My biggest concern was history repeating itself.”

Meghan meanwhile was not heard in the clip but Oprah asked the couple: “Were you silent or were you silenced?”