HOPES of Glastonbury taking place next year seem to be all but over.

I can reveal bosses have told their booking team to stand down in what is the clearest indication yet the festival will not go ahead.

It means that headliners Kendrick Lamar, Sir Paul McCartney and Taylor Swift — who were due to play in 2021 having missed out when the festival fell victim to the pandemic in June — will miss out again.

A Glasto source said: “The bookers have been told they’re not needed for the summer. It’s effectively post- poning the festival for a second year running, which is absolutely gutting.”

This year’s Glastonbury would have been a 50th anniversary celebration. But it was called off along with other big events including Reading and Leeds festivals, the Olympics and the Euro 2020 football tournament.

The insider added: “They think the first festival of next year will be Reading, which is in August, and even that’s unlikely.”

Earlier this week, Glasto co-organiser Emily Eavis said there was “huge uncertainty” over it going ahead. And Macca admitted the date wouldn’t be in his diary.

He said: “This is the problem, the thing we do is we get 100,000 people closely packed together with flags and no masks — talk about a superspreader. I’d love it to be in my diary but I have a feeling it’s not going to be.”

Now there are worries the festival could go bankrupt. Back in June, co-organiser Michael Eavis said: “We have to run next year, otherwise we would seriously go bankrupt. It has to happen for us, we have to carry on. Otherwise it will be curtains.”

A world without Glasto is one I don’t want to live in.

THEY say imitation is the sincerest form of flattery. And it seems Dua Lipa was falling over herself to make sure Celine Dion knew she was a fan.

Nine months after the My Heart Will Go On singer first rocked a psychedelic patterned two-piece, Dua has put her stamp on the look. 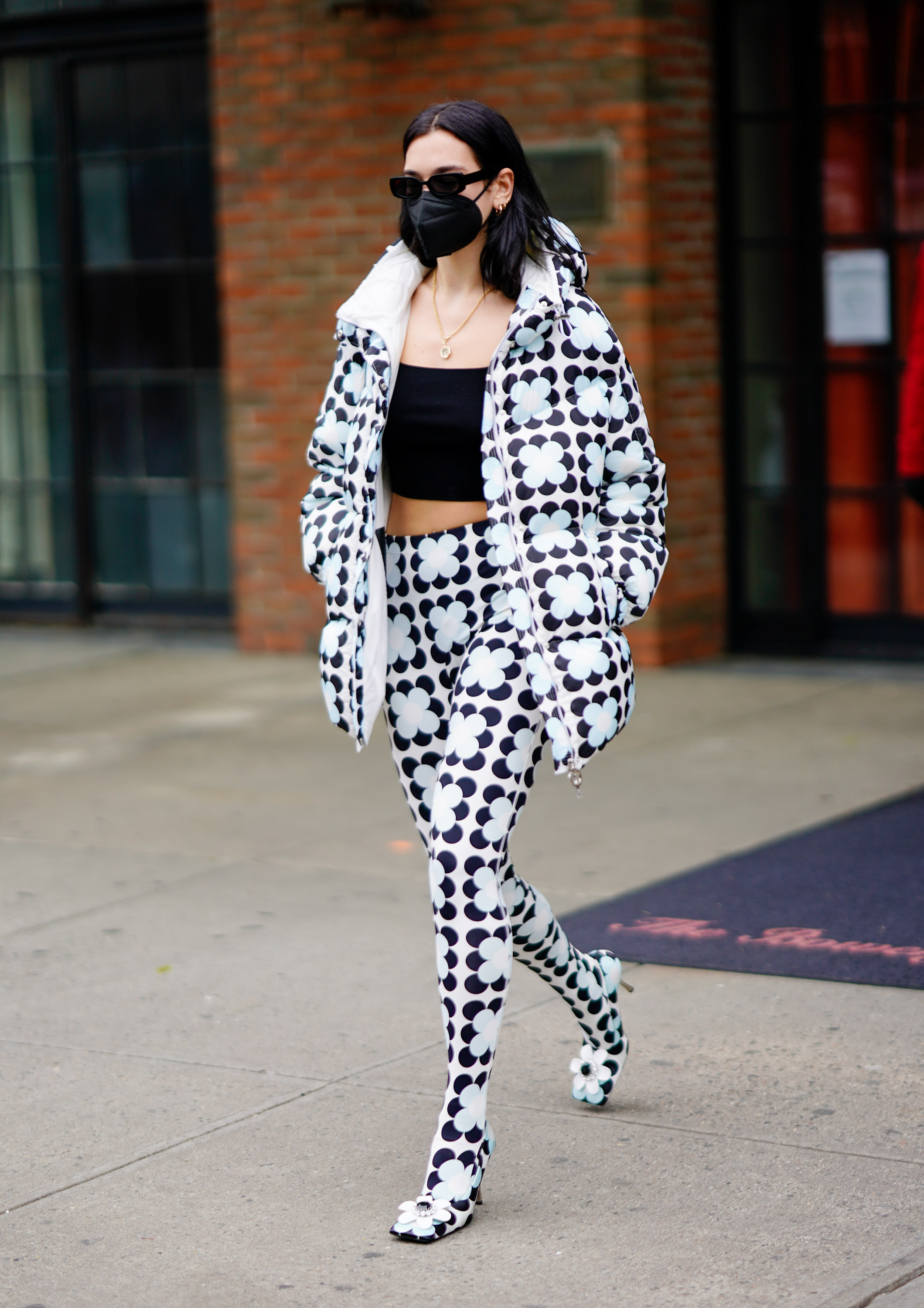 The English star was pictured in New York wearing a striking black and white outfit which reminded me of Celine’s get-up.

Dua is in the Big Apple ahead of her performance tonight on Saturday Night Live.

She will spend the festive season with her boyfriend Anwar Hadid – and they have plenty to celebrate.

Along with the release of her hit album Future Nostalgia in March, this is the first Christmas for Anwar’s niece – Gigi and Zayn Malik’s tot. 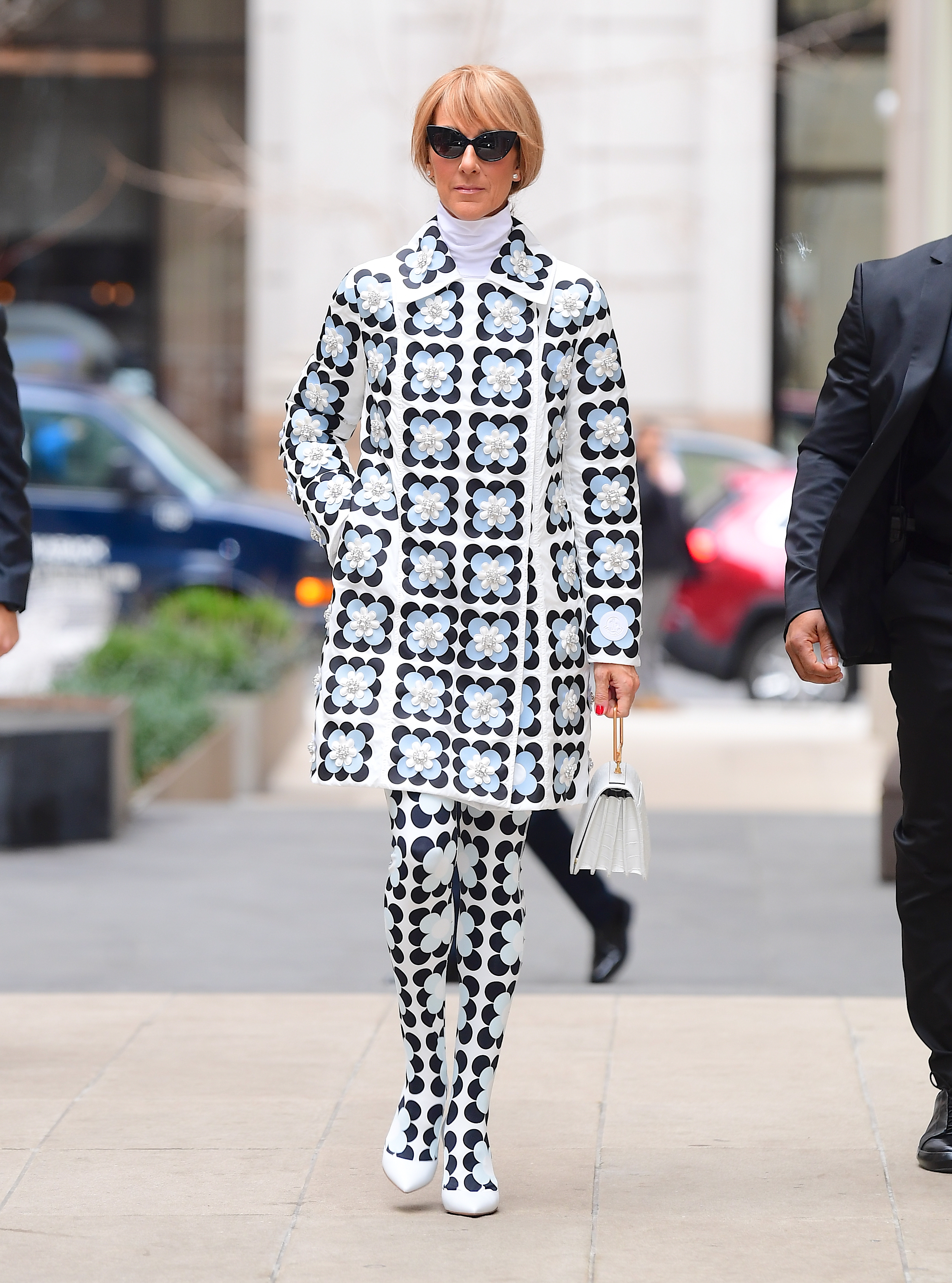 IT’S hardly Liam and Noel Gallagher territory yet. But the on-going feud between Tony Hadley and his former Spandau Ballet bandmates has the potential to rumble on for just as long.

On the Stars Cars Guitars podcast, singer Tony, who quit the group in 2017, mocked them for releasing their 13th compilation album last month.

When asked his thoughts on the collection, called 40 Years: The Greatest Hits, Tony quipped: “I don’t have anything to do with what goes in, comes out or whatever – but not another greatest hits. Please, please.”

Tony also had a pop at the band’s cover of Simon & Garfunkel’s 1965 hit The Boxer, which appeared on the record. He said: “I tell you what, I don’t ever want to hear that again.”

This summer, ex-bandmates Martin and Gary Kemp mocked Tony in their BBC spoof mockumentary and were seen defacing a picture of him.

WHILE the rest of us are stuck in a cold, Covid-locked Blighty, Ciao Adios hitmaker Anne-Marie is living it up in Dubai.

And if her Instagram followers weren’t already feeling green with envy, they surely will be after seeing her snazzy swimsuit. 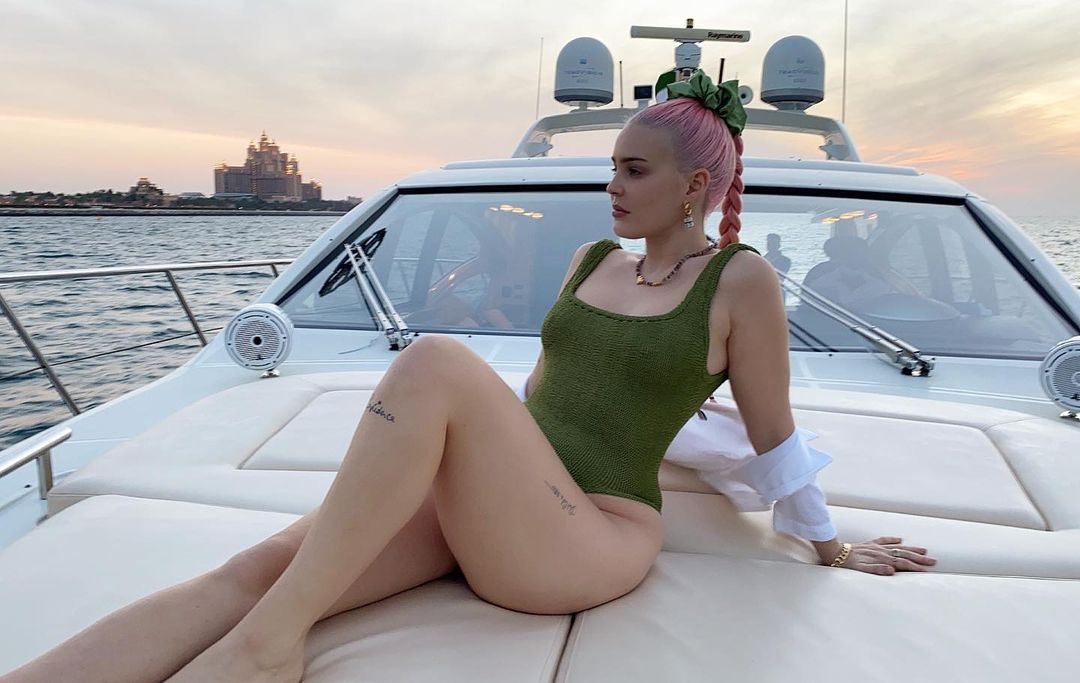 The Birthday singer posed on a yacht in the one-piece along with a matching scrunchie while taking a trip across the waters of the Persian Gulf.

It’s all right for some, isn’t it?

JORDIN Sparks leads a host of stars on a new album released as part of the Global Citizen Prize awards.

The US singer is joined by others including Tori Kelly and Jojo on the eight-song collection Stand Up, which aims to inspire activists around the world.

The record, released by international advocacy organisation Global Citizen, has covers of classic songs such as Come Together by The Beatles and Aretha Franklin's A Natural Woman.

It is available on all major streaming services, including Apple Music, Spotify and Deezer.

The release comes as John Legend tonight hosts the Global Citizen Prize awards ceremony in the US, which honours those helping to make the world a better place.

AFTER causing outrage with his last album by making a joke about the Manchester Arena bombing, you’d think Eminem would steer well clear.

But the rapper has kicked off the controversy again. He makes light of the 2017 attack, which claimed the lives of 22 people, in a surprise new record called Music To Be Murdered By Side B. 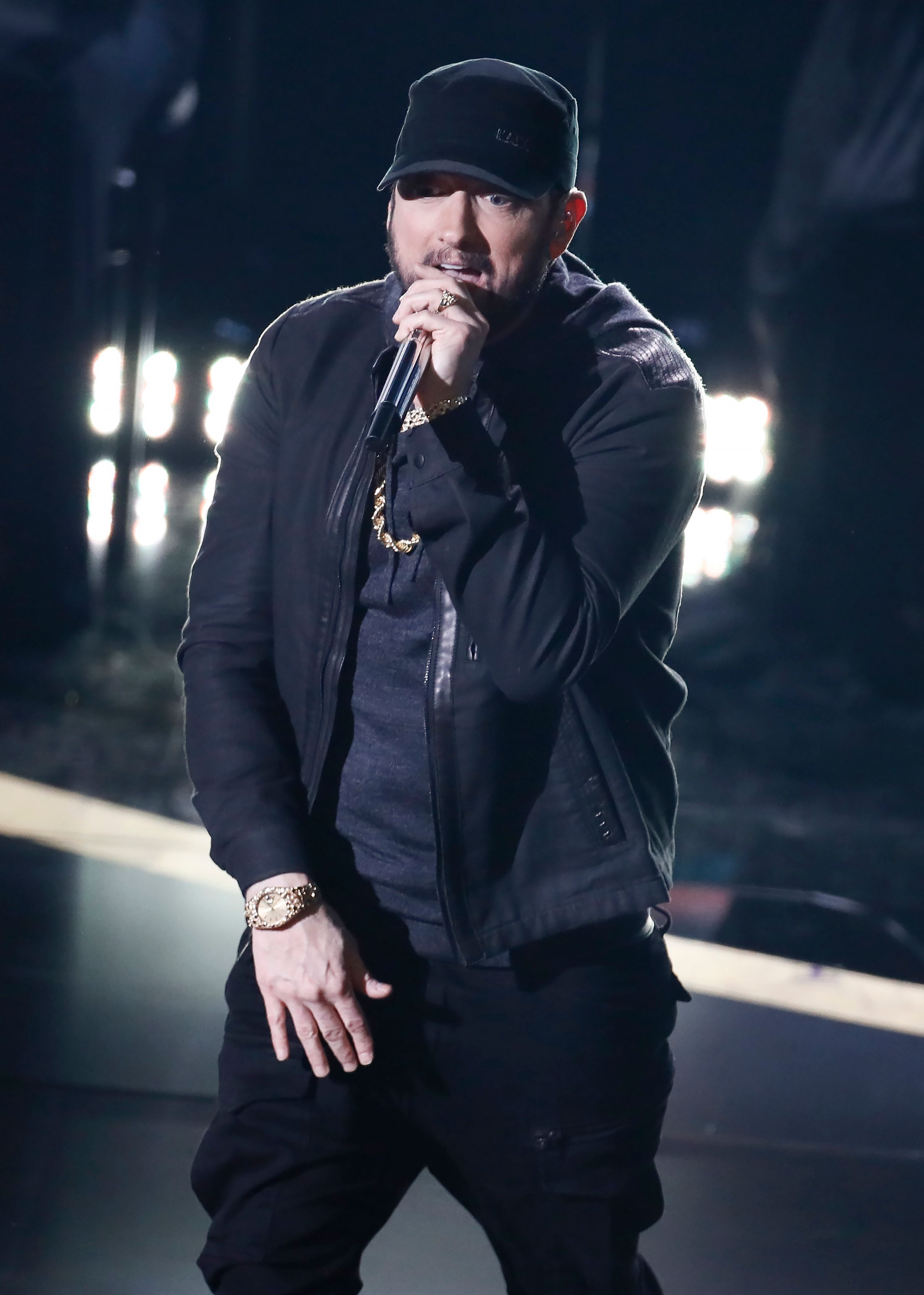 He takes it one step further by also referencing the Boston Marathon tragedy in 2013, when three spectators died.

In Favorite B***h, Eminem sings: “And I know nothing is funny about the Manchester bombing, but we got something in common, both of us are alarming, foul, disgusting, and awful, so repugnant and ugly. I could give the Boston Marathon a run for its money.”

Earlier this year he defended lyrics in Unaccommodating, in which he rapped: “I’m contemplating yelling ‘bombs away’,” in reference to the Ariana Grande concert at the Manchester Arena.

He said certain sections” of his songs were “designed to shock the conscience”. In the new album, an extended version of the one released in January, which surprised the music world yesterday, he takes aim at Billie Eilish who has said she is “terrified” of him.

And I know nothing is funny about the Manchester bombing, but we got something in common, both of us are alarming, foul, disgusting, and awful, so repugnant and ugly. I could give the Boston Marathon a run for its money.

In Alfred’s Theme, he says: “But really I’m just fulfilling my wish of killing rhymes  . . . but I’m really like this, I’m giving nightmares to Billie Eilish.”

He also reignited his favourite feud with ex-girlfriend Mariah Carey by comparing her to an outcast, in These Demons, when he says: “I got a question, what rhymes with Pariah?”

And he hits back at fellow rapper Snoop Dogg – a long-term pal of Em’s mentor Dr Dre – who majorly snubbed him in his list of top ten artists of all time earlier this year. 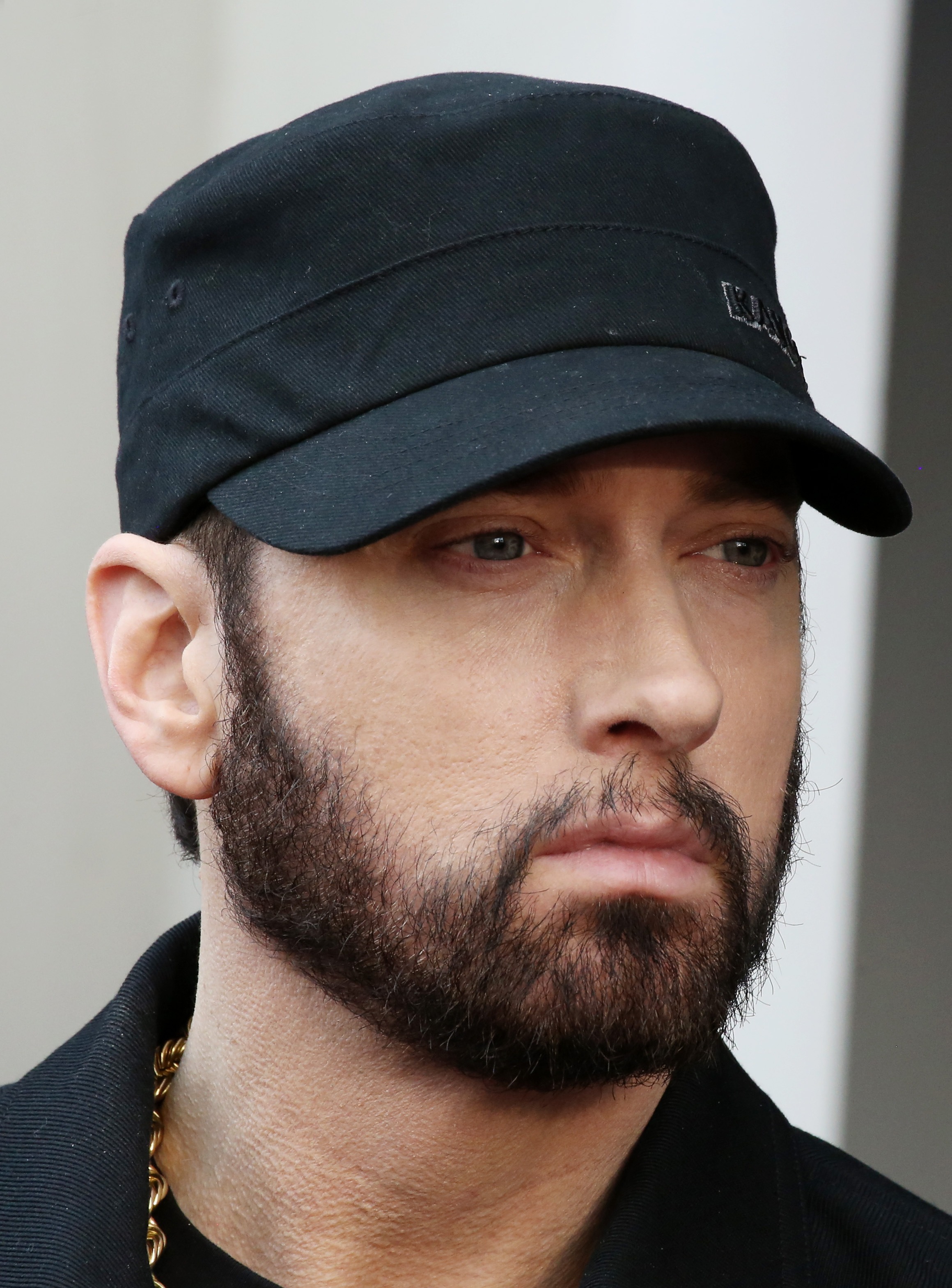 “Man, Dogg, you was like a damn god to me, man not really, I had dog backwards.” There are some worthy targets in Eminem’s punchy songs.

A theme throughout the album is Covid-19, washing his hands while singing Happy Birthday, and there are mentions of disgraced celebs Harvey Weinstein and Bill Cosby.

In Tone Deaf, Eminem, real name Marshall Mathers, sings: “Does Bill Cosby sedate once he treats the cheesecake? You think getting rid of me’s a piece of cake? I’m harder than finding Harvey Weinstein a date.”

However, he does offer “wholehearted apologies” to Rihanna in reference to an alternative version of his song Things Get Worse surfacing on the internet last year, in which he said he sided with Chris Brown over his assault on Rhi in 2009.

In Zeus, he says: “For that song that leaked, I’m sorry, Rhi. It wasn’t meant to cause you grief, regardless, it was wrong of me.”

CAT Deeley will be talking to Phoenix Nights and Car Share comedian Peter Kay in January, as part of BBC Radio 2’s highlights for the New Year.

The station will also be announcing a new listener vote to discover its greatest song from a musical, for Elaine Paige’s regular Sunday lunchtime show.

Gary's all set for Sun gig

ANY fans tuning in to see Gary Barlow’s exclusive free gig on The Sun’s website today are in for a festive treat.

The Take That crooner belts out my favourite Christmas classic to finish the set. 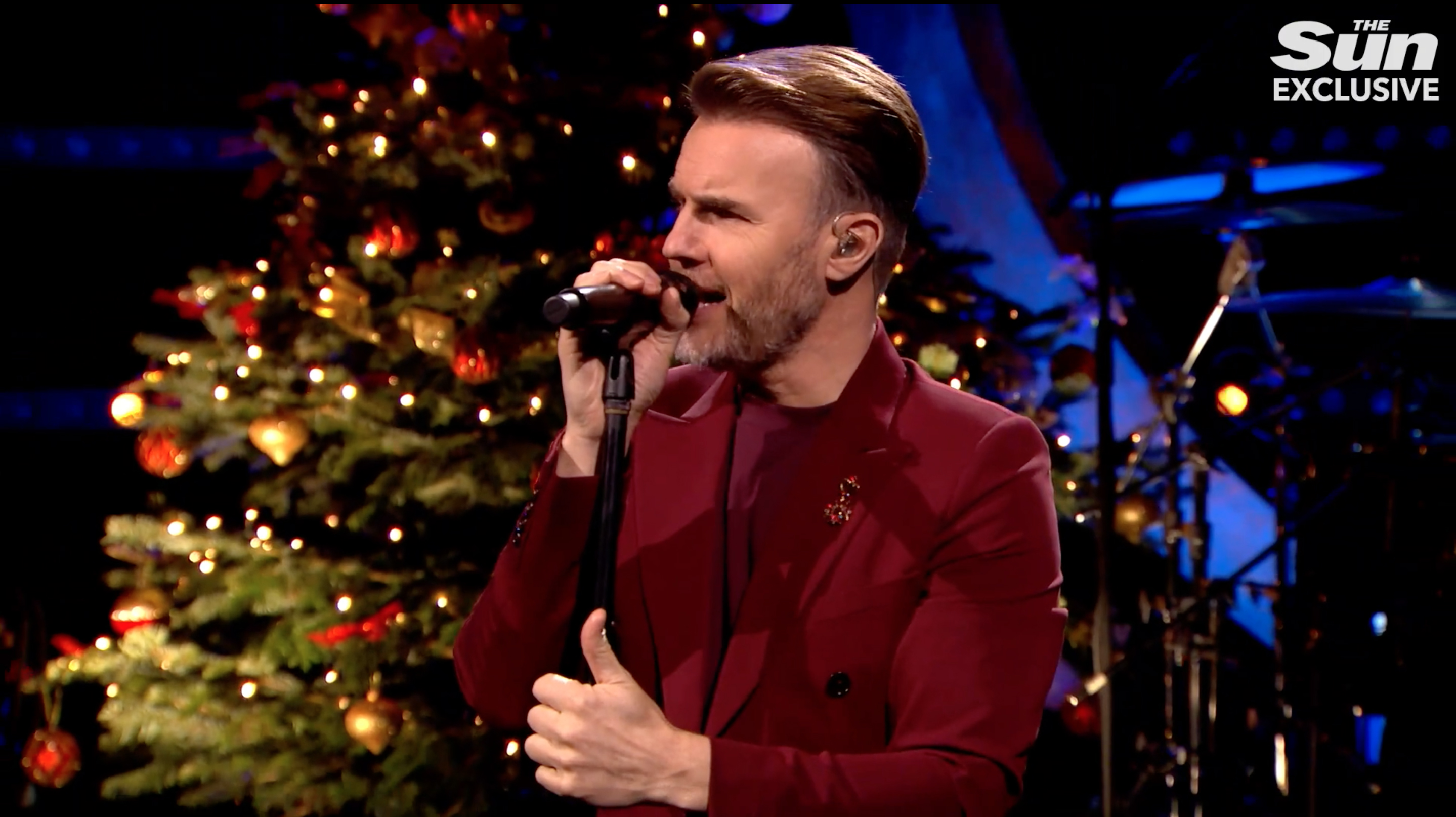 Along with a number of his own solo hits, Gary also brings out some of the man band’s most memorable numbers.

I won’t ruin the setlist for you – but I promise you, it’s well worth tuning in.

Top man, Gary. This is just what we all needed

ED Sheeran’s teased his return to music after more than a year away.

A fan account on Instagram questioned how long his break would be – with one theory that he’ll release music on Christmas Eve.

Another reckoned he’d drop his next album, thought to be called Subtract, in June.

Ed commented on the post: “All very valid questions, but you’ll know at least one answer soon.”

Tags: 2021, booking, Glastonbury, Team
Recent Posts
We and our partners use cookies on this site to improve our service, perform analytics, personalize advertising, measure advertising performance, and remember website preferences.Ok