Actress Ebonee Noel played Special Agent Kristen Chazal in Seasons 1 and 2 of the crime drama series FBI, which premiered on CBS in September 2018.

The speculation that Ebonee Noel was leaving FBI started after the Season 2 midseason finale (Episode 10, titled Ties that Bind) on December 17, 2019, ended with a cliffhanger.

Agent Chazal suffered life-threatening injuries after being stabbed in the neck during a violent confrontation with a killer.

Fans were left in suspense about Chazal’s fate after the episode ended with the FBI agent’s life in grave danger. She was rushed to the hospital, where doctors raced to save her life.

When the show returned after a brief hiatus for Episode 11 in January 2020, fans learned the former FBI Analyst turned Special Agent had undergone successful surgery and survived the nearly fatal throat injury.

Fans want to know whether Ebonee Noel is leaving FBI

Despite Special Agent Kristen Chazal’s recovery and return to the series, speculation that Ebonee Noel was leaving FBI continued after Season 2 ended in March.

“If Ebonee Noel has actually left FBI or has been written out of the show, I don’t know what the reason was but I do know that this beautiful, talented actress deserves all the success she could possibly have in life,” a fan wrote on Twitter. 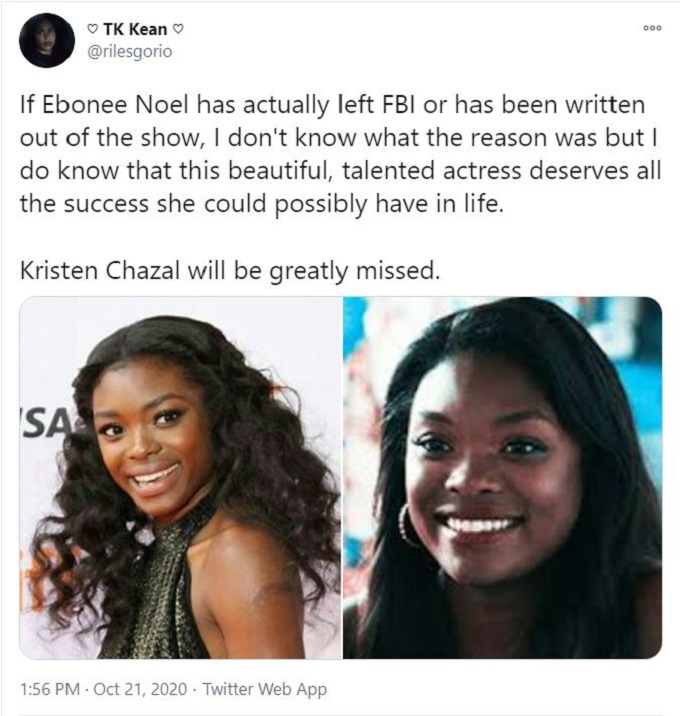 What happened to Kristen on FBI Season 3 premiere?

Speculation that Noel left the series gained traction after FBI Season 3 premiered on CBS on Tuesday, and the actress’s character, Chazal, was not in the episode.

Noel’s absence from the Season 3 premiere convinced fans that she had left the show. Many took to Twitter to say they would miss the actress and were sorry she left the show.

“Same here… but also looking forward to what #KatherineReneeTurner will bring to the table,” another fan responded.

“@EboneeNoel Watching FBI, sorry to see you left the show. Seriously. Your character was a refreshing change to the stereotypes that CBS usually puts out. All the best to your future success,” yet another fan tweeted.

The showrunners have not officially confirmed that Ebonee Noel has left FBI.

Noel’s absence from the Season 3 premiere and the fact her bio was removed from FBI’s official cast page convinced fans she left the show.

Ebonee Noel is of Guyanese ancestry. She also portrayed Special Agent Kristen Chazal in an episode of FBI: Most Wanted.

She is also known for her roles in Still Star-Crossed, Law & Order: Special Victims Unit, and Wrecked.

FBI Season 3 airs on Tuesdays at 9/8c on CBS

Tags: Ebonee, Fa, FBI, is, Leaving, Noel
Recent Posts
We and our partners use cookies on this site to improve our service, perform analytics, personalize advertising, measure advertising performance, and remember website preferences.Ok