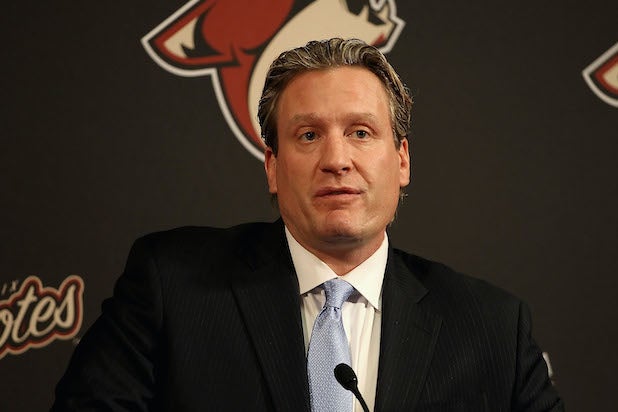 Back in February, Roenick was a guest on a Dec. 19 episode of Barstool Sports’ Spittin’ Chiclets podcast, where he joked about wanting to have a threesome with his wife and Kathryn Tappen, another NBC Sports host. The former NHL star described a day when the three of them were out by the pool while on vacation and were asked by another vacationer about “the situation” between all of them. “I play it off like we’re going to bed together every night, the three of us,” Roenick said. “If it really came to fruition, that would really be good, but it’s never going to happen.”

Roenick apologized for his comments a few weeks later but was suspended and ultimately fired.

In the lawsuit filed in New York on Friday, Roenick says during the 2018 Winter Olympics, he asked NBC Sports executive Sam Flood about “colorful commentary” he heard from analyst Johnny Weir “regarding the body parts of ice skaters.” Roenick says that Flood responded by saying Weir “is gay and can say whatever.”

Roenick also points to a story from earlier this month about a video where Weir and Tara Lipinski (another NBC commentator) used “a vulgar term for a woman’s groin and joked about a sexual affair” when talking about Olympic bronze medalist Bradie Tennell.

“However, to date, there has not been any remedial action taken against Lipinski or Weir,” the lawsuit says.

Roenick says that, ultimately, he was fired “because of his sex and sexual orientation.” He also said that his open support for President Donald Trump in 2017 played a factor in his dismissal.

“We have not seen the complaint, and we have no comment,” an NBC Sports spokesperson told TheWrap.

Pamela Chelin contributed to this story.

Tags: accuses, Jeremy, nbc, OF, Roenick
Recent Posts
We and our partners use cookies on this site to improve our service, perform analytics, personalize advertising, measure advertising performance, and remember website preferences.Ok