Kate, 53, is best known for presenting Good Morning Britain but on Tuesday evening, she sat down with political commentator Iain Dale, 58, for an interviewon LBC about her husband Derek, 53. The father-of-two has recently returned home after spending the past year in hospital, battling the impact coronavirus has had on his body, and the case has hit headlines across the UK as his wife has given countless updates on his health. In the midst of the journalist worrying if her spouse was going to survive, Piers Morgan, 55, urged her to make notes to write a book once the dust had settled. However, the mother-of-two has admitted she didn’t take up his suggestion at first call. 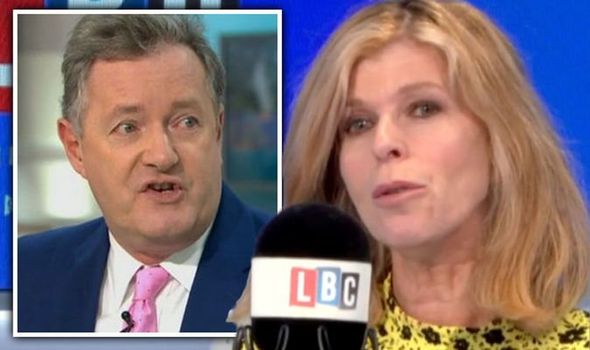 The Power Of Hope will be released later this week and in a discussion about the book, Iain asked his colleague what made her write it.

Kate explained Piers had a big influence at the time when she felt she was “ranting” at everyone as she was ”trying to make sense” of what was going on.

“Piers said, ‘You’ve got to write this down,’” the mother-of-two recalled but stated she ignored his advice as she “didn’t have time to write it all down”.

The outspoken journalist understood his friend’s plight and suggested she “write down words” as she “wouldn’t remember” everything that was happening at the time.

Picking up a pen to paper, Kate eventually began making notes about her husband and his ordeal which have now become the foundations of the book.