The Good Morning Britain star has faced a heartbreaking coronavirus battle of her own as her husband Derek remains in a coma following his battle with COVID-19 earlier this year. Kate has been vocal with how Derek is doing with the likes of Piers and Susanna in recent months, which is why ITV viewers last week were taken aback when actor Dominic West appeared on the show to tell Kate he was “leaping with joy” to hear about Trump’s diagnosis. As Piers brought up Dominic’s comments today, he claimed they were “unacceptable” and turned to Kate for her opinion.

Piers kicked off the GMB discussion as he said: “Forget Trump’s behaviour, forget everything for a moment,

“To say you jump for joy when you hear someone’s got coronavirus and to say it, frankly, when you have a presenter on this show whose husband is still in a coma, I found that unacceptable.”

Kate weighed in, however, taking aim more at Trump the Dominic for his response to the news.

The GMB star began: “I was surprised because I don’t think, I actually don’t think Dominic meant – well, he’s been in touch directly with me to apologoise personally to me,” 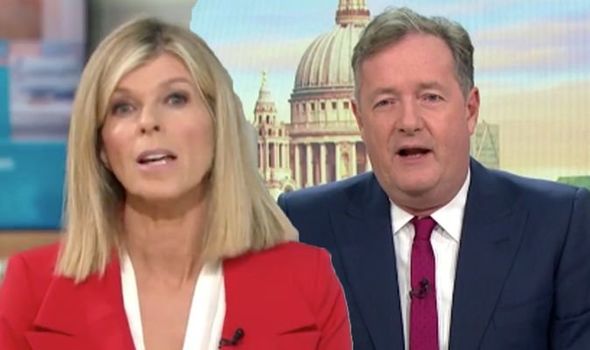 She continued: “He wasn’t aware that Derek had had coronavirus and was worried that I was upset for those reasons,

“I was surprised because I said afterwards I’m sure you join us in wishing him the very best personally, whatever your views are, and I don’t think he meant that [jumping for joy],

“He’s not a Trump supporter and I think it’s a symptom of Donald Trump’s behaviour throughout this pandemic that he continues to thumb his nose at it and he was jumping for joy that he may now feel the effects of it.”

Kate then opened up on how President Trump’s behaviour in her eyes continues to stoke divisions.

“But that plays into the idea that if you get coronavirus and survive then you’re a hero, you’re not, you’re very lucky. The heroes are the people who are treating you and helping you.”

Kate moved onto her personal experience with Derek in a passionate speech, but when Piers tried to jump in, she promptly put an end to his interjection.

“Derek still hasn’t been allowed, even though he’s no longer tested positive for coronavirus, children can’t visit, his mum and dad haven’t seen him,

“And I personally believe that actually having them in room could possibily be of great benefit,

“There are children that have died when their mum and dads haven’t been able to see them so why does he think it’s more important for him -” Kate said before Piers tried to jump in.

“Just let me finish,” a passionate Kate said as she continued to get her point across.

Kate went on to slam Trump’s decision to leave the hospital in his car to wave to fans outside while still recovering from COVID.

Those watching at home were left rather divided by the debate, as one said on Twitter: “Just wish Piers had let Kate speak without interrupting her several times.”

“It’s all a stunt with Trump which is absolutely disgusting with what some partners and children of loved ones are going thru!” said a second. (sic)

While a third tweeted: “Well done Kate garroway for staying calm. Must be so hard when you nearly lost your husband. You were fantastic.”

Good Morning Britain continues weekdays at 6am on ITV.