Khloe Kardashian and Tristan Thompson split rumors have heated up again, as the KUWTK star has unfollowed her ex on social media.

In addition, the 36-year-old reality TV star may have posted a few messages aimed at Tristan, who is also the father to her two-year-old daughter, True.

The latest social media happenings arrive shortly after a podcast interview featuring the Kardashians’ former friend, Larsa Pippen, who commented about previously dating Tristan, among other topics aimed at the family.

It’s been an off-and-on sort of relationship between Khloe and Tristan for years. As of now, it appears that despite the couple being back together for several months in 2020, they may have split apart.

The first clue might be that Khloe officially unfollowed Tristan on social media. In addition, she added a few messages recently to her Instagram Story.

“Be strong, but not rude. Be kind, but not weak. Be humble, but not timid. Be proud, but not arrogant,” one message on Khloe’s Story said.

She posted a separate “Tip for Sanity”  on her IG Story. It said, “You do not need to explain yourself to everyone. Learn to distinguish between who deserves an answer and who doesn’t. Your time isn’t always worth it.” 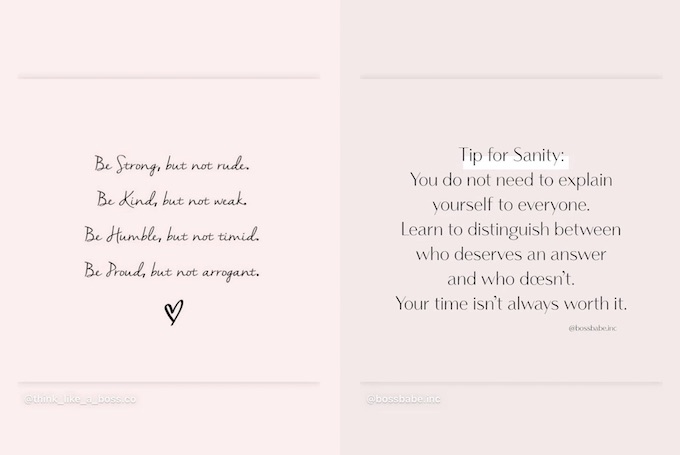 In addition to the above IG Story messages, Khloe shared another one on her Instagram page.

“A happy soul is the best shield for a cruel world,” Khloe posted (below), which is a poetic quote from Atticus.

He’s a Canadian poet who has remained anonymous but attained celebrity status through his IG posts and several bestselling books. 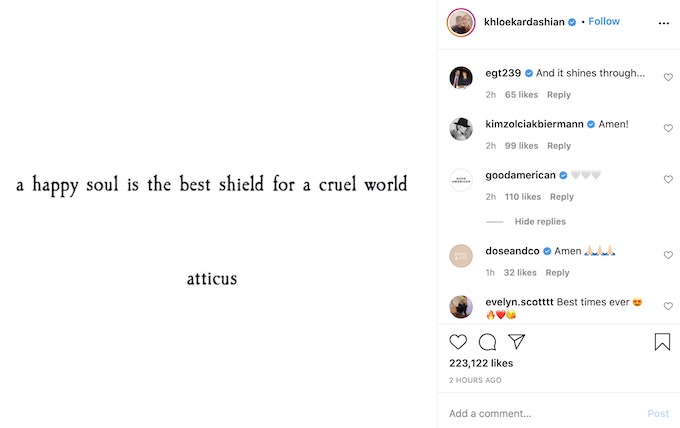 It brought out mostly supportive comments, but one commenter wrote, “Here we fkn go with the ‘sub’ quote memes.”

That brought a reply comment from someone who said, “awhh Tristan on the run again” with crying-laughing emojis.

In recent weeks, Khloe posted group Halloween costume photos on her Instagram with her and Tristan dressed as Cleopatra and Marc Antony. They also had their daughter True dressed up as part of the photos.

The couple was also featured on a recent Keeping Up With the Kardashians episode involving Khloe’s battle with COVID-19. During that episode, Khloe admitted that she was grateful to have Tristan’s assistance (as a friend) to help with True and through Khloe’s battle with coronavirus.

In a more recent episode (see KUTWK Katch-Up below), Khloe told Tristan during a heart-to-heart convo, “We’ve done this rodeo before,” as she makes a decision about them being together.

She told Tristan she sees he’s changed and wonders out loud, “Why now? Why couldn’t you be that man I dreamed of when we were together?”

Tristan revealed he wants Khloe in his life, while she tells him she’s moving slowly to “take down little bricks” and become more trusting.

That particular conversation was recorded months ago for KUWTK. However, this past August, it was reported by ET and other sources that she and the NBA star had patched things up and were back together again.

However, last week also came the arrival of the Hollywood Raw Podcast interview featuring Larsa Pippen. The 46-year-old, who was once married to NBA great Scottie Pippen, talked about previously dating Tristan Thompson. Larsa said she introduced him to the Kardashians, who were her friends at the time.

She indicated that Tristan left her shortly after that introduction as he began dating Khloe Kardashian “a week or 10 days later.” Larsa basically denied dating Tristan behind Khloe’s back and said she didn’t go after him when he was with Khloe.

It’s well-known that the Kardashians unfollowed Larsa Pippen months ago on social media, as it appeared their friendship had run its course.

During her podcast interview last week, Larsa suggested that Kim Kardashian’s husband Kanye West had “brainwashed” them against her. This was due to Kanye not trusting anyone and maybe “feeling threatened” by Larsa’s close relationship with his wife.

As far as things go with Khloe Kardashian and Tristan Thompson, it’s definitely looking like something broke down in the relationship-mending for the former couple.

Keeping Up With the Kardashians airs Thursdays at 8/7c on E!