As the COVID-19 pandemic spread across the globe, Emmy-nominated actress Betty Gilpin returned to her childhood home in Connecticut, opting to ride out uncertain times with her parents and two younger brothers. She even slept in a bedroom that she said was “frozen in time,” complete with Destiny’s Child posters on the walls.

It’s an image that invites rapport: In the most difficult circumstances, a veteran actress returns to the warmth of her childhood home to snooze under vintage pictures of Beyonce. Other parts of Gilpin’s life, however, seem unreal.

Back in September 2019, Gilpin readied for the release of Craig Zobel’s “The Hunt.” It marked her first big-screen leading role, but outcry from no less than then-President Donald Trump led to the film’s cancellation. The film was eventually released in theaters in March 2020 — days before the country (and its movie theaters) began to shut down. Then Netflix canceled her beloved series “GLOW” before it could finish a planned fourth season. In January 2021, Amazon picked up Gilpin’s other planned blockbuster film, Chris McKay’s $200 million Paramount feature “The Tomorrow War,” opting to release it direct to streaming and forego a long-planned July 2021 theatrical release.

Gilpin’s career might look different had “The Tomorrow War” or “The Hunt” come out as planned, or if “GLOW” got its promised final season — but all of that would demand no pandemic, no political hysterics, no truncated theatrical releases, no streaming homes. Gilpin regards all of it with a measured sense of perspective.

“I think if all of these twists and turns, career-wise, had happened to me when I was 19, I would have gone to the sadness hospital,” Gilpin said in a recent interview with IndieWire. “But at 34, after spending over a decade of my career doing basically just off-Broadway and a ‘Law & Order’ every three years, having a movie come out, even for just two days, and then a movie come out on Amazon, it’s certainly way farther than I ever thought I would be.” 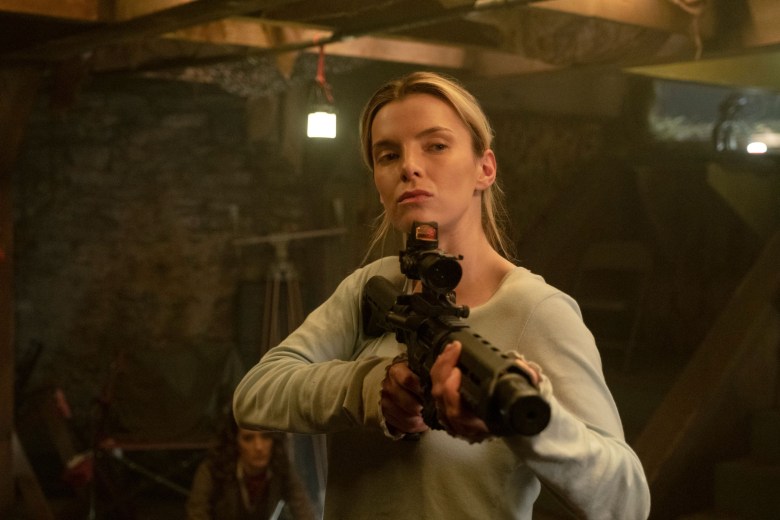 There’s also an upside to all of this delayed gratifcation; she says she’s never been happier with her work. “I was really surprised that most of the roadblocks in my career and in my life and in my physical body had more to do with my own brain than the outside world,” Gilpin said. “I think the shame calls were coming from inside the brain house. Once I both aged out of it and just got honestly too tired to hate myself as much, then doors opened for me creatively.”

Another revelation: Gilpin suspects she may not be cut out for megawatt celebrity. “I’m probably not a good fit for being super-famous,” she said. “I’m too neurotic. So I’m not like, ‘When am I going to get mine?’ I’m enjoying flying under the radar being Windows ’94 Jodie Comer. … Math-wise, you have to have a lotion contract and a gazillion followers to be the lead of something, and I’m too neurotic for social media and my skin is too dry for lotion contracts.”

“The Tomorrow War” offers crazy, alien-fighting action, but it also packs a timely punch that’s closer to Gilpin’s heart with its plot points around climate change and the need for people to act in their best interest ASAP. “I would so much rather be zeitgeist-y than [like], ‘Now, More Than Ever, Hotel for Dogs’! It feels like an honor to do something that points a finger at what’s going on right now,” she said. “I’ll tell you, I’ve done versions of ‘Now, More Than Ever, Hotel for Dogs,’ and it’s pretty soul-sucking.”

While most of the film’s action follows Chris Pratt’s character in the midst of gratuitous alien warfare, the actress still found real dimension as his wife Emmy, a therapist who keenly understands the cost of war. Even in a seemingly smaller role, Gilpin thinks deeply, both about what she’s putting on the screen and how it reflects the world beyond it.

“We’re so focused on who we’re going to be tomorrow or in a month or a year and less focused on what we can do today,” Gilpin said. “As a citizen of the world, you’re like, ‘I’ll make those changes tomorrow. I can’t do it right now. I know that I need to address these demons inside and that the glaciers are melting, I’m going to address it tomorrow.’ And then something happens where you get a wake-up call, like when we were all told suddenly, ‘Don’t go to the grocery store for a year and a half. Don’t see your family for a year and a half.’ It’s this sudden pencils-down who-are-you moment that you weren’t expecting.”

As the country starts to reopen, Gilpin is trying to appreciate the unexpected. That includes movie-star additives like “getting Kardashian war paint” on her face for on-camera interviews and chatting about an alien-centric action movie with a bunch of talking heads on Zoom. But the bigger, headier things still prove more satisfying.

“The lessons that I’m learning are that I’m accessing more of the internal, craggy old witch with superpowers, [who] has nothing to do with the Barbie stuff,” she said. “So that when the Barbie stuff goes away, which it will any moment now, I think I’ll probably age into the best stuff, even if the camera’s not filming it.”

Gilpin often references her parents, fellow actors whose affection for theater work has always guided Gilpin’s career. Her mother, Ann McDonough, best known for a long-running role on “All My Children,” is “such an incredible actor,” Gilpin beamed. “She is such a Lucille Ball, played-to-the-mezzanine comedian character actress, and really raised me to be a character actress, which is the greatest gift.”

Her father, Jack Gilpin, pops up in all manner of productions, from “Billions” to Broadway, and will next be seen in HBO Max’s lavish series “The Gilded Age.” Back in 1988, he had a small role in the 1988 Chevy Chase vehicle “Funny Farm” — a film that I count as an unlikely favorite for its sendup of a small Vermont town similar to the one of my childhood. Gilpin lit up at the reference: “I was there! At like two years old, I was on set!” Her parents’ theatrical sensibility appears to be Gilpin’s North Star, even when her own experiences are a world away.

“There’s no ‘your coverage, my coverage’ in theater,” she said. “It’s all about the space in between you and your scene partner, and the unexpected and the grotesque and the between. As I got a little more successful, it was a shock to me that a lot of being an actor can also involve my coverage and my angles and my self-promotion. It seems so the opposite of what my parents taught me what being an actor was, that it was such an ensemble-based thing, almost celebrating the ugly of life instead of a self-based filtered experience.”

Gilpin seems happiest in the “ensemble-based thing,” including “GLOW,” which brought her three Emmy nominations. Last October, the streamer pulled the plug on a planned fourth season, owing to how “especially challenging” it would be to shoot “a physically intimate show with [a] large ensemble cast” under COVID safety guidelines. Gilpin, like her castmates and the show’s fanbase, was heartbroken by the cancellation, but she won’t give up hope for more. 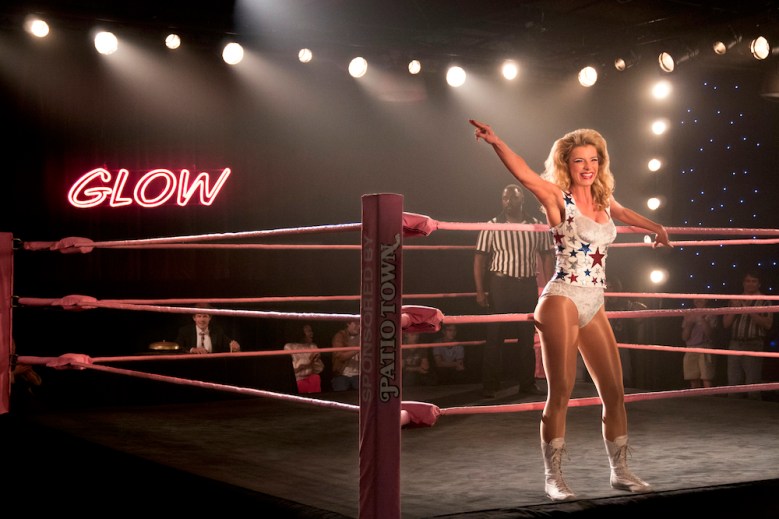 “My pitch is that we do it in 20 years and we have a ‘Mare of Easttown’-esque season four, or ‘Golden Girls’-esque,” Gilpin said with a laugh. Some of season four was already shot before the show was officially shut down, and based on Gilpin’s  description it set up some fascinating new directions for the Gorgeous Ladies of Wrestling. So, what happened to her Debbie Eagan?

“Can you spoil something that’s never going to come out? Will it come out?” she said. “I think that, without spoiling, Debbie continues on a career path maybe to a detriment, focuses on that, and suddenly wakes up and realizes her personal life is not what she wants it to be. Can you have it all? Probably not.”

Meanwhile, Gilpin is working hard to have a lot. In late March, she signed a deal with Flatiron Books to pen an essay collection. Her side gig as a writer is no secret; her byline has appeared in The New York Times, Vanity Fair, The Hollywood Reporter, and in 2017, she wrote a well-regarded (and funny and honest and true) essay for Glamour about self-confidence and body image. (Perfect headline: “What It’s Like to Have Pea-Sized Confidence With Watermelon-Sized Boobs.”) Gilpin’s book is scheduled for next spring, but a question about its status sets off a small panic.

“Oh, God, I don’t know when it’s coming out! I have to finish it,” she said. “It’s almost done. Oh, God. Oh, God. Writing has always been my secret thing that I was too ashamed to press ‘send’ on. It’s like when I was a big stoner, I never learned how to roll a joint because it’s like, why not let the best joint roller in the room roll the joint? I felt that about writing. I like writing, but I’m not Joan Didion, so probably I should never write a sentence.”

She got over it. “I think in every profession, you realize a lot of people are really comfortable with their mediocrity, so maybe I should try to find a way to be comfortable with mine because the world is ending,” she said. “We all have to press ‘send’ on our manifestos.”