Naga, 45, was sat alongside BBC Breakfast co-star Dan Walker, 43, at the time and they were reporting on President Donald Trump’s, 74, comments on Twitter whereby he insinuated four congresswomen of colour “go back” to “places from which they came”. After voicing her opinions on the racism row which had erupted, the BBC’s Executive Complaints Unit said the journalist had “breached editorial guidelines”. The decision was overturned months later and since then, the presenter has spoken out on the controversy several times. In her latest admission about the media storm which she found herself at the centre of, the broadcaster said she was left “distressed” by the attention the story received.

The broadcast which aired on July 17, 2019, Munchetty said: “I’m not accusing anyone of anything here, but you know what certain phrases mean.

“I can imagine lots of people in this country will be feeling absolutely furious that a man in that position feels it’s okay to skirt the lines with using language like that.”

The journalist received support from many of her colleagues and members of the public who supported the notion she should have a voice on the matter.

Walker has previously explained he and his co-stars didn’t mention the controversy on-air as Munchetty “didn’t want any more attention.”

Almost a year after the racism row made the headlines, the journalist has said she “absolutely hated” being in the spotlight. 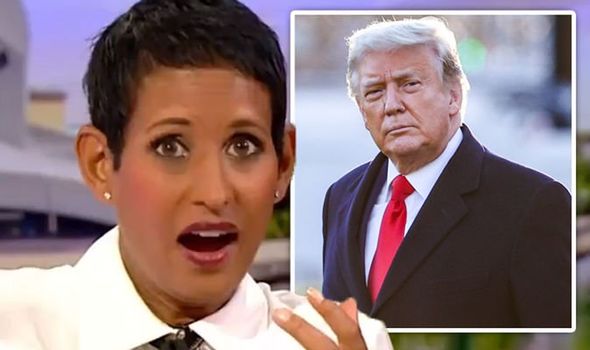 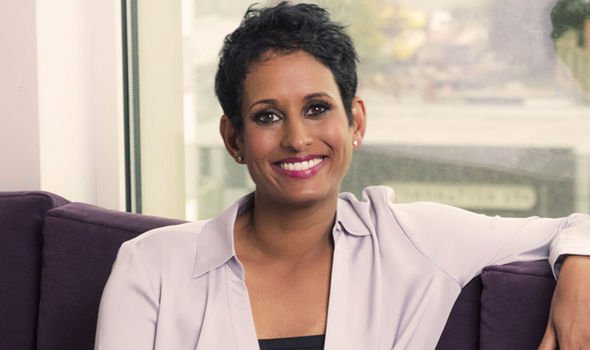 “We are not the story, we are facilitators. It’s not what I’m interested in. I found it very distressing, to be completely honest,” Munchetty explained.

Following former Director-General Tony-Hall, 69, overturning the broadcasting giant’s decision to reprimand the presenter, she told Radio Times she does not regret making the comments about President Trump.

With a backlash at the time regarding the host’s comments, the BBC said: “President Trump’s comments that a number of female Democrat members of Congress should ‘go back’ to the ‘totally broken and crime-infested places from which they came’ were widely condemned as racist, and we reported on this extensively.

“The BBC’s editorial guidelines do require due impartiality, but the Editorial Complaints Unit’s ruling is clear that Naga Munchetty was perfectly entitled to give a personal response to the phrase ‘go back to your own country’.” 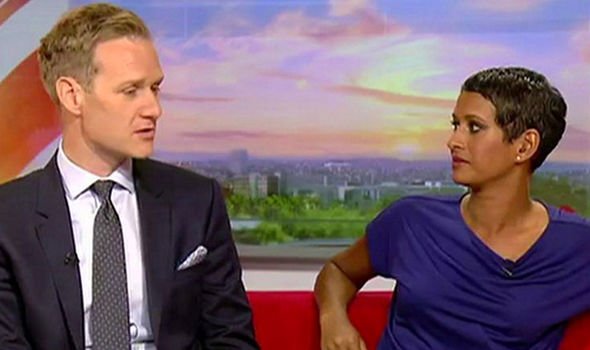 The statement continued with the broadcasting giant acknowledging they understood the presenter’s “strong” stance on the matter.

They also stipulated there was “nothing wrong” with the journalist talking about “her own experiences of racism”.

However, the network explained the lines were blurred when the stars of the show discuss their opinions on the “individual making the remarks”, which in this case was President Trump.

“It was for this reason that the complaint was partially upheld. Those judgements are for the audience to make,” they added.

In a rare act of solidarity with his breakfast news rivals, Good Morning Britain star Piers Morgan, 55, stood with Munchetty on the matter.

Taking to Twitter in view of his 7.7 million followers in September 2019, the Life Stories presenter wrote: “Since the BBC will gag my breakfast show rival @BBCNaga from saying anything about this, allow me: it’s b****y ridiculous.

“Her words were powerful and necessary. Shameful censorship,” he added and it seems the BBC journalist appreciated his support.

Speaking earlier this year, the broadcaster commended the ITV news team, including Morgan and his co-host Susanna Reid, 50.

“I think competition is a great thing. I have immense respect for Susanna Reid and Piers Morgan,” Munchetty said.

On the ferocious ratings battle between the two programmes, she added: “How much attention do I pay to it?

“If you are on Twitter, or you read the papers, there is usually a story or something generated from Good Morning Britain.

“Noise, and an alternative, is a good thing,” she told The Guardian.