With Alex Jones self-isolating at home, Ronan and Angela have been stepping in to give BBC viewers their regular daily dose of The One Show. The pair have proved a popular appointment with viewers thanks to their onscreen chemistry and cheeky back and forths. And it continued this evening when Ronan jokingly blanked his co-star when she asked him about any secret tattoos.

The show kicked off as Angela and Ronan shared with viewers what was on the way – from a chat with chart-topper Sam Smith to Strictly Come Dancing’s JJ Chalmers.

But when they revealed Autumnwatch’s Michaela Strachan would also be on the programme with a segment on seal pups, Ronan had a revelation for his co-host.

“Stop it,” Angela exclaimed before asking her co-host: “Do you have it tattooed anywhere?” 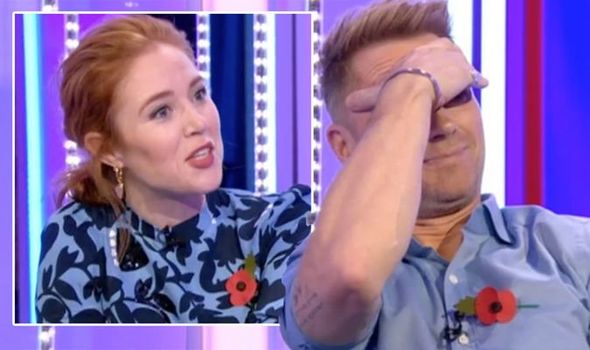 Silence quickly descended on the studio as Ronan refused to answer Angela’s line of questioning.

“Anyway, moving swiftly along,” the Boyzone singer said as he moved on with proceedings.

Angela was left open-mouthed by the surprise reaction from the singer, before quipping: “He’s blushing!”