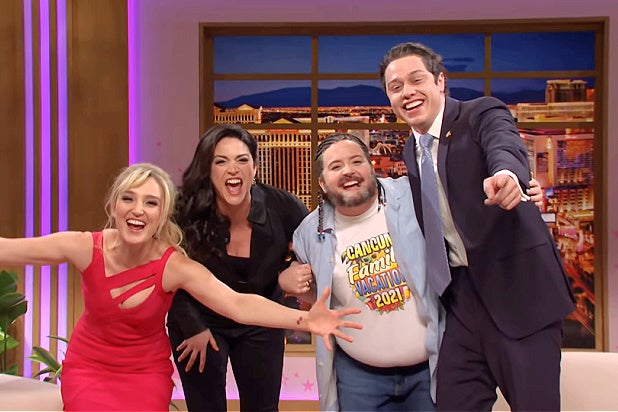 “SNL” is back, now deep into its 46th season. The most recent new episode, which aired on Feb. 27, was hosted by Nick Jonas, who also acted as the musical guest. The cold open sketch saw cast member Aidy Bryant once again dress up as Ted Cruz for a game show in which contestants win the COVID-19 vaccine.

Since Donald Trump lost the election and is now all the way out of office, Alec Baldwin very well might be done playing Trump. He hasn’t appeared since the episode immediately after the election in November — he held up a little “Thank you” sign at the end of it.

But with Trump’s impeachment trial over — and once again making some TV appearances and speeches — it seems like it’s certainly possible he could pop back up on “SNL” at some point.

This week, on Saturday, March 20, there WILL NOT be a new episode of “SNL.” After five straight new episodes in January and February, “SNL” is on break — it’ll return on March 27, when former cast member Maya Rudolph will host, likely with her Kamala Harris impression in tow.

As is usually the case on off-weeks, NBC will air two “SNL” re-runs on Saturday. First, at 1o p.m. on both the east and west coasts, will be a re-air of the season 32 episode that was hosted Julia Louis-Dreyfus.

Then at 11:30 in the normal show slot, we’ll get a re-run of an episode from this current season: the episode was hosted by Dan Levy, with Phoebe Bridgers as the musical guest.

You can be pretty sure this season of “SNL” be very political for the full stretch. While it’s not an election year anymore, somehow the tense political situation in the U.S. managed to ramp up from the fever pitch early in 2021, thanks to the mob of terrorists who invaded the U.S. Capitol on Jan. 6. “SNL” will, as it always does, follow the discourse.

And, well, it’s tough to pass up having Aidy Bryant play Ted Cruz as often as possible, which the show keeps doing.

Perhaps the biggest splash of season 46 was the addition of Jim Carrey as the show’s resident celebrity Joe Biden during the election cycle. But Carrey dropped out of the role after Trump lost, and “SNL” revealed its new Biden just before the holiday hiatus: cast member Alex Moffat. Moffat has not made any appearances as Biden since — no one has — so it’s not clear if they’ll stick with him.

The premiere episode came out hard with political commentary, with the debate cold open, a very political monologue from Chris Rock, and a stunned discussion of Trump’s COVID-19 infection from Michael Che on Weekend Update.

And “SNL” hasn’t slowed down with its political content, with each cold open in season 46 being about the election, its aftermath or, as we saw in the last episode, the COVID-19 vaccine. After that debate sketch in the premiere, we got two other debate sketches, one for the VP candidates and one other for the presidential candidates, as well as one about the dueling town halls from when Trump was infected with COVID-19 and refused to submit to safety measures.

The show’s writers were obviously pleased with the election results as well — the cold open sketch in the episode after Election Day was certainly celebratory. That sketch also parodied the episode after the 2016 election in which Kate McKinnon took the stage as Hillary Clinton and played piano while singing “Hallelujah” — this time, Baldwin, as Trump, performed a mournful version of “Macho Man.”

Tags: a, is, Ne, SNL, There
Recent Posts