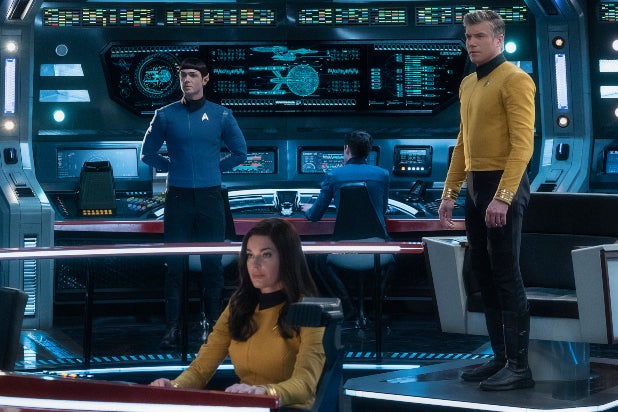 “Star Trek: Strange New Worlds” is beaming up five more to its cast.

Babs Olusanmokun, Christina Chong, Celia Rose Gooding, Jess Bush and Melissa Navia have joined stars Ethan Peck, Anson Mount and Rebecca Romjin on the Paramount+ series, which started production on Friday. You can a video announcement of that here.

The series follows Spock (Peck), Captain Pike (Mount) and Number One (Romjin), all of which were introduced in Season 2 of “Star Trek: Discovery.” “Strange New Worlds” will follow the three in the decade before Captain Kirk boarded the U.S.S. Enterprise, as they explore new worlds around the galaxy.

The “Short Treks” episode “Q&A” detailed the trio’s first day on the Enterprise.

There were no further details on who the five new castmembers would be playing.

Akiva Goldsman and Henry Alonso Meyers will serve as co-showrunners. Goldsman will direct the first episode. Olusanmokun’s television credits include Netflix’s “Black Mirror,” Marvel’s “The Defenders,” HBO’s “The Night Of” and History’s 2016 remake of the miniseries “Roots.” His film credits include the upcoming “Dune” and “Wrath of Man.”

Chong can currently be seen in the live-action adaption of “Tom and Jerry” and in The CW’s “Bulletproof.” Gooding starred as Frankie Healy in “Jagged Little Pill,” a musical inspired by Alanis Morissette’s award-winning album, until the Broadway shutdown in 2021, and received a 2020 Tony Award nomination for Best Featured Actress in a Musical for her work.

Bush starred as Helen in the indie feature “Skinford” and appeared in the recurring guest role of Kendall in the Channel 10 series “Playing for Keeps.”

Navia’s recent television credits include a recurring role on AMC’s “Dietland” and guest roles on Showtime’s “Billions” and “Homeland.” In March 2020, she made her Off-Broadway debut in the much-applauded “Bundle of Sticks” at INTAR Theatre.

“Strange New Worlds” will be the streaming service’s third live-action “Star Trek” series, along with “Star Trek: Picard.” It will also be the second spin-off from “Discovery,” joining the Michelle Yeoh-led series based on Starfleet intelligence agency Section 31, which is still in development.