ITV’s The Chase returned for its first instalment of the week with Bradley Walsh at the helm once more. The four players were up against Mark ‘The Beast’ Labbett tonight in the hopes of taking away a large sum of money. However, player Louise was soon defended by Bradley as she faced Mark at the podium after he made a dig about her “walking” away from the show empty-handed, with the host dubbing the comment “unnecessary.”

Today’s team got off to a good start, with the first two players making it through after some big cash-builder scores.

Player three Louise was up to try and continue the team’s winning streak after a decent quickfire round.

Louise told Bradley she wanted to use her money to go to Australia to marry her fiancé who is from the nation. 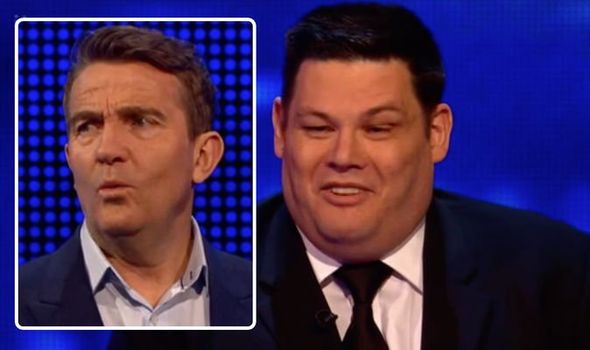 Before the head-to-head began, Mark delivered a line to try and faze the contestant.

He told the player: “Little baby Sadie must be walking by now.

However, Bradley soon stepped in and reprimanded The Chaser over the comment, saying: “Unnecessary!”