Sir Tom Jones, 80, and Olly, 36, were once again on hand to oversee another edition of The Voice UK blind auditions. Newcomer to the ITV singing competition Anne-Marie Nicholson, 29, and will.i.am, 45, were also on hand to judge the contestants but in-between the auditions, the pair started talking about the panel’s different accents. As the music legend gave his take on his co-star’s regional tones, the former X Factor finalist didn’t seem too impressed with his fellow judge’s comments. 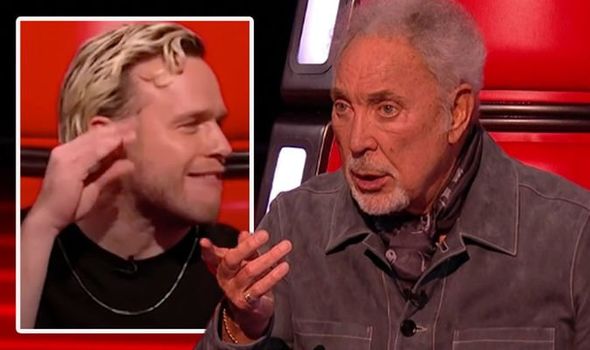 As will.i.am tried his best to impersonate the chart-topper, Anne-Marie said: “Olly’s accent is my accent.”

Sir Tom stepped in as he told the newcomer: “You have a nicer tone to your voice,” to which she laughed comically.

Shocked by the comments, Olly then mimicked an older gentleman’s voice as he jokingly clashed with the music legend.

Explaining himself, the singing veteran added: “Almost like an Essex countryside [accent].”

Responding to the remarks, Anne-Marie told the former X Factor star: “Do you know what? You’d be good singing country.”

Olly then gave his put on a stronger Essex accent as he sang a made-up song with some Country-style tones.