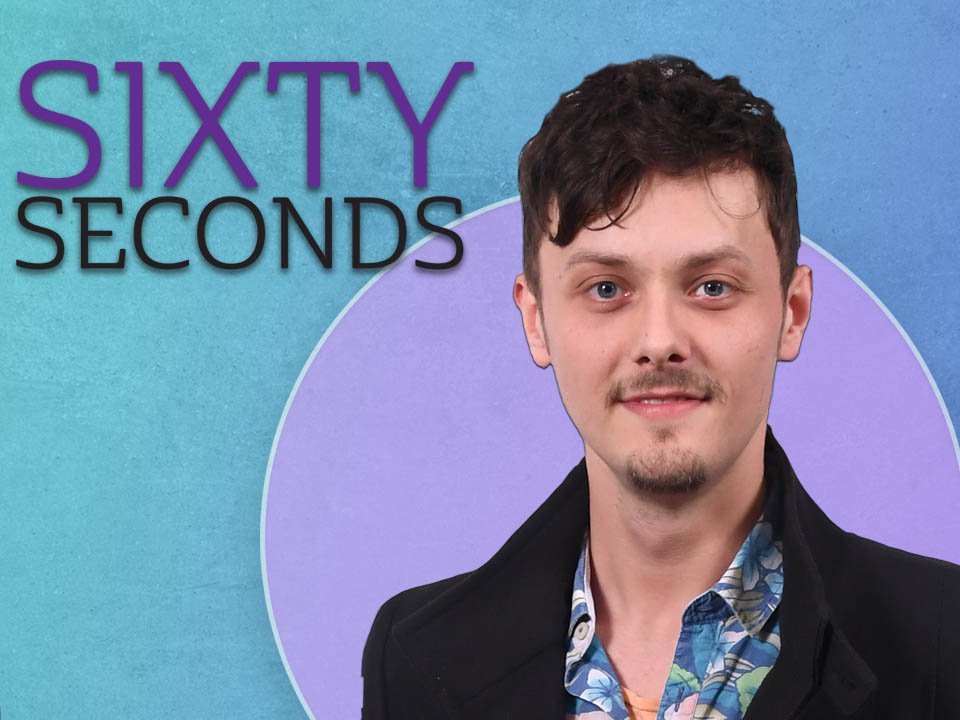 The actor, 25, on Outnumbered reunions, his porn-star parents and why he really should’ve dodged Celebs Go Dating.

You’re starring as Danny in a new play called Rocky Road. It all seems very dark…

It is pretty dark. It’s a fun script to play as an actor but it’s not really a fun story. It’s a two-hander: the characters Danny and Zoe [Kirsten Foster] have both lived extraordinary lives but they’re very deeply intertwined and it’s about Zoe’s journey to find the meaning of that.

It’s all about finding meaning, self-acceptance, loss, shame, fear and redemption – all bundled up into one 80-minute piece.

What is it like performing in the theatre without a live audience?

It feels exciting to be stepping into this new form of theatre where it’s all in front of the camera. It’s a bit of a mesh between a live TV show and a theatre performance.

Theatre is something people might have forgotten about but if we can showcase the talent we’ve got, it will be OK. It is one of the most ancient forms of acting, after all.

You grew up on screen doing Outnumbered – was that a lot of pressure as a teen?

It was, in that I felt I couldn’t openly do some of the things normal teens do.

There was a little bit of fear that I’d get caught doing something like drinking a beer and it would end up as a story, whereas if a normal 15-year-old had done it, it wouldn’t be a problem.

Do you still keep in touch with Outnumbered co-stars Daniel Roche and Ramona Marquez?

Yeah, definitely! We don’t live in each other’s pockets but before Covid we would generally meet up a couple of times a year for a barbecue and catch up.

Because we were kids when we did the show, our parents would chaperone us to work every day, so our families are just as close to each other as we are.

I have no doubt that Daniel and Ramona will be my friends for the rest of my
life – they’re the closest things to a brother and sister I’ll ever have.

Any more Outnumbered reunions on the cards? A lockdown-themed episode?

The key word there is episode! I don’t think that’s off the cards. I don’t want to say the Brockmans were one of the nation’s favourite TV families but there are a lot of fans out there who would like to see more.

I don’t think there will be another series but it’s not impossible that we may see another special.

What was it like moving back in with your mum over lockdown?

I saw my mum a lot anyway but when Covid kicked off she was on her own and I decided to bubble up and help her out. It was great because I didn’t have to worry about my own dinners anymore and suddenly my washing was being done for me.

There have been people throughout this pandemic who haven’t seen their families or have even lost their parents so I feel tremendously lucky to have spent this time with her.

I see them as my best friends and deepest confidantes as well as my parents, and part of the reason for that was that it was explained to me euphemistically throughout my upbringing what was going on.

It wasn’t like they sat me down one day when I was 14 and said, ‘By the way, this house and the school you go to and this car – this is how it was all paid for.’ It was much more gradual than that, so it was normal to me.

Did you pick up any new lockdown skills? Maybe improved on your cooking since Celebrity MasterChef?

I have been doing a fair bit of cooking. I’m not sure I’ve got a great deal better but everything’s been edible! At the start of lockdown I thought I was going to learn lots of new things but it didn’t quite work out like that.

There was quite a lot of lounging around, playing video games, but I’m happy with that.

What was the first thing you did when lockdown ended?

I know lots of people are keen to get in the pubs but for me it was straight back on the golf course.

It’s one of my passions nowadays so I went out and played a couple rounds with my friends.

You were pretty much everyone’s childhood crush 10 years ago. What was that like?

It didn’t help my ego much. I was quite an arrogant person – it gave me a sense of entitlement.

Then, when you go into adulthood, you realise life isn’t as cushy as it is when you’re a kid. I had to become a bit more humble and change.

Your pick-up lines on Celebs Go Dating were iconic – has your love life seen a bit more success since?

I didn’t enjoy that show at all. I was struggling with a few things in my life at that time and it was possibly the worst thing I could have done. I had such bad anxiety about how I was going to come across.

I hated every minute of it and, yeah, my chat-up lines were kind of s***. I have
a girlfriend now who I love very much.

Watch Rocky Road live from Jermyn Street Theatre via stream.theatre on Friday and Saturday or watch on-demand from May 10 to 30.