What Warner Bros.’ onscreen universe of DC superheroes lacks in cohesion — the studio scrapped a strictly shared cinematic universe after its attempts to build one around the Justice League proved less than, well, super — it makes up for in unexpectedness.

Sure, the successes of Wonder Woman, Aquaman and Shazam! guaranteed continued installments in those franchises, but by not putting all of its DC eggs in one DCEU basket and branching off into one-off films and spinoffs — from the Oscar-winning Joker to original HBO Max streaming series — the future of DC’s onscreen heroes is essentially limitless.

With a laundry long list of titles that are reportedly in development — including Batgirl and Green Lantern — below, ET has compiled a complete guide to what you can expect from the future of DC.

After years of fans demanding Warner Bros. #ReleaseTheSnyderCut — the cut director Zack Snyder would have delivered had he not been forced to step away during production — it happened: Snyder’s definitive, four-hour version the film. “I want to thank HBO Max and Warner Brothers for this brave gesture of supporting artists and allowing their true visions to be realized. Also a special thank you to all of those involved in the Snyder Cut movement for making this a reality,” the director said in a statement.

The Suicide Squad of 2016 may be the most divisive film of the DCEU, but WB isn’t throwing out the baby with the bathwater and instead pivoting to a partial reboot, sort-of sequel titled, somewhat confusingly, The Suicide Squad. “It’s going to be a whole new thing,” Jai Courtney, reprising his role as Captain Boomerang, told ET. “There’s some familiar faces and some old friends and a whole bunch of new people as well.”

Find out more about The Suicide Squad. 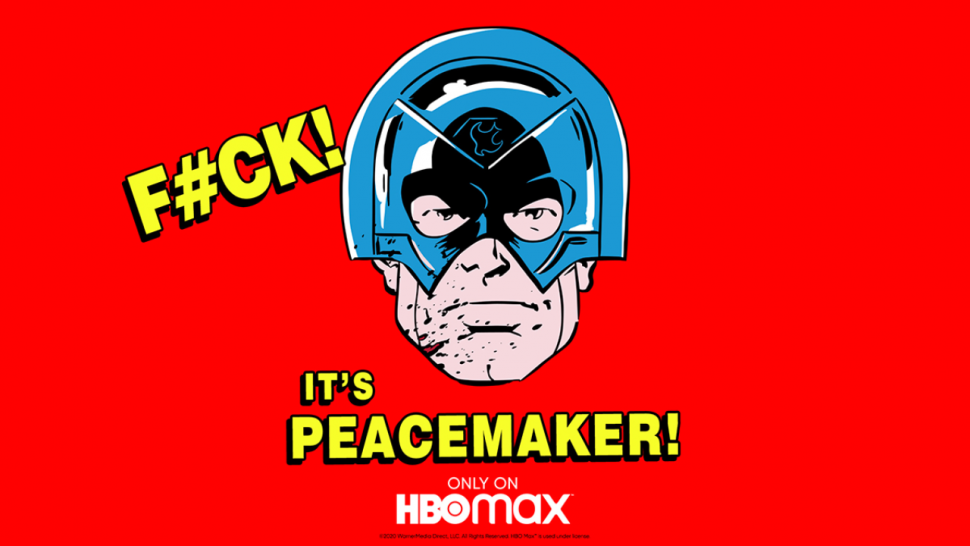 John Cena will make his DC debut as Peacemaker — “a douchey Captain America” — in The Suicide Squad before spinning off to his own HBO Max series. Gunn, who will write and partially direct the show, describes the character as “the guy who believes in peace at any cost, no matter how many people he needs to kill along the way.”

“Peacemaker is an opportunity to delve into current world issues through the lens of this superhero/supervillain/and world’s biggest douchebag,” said Gunn. “I’m excited to expand The Suicide Squad and bring this character from the DC film universe to the full breadth of a series.”

The Batman is a noir take on a younger Bruce Wayne, both as Batman, of course, and “the world’s greatest detective.” Robert Pattinson stars opposite a rogues gallery of Zoë Kravitz as Selena Kyle, Paul Dano as Edward Nigma and Colin Farrell as Oswald Cobblepot.

“[I’m telling] a version of Batman that isn’t about how he became Batman but about the early days of being Batman. He’s not perfect,” director Matt Reeves says. A string of murders will reveal the city is more corrupted than he could have ever imagined and inspire origin stories for the aforementioned villains.

“Selena isn’t Catwoman yet. That’s part of the journey. Oz isn’t the kingpin yet, he’s the Penguin and he doesn’t like being called that. The Riddle is just emerging for the first time,” he teases. Jeffrey Wright, meanwhile, will play Commissioner Gordon, with Andy Serkis as Bruce’s trusty butler, Alfred Pennyworth.

Find out more about The Batman. 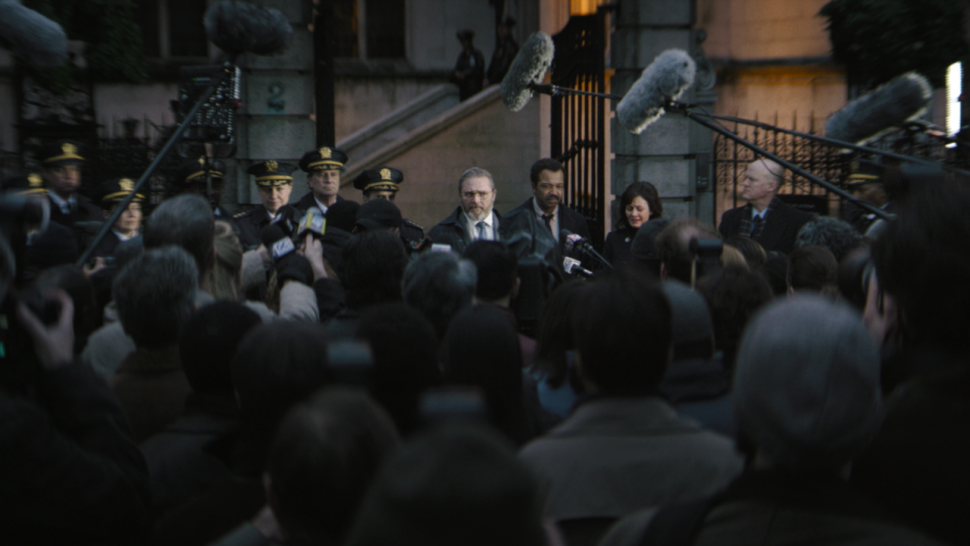 Warner Bros. will launch “a new Batman universe across multiple platforms” with an HBO Max companion series to The Batman. Overseen by Matt Reeves, Gotham P.D. will be showrun by Joe Barton (Giri/Haji) and explore the vast corruption within the city’s police department.

“The idea is we go back to year one and year one is the beginning,” Reeves has said. “It’s the first appearance of this masked vigilante that unsettles the city.”

There’s no word on whether Robert Pattinson or any of The Batman cast will crossover to the small screen, but Gotham P.D. will focus on characters “some of whom will touch on that you may have seen from the comics and others totally new,” Reeves teased. 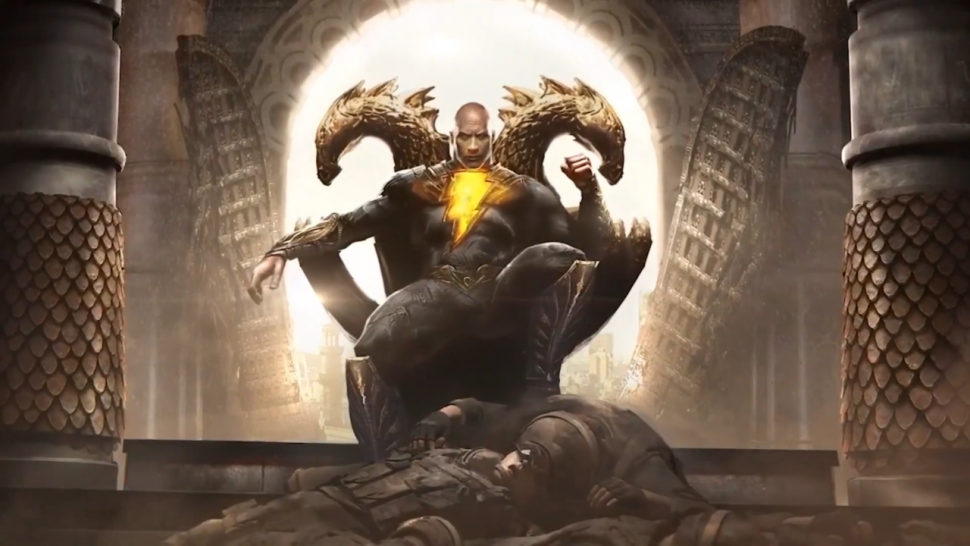 Dwayne Johnson, who served as an executive producer on Shazam!, fronts the origin story about Shazam’s longtime adversary. “Black Adam is blessed by magic with the powers equal to Superman, but the difference is he doesn’t toe the mark or walk the line,” Johnson wrote on Instagram. “He’s a rebellious, one of a kind superhero, who’ll always do what’s right for the people — but he does it his way. Truth and justice — the Black Adam way.”

Black Adam will explore his origins as a slave in Kahndaq more than 5,000 years ago, and in modern day, see him take on the Justice Society of America, comprising Aldis Hodge’s Hawkman, Noah Centineo’s Atom Smasher, Quintessa Swindell’s Cyclone and Pierce Brosnan’s Dr. Fate.

Find out more about Black Adam. 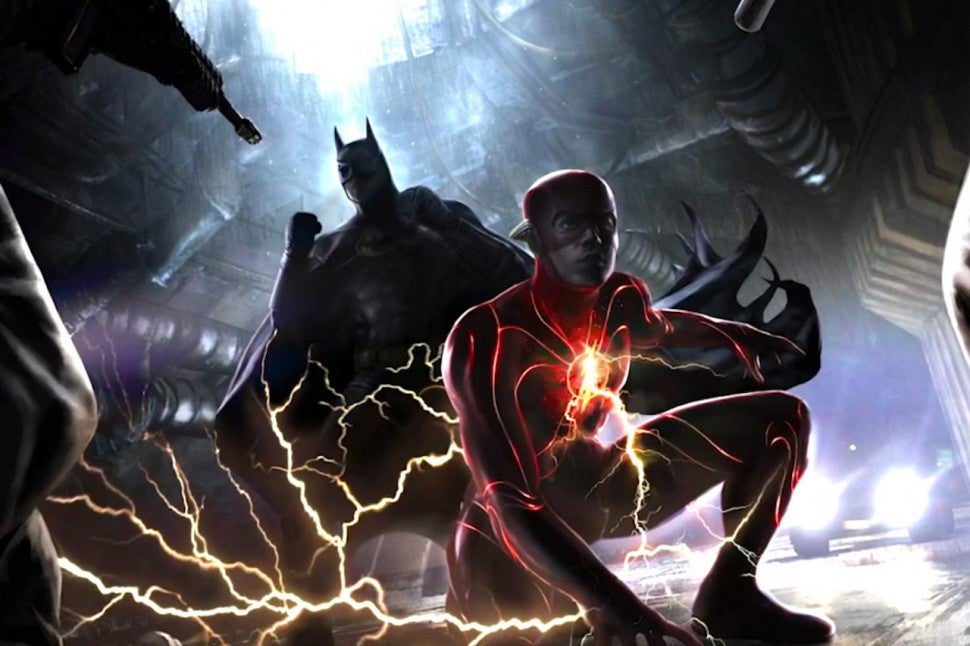 A standalone outing for Ezra Miller’s speedster has been in development for years but is finally making its way to the big screen with Andy Muschietti (IT and IT Chapter Two) directing from a script by Christina Hodson (Birds of Prey). “It’s a time travel story,” Muscietti teases of the Flashpoint-inspired film.

The film will see Miller’s Barry Allen racing through the multiverse, rubbing elbows with not only Ben Affleck’s Batfleck but Michael Keaton’s Bruce Wayne, too. (Keaton played the part in 1989’s Tim Burton-directed Batman.) After an appearance in Zack Snyder’s Justice League, Kiersey Clemons is back as Iris West, while Sasha Calle will play Supergirl and Ron Livingston and Maribel Verdú will play Barry’s parents.

“[It’s] the combination of giant spectacle action and fun with this incredibly personal intimate story of a boy who’s just trying to save his mum,” Hodson says.

Find out more about The Flash. 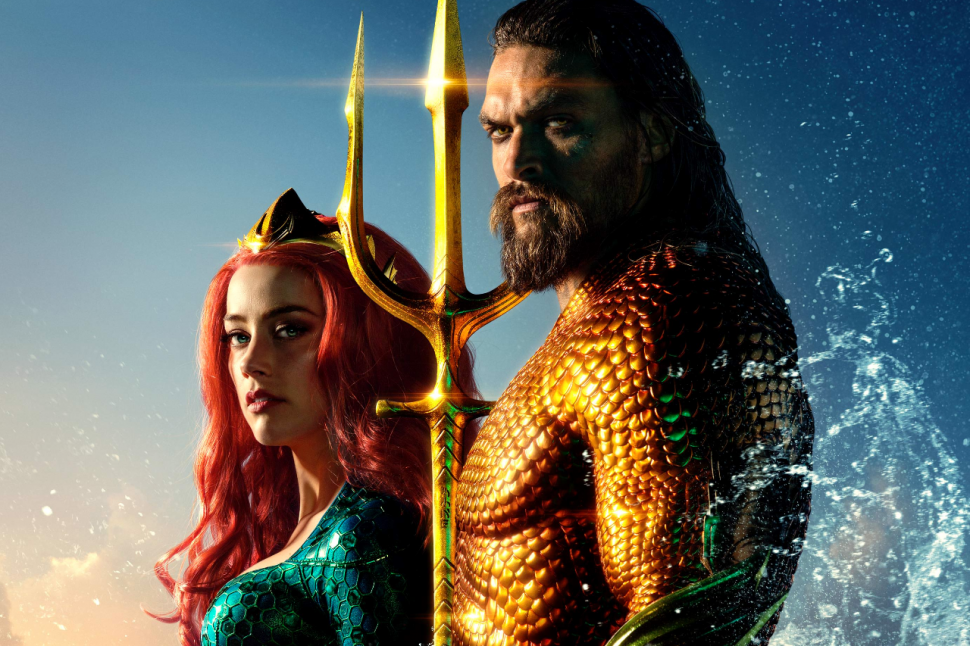 The only thing we know about an Aquaman follow-up is that it is happening. Screenwriter David Leslie Johnson-McGoldrick, who co-wrote the first, will reportedly pen the script and — presumably — Jason Momoa and Amber Heard will also return as Arthur Curry and Mera, respectively.

Beyond that, there’s no confirmation as to what story the sequel will tackle. (Though we know from the post-credits scene that Yahya Abdul-Mateen II’s Black Manta is still alive and looking for revenge.) “The second one is a little bit more serious, a little bit more relevant to the world we’re living in today,” director James Wan has said.

Find out more about Aquaman 2. 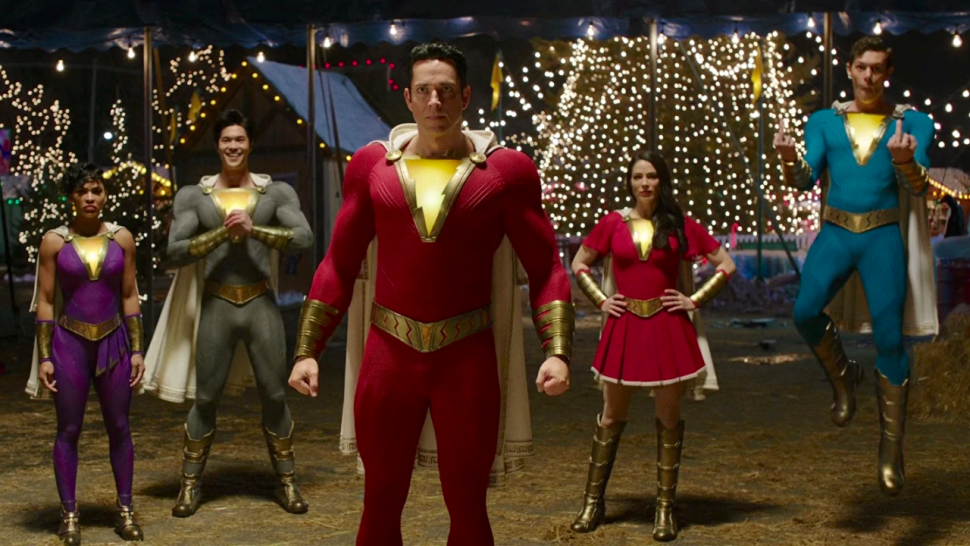 Considering the first film was a huge success, that shouldn’t come as too big a surprise. Specifics beyond that are vague: Screenwriter Henry Gayden is the aforementioned sequel writer, while director David F. Sandberg will return alongside the original cast.

Dame Helen Mirren joins the franchise as the villainous Hespera, the daughter of the god Atlas. “I am privileged to join the team of incredible artists who join together to create the wonder world of Shazam!” she told ET. “And it was my step son’s favorite as a kid. We have family photos of him dressed as Shazam from 42 years ago!”

Find out more about Shazam! Fury of the Gods. 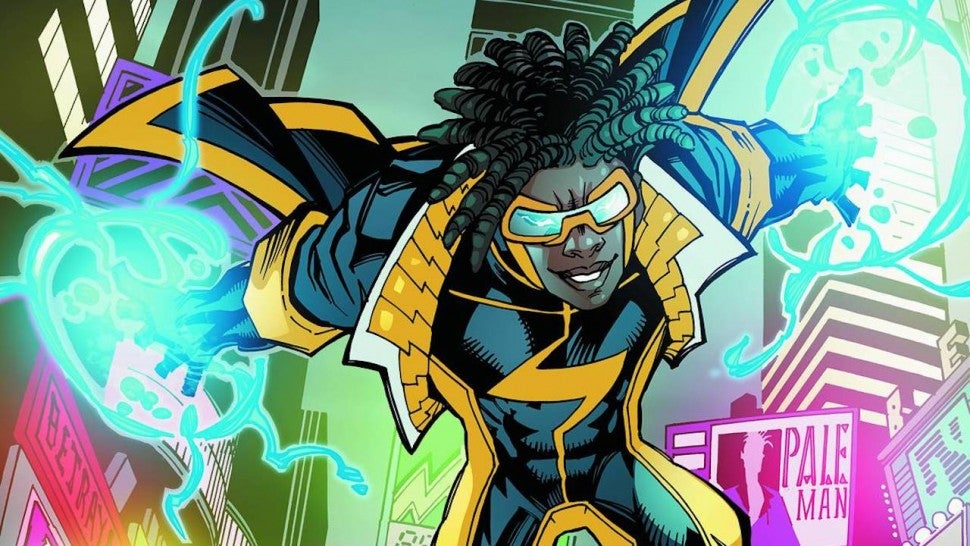 Warner Bros. tapped a Black Panther star to help usher in a “new universe centered around Black superheroes,” with Michael B. Jordan onboard to produce a film centered on the comic book character Static. “Our community deserves that,” said Jordan in a statement. Randy McKinnon (Safety) will write the script.

Static is Virgil Hawkins, a high school student who gains electromagnetic powers. The character has been part of the Teen Titans lineup and previously fronted his own animated series in 2000. 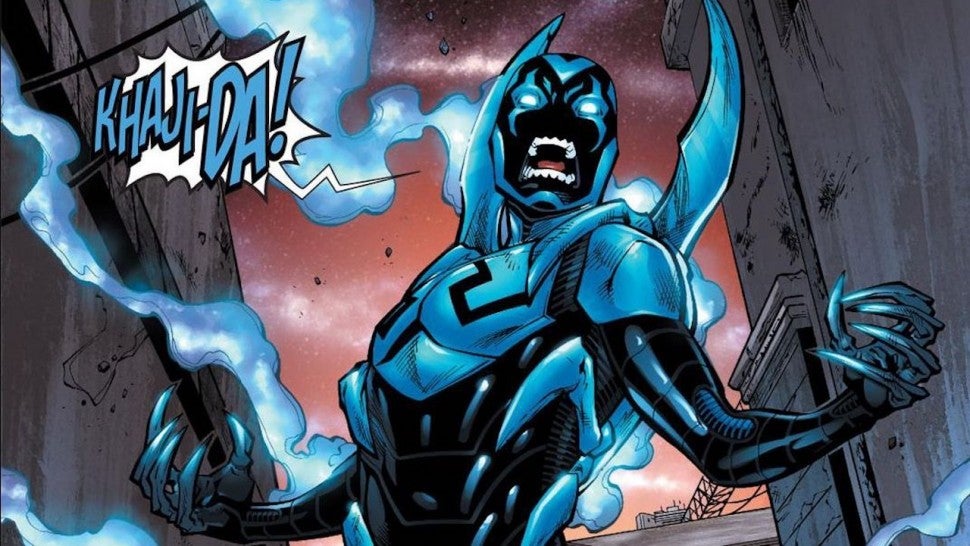 “It is an honor to direct Blue Beetle, the first Latino superhero film for DC,” Soto told TheWrap. “I want to sincerely thank everyone at Warner Bros. and DC for trusting me to bring Jaime Reyes to life. I can’t wait to make history together.” 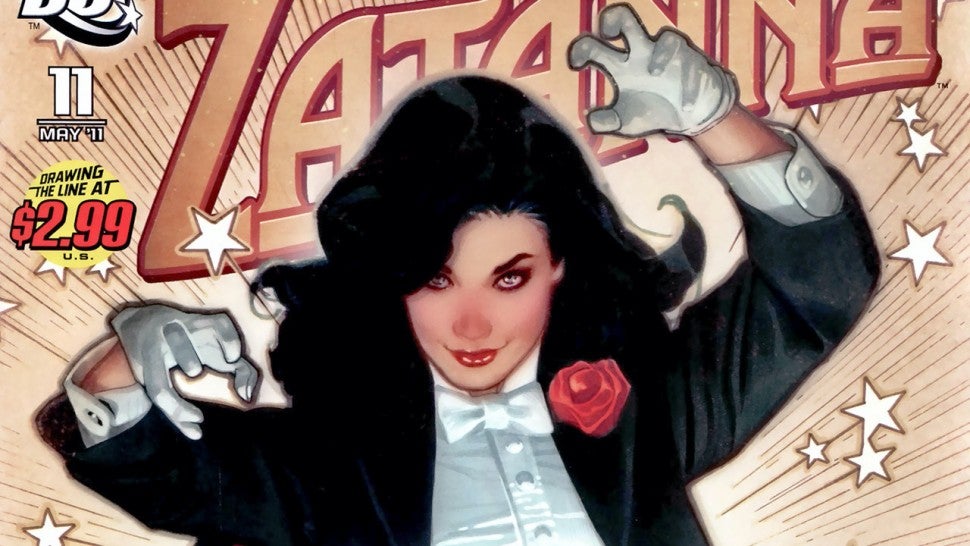 The DC cinematic universe is in desperate need of a promising young magician, and who better to bring her to the big screen than Promising Young Woman scribe Emerald Fennel, who signed on to script the project. (No word yet if she will direct.)

“It’s so exciting… We’re still in the early days,” Fennell told Variety. “You want to get the first bit right, which is the script, before you think of anything else. It’s a very specific thing — the world of superhero movies is incredibly exciting, but it’s also a new different challenge. The main thing for me is making sure that it’s really, really good. I’m such a genre fan. I’m a fan of witchcraft, magic, and comic books, and this is scary and intense.” 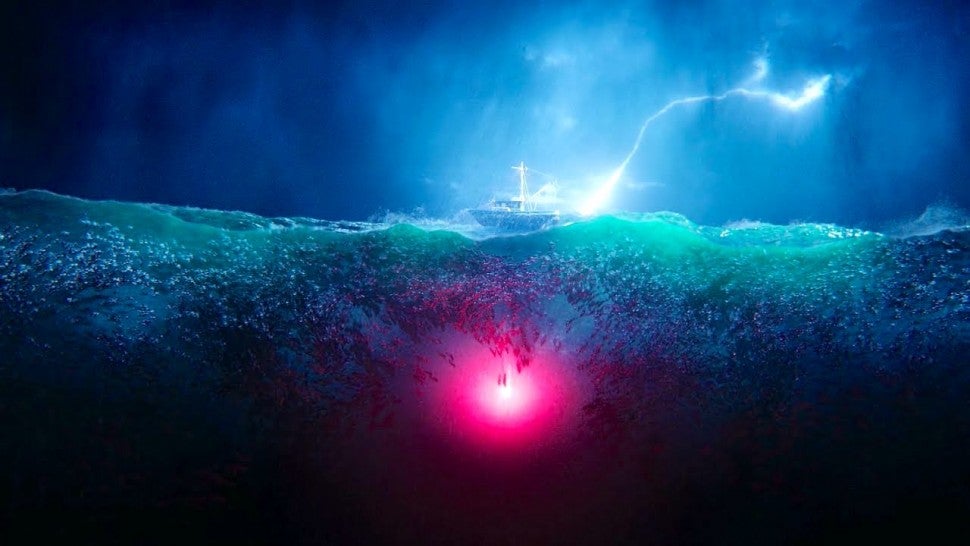 Banking on the success of Aquaman, WB set out to put a franchise in your franchise and turn the Seven Kingdoms of Atlantis into its own cinematic universe within a cinematic universe, starting with a “horror-tinged” spinoff centered on The Trench and the amphibious monsters who live in the deep. Alas, those plans have since been shelved.

“As part of our DC slate, some legacy development titles including New Gods and The Trench will not be moving forward. We thank our partners Ava DuVernay, Tom King, James Wan and Peter Safran for their time and collaboration during this process and look forward to our continued partnership with them on other DC stories,” Warner Bros. said in a statement. “The projects will remain in their skillful hands if they were to move forward in the future.” 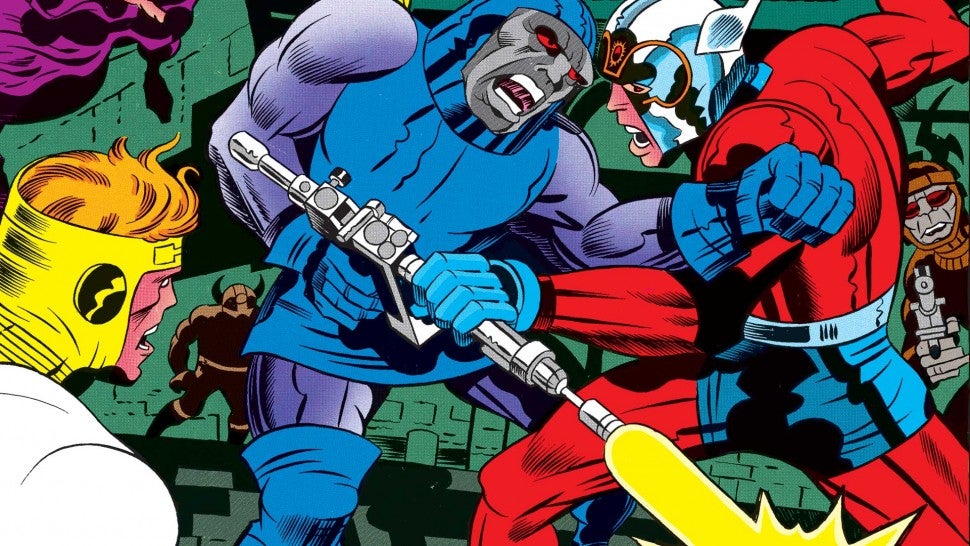 Not to be confused with Marvel’s upcoming Jack Kirby adaptation about eternal beings locked in an age-long war with their nefarious counterparts, New Gods was set to bring Kirby’s other saga of gods and monsters to a cinema near you courtesy of director Ava DuVernay and writer Tom King.

“Tom, I loved writing New Gods with you,” DuVernary tweeted upon news that it had been cancelled. “I’m upset that the saga of Barda, Scott, Granny, Highfather and The Furies ends this way. Diving into Kirby’s Fourth World was the adventure of a lifetime. That can’t be taken away. Thank you for your friendship. And remember… #DarkseidIs”

King replied, “Ava! I’m so incredibly proud of the work we did, it was such a joy seeing you bring your passion and talent to these characters. I really felt Kirby’s legacy was being honored here and I wish we could’ve kept going. That one Barda/Scott scene where…damn.”