This week on WandaVision, in the longest episode yet, Wanda and Vision dealt with an increasingly fuller house, while Monica and S.W.O.R.D. learned the facts of life inside “The Hex.”

As expected, “On a Very Special Episode” went totally ’80s, picking up with Wanda and Vision unable to soothe their crying twins. Even a bit of magic didn’t work! Yet just as they wonder if they need some help, who arrives but Agnes, making a pit stop on her way to Jazzercise to try out “a couple of tricks up my sleeve.” When Vision balks at Agnes laying hands on the newborns, it leads to an unscripted bit of awkwardness, where Agnes asks Wanda, “Do you want me to take that again? From the top?” Vision pulls Wanda aside to ask about the “strange” exchange he just witnessed, but Wanda shrugs it off — “Agnes is just being neighborly.” Then, when it sounds as if the babies have finally fallen asleep, their parents turn to realize Billy and Tommy are now toddlers. “Kids!” remarks Agnes. “You can’t control them no matter how hard you try.”

Cut to a cheesetastic, very ’80s opening theme song about how “Forces may try to pull us apart,” and how “we’re making it up as we go along… ’cause we got love.” 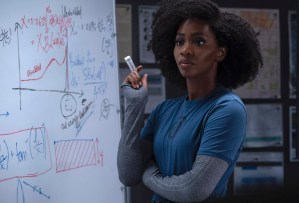 Back at the S.W.O.R.D. camp, Monica explains how when she first passed through the energy field surrounding “The Hex” (as Darcy has dubbed it), she felt pain, and then Wanda’s voice inside her head, and then a feeling, like, grief, that was holding her down, as if she were drowning. Acting Director Hayward then holds briefing based on the first-person intel, positing that Wanda is the principal victimizer to the thousands of people being held hostage inside The Hex. Angling to paint Maximoff as a “terrorist,” Hayward asks Jimmy if she has any alias/funny nickname (not yet, at least), and notes how she in the past used her powers against the Avengers.

When Monica contends that Wanda isn’t a terrorist per se, Hayward cues up video from nine days ago, of Wanda storming the top secret location where Vision’s corpse, with the intent to resurrect him — defying both the Sokovia Accords and the synthezoid’s living will.

Back inside The Hex, Wanda catches the twins bathing a puppy they found in the kitchen sink. Vision arrives wearing his human face, explaining that he had an inkling that Agnes was about to “pop over” bearing just the item they need (a dog house) — and sure enough, she does. When Vision scolds Wanda for sneaking in a bit of magic to make Sparky a collar, when Agnes’ head is turned, tension follows. “Usually we are of same mind, but right now …what aren’t you telling me?” he asks his wife. The moment is interrupted, though, when Billy and Tommy sprout to age 10!

Monica decides that she needs a 10,000-lb. fallout shelter made out of specific metals, to breach The Hex, and she knows just the aerospace engineer up for the challenge. When Jimmy and Darcy meanwhile note that Wanda must be using a massive amount of power to generate sets, wardrobe, all the hallucinations, Monica suggests that Maximoff could have taken out Thanos if he hadn’t called a blitz. Monica then take snortice of a photo of herself in the sitcom world, then rushes down the hall to where her groovy threads are hung up. She fires several bullets at the clothes, and realizes they are now 87% Kevlar. Wanda is rewriting reality permanently, she observes. So what happens if we send in something that requires no era-appropriate change?

Reporting for work at his 1980s office, Vision’s colleague Norm receives an electronic mail — from S.W.O.R.D.? It reads, “Top secret communique. Authenticate. Dr. Darcy Lewis’ findings regarding Maximoff’s anomaly. High levels of radiation at perimeter. Please advise.” The staff laughs it off as a prank, but Vision uses his powers to unearth Norm’s true personality — and he is confused, scared, and anxious about his family. “You have to stop her! She’s inside my head, it hurts so much!” he cries. “Make it stop!!!” Which a compassionate Vision does.

But who is she/her, I have to wonder….

Back at home, Wanda is trying to explain to the kids why Daddy is at work on a Saturday, when they are distracted by a noise outside. We then realize that S.W.O.R.D.  has sent in a drone made using 1980s technology, so it wouldn’t get transmogrified on its way into The Hex. “Wanda, this is Captain Monica Rambeau. We just want to talk,” Monica says through a speaker — though she is not heard in sitcomland. Just then, Hayward barks out, “Take the shot!,” having apparently secretly armed the drone with a missile. The signal is lost, and then a breach at the perimeter is detected, Teh agents rush out to the energy field to see Wanda, in her Avengers-style garb, pass through, dragging along their damaged drone: “Is this yours?” As Hayward hems and haws, Wanda makes clear, “This will be your only warning: Stay out of my home. If you don’t bother me, I won’t bother you.” Monica labors to remind Wanda that she is an ally, and that Wanda trusted her to help deliver her babies. Wanda coldly shrugs it off, saying she has everything she wants, “and no one will ever take it from me again.” She then uses a red ball to swivel all the rifles to aim at Hayward, as she returns inside The Hex. 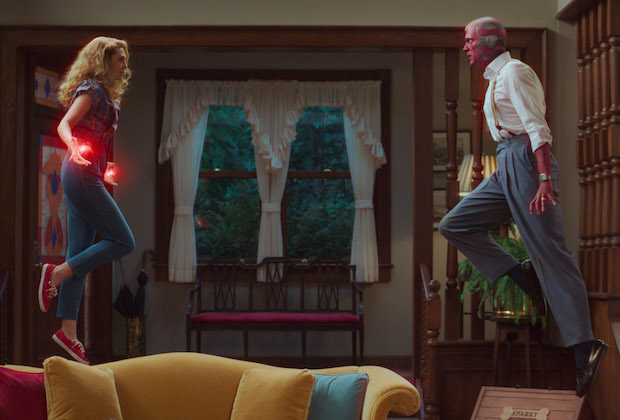 Cut to: a commercial for Lagos brand paper towels, “For when you make a mess you didn’t mean to.” (Lagos is the name of a city in Nigeria that has ties to both Agatha Harkness/Scarlet Witch storylines, and an X-Men storyline. Best I can tell!)

When Sparky the dig turns up dead (having eaten too many azalea bush leaves, Agnes tells us), the kids suggest their mom can “fix the dead,” but Wanda maintains that “there are rules in life. You can’t rush aging just because it’s convenient, and you can’t reverse death no matter how sad.” That night, Vision shares with Wanda that he unearthed Norm’s repressed, pained personality, before she could intervene.Wanda tries to run the end credits for the episode, but Vision argues, “No, we’re not done,” asking, “What’s the Maximoff anomaly?” Tensions run high between the marrieds, as they both float off the living room floor, appearing poised for battle.

“All of this is for us, so let me handle it,” Wanda says, but Vision demands to know,” What is outside Westview?!” “You don’t want to know,” Wanda says, before noting, “You never talked to me like this before.” “Before what?!” asks Vision. “I can’t remember my life before this.” Vision then points out that there are no other children in Westview, and Wanda contends that she is not in charge of everything, and she herself doesn’t know how any of this started. Just as Vision maintains that what Wanda is doing is wrong, the doorbell rings — not of her doing, Wanda insists — and both she and Darcy watching the monitors at S.W.O.R.D. are shocked by who it is.

It’s the X-Men movies’ own Peter Maximoff aka the mutant speedster Quicksilver (played by Evan Peters), waiting for a reunion hug from his “stinkin’ sister.” As Darcy observes, “She recast Pietro?!” And after a brief moment of confusion, Wanda hugs her “other” brother.

Want scoop on WandaVision, or for any other show? Email [email protected] and your question may be answered via Matt’s Inside Line.