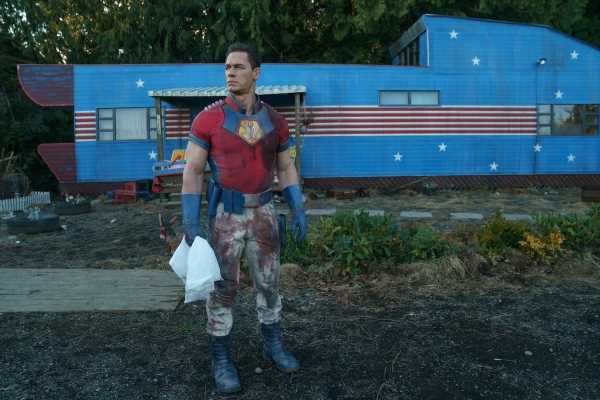 Products featured are independently selected by our editorial team and we may earn a commission from purchases made from our links; the retailer may also receive certain auditable data for accounting purposes.

After The Suicide Squad hit theaters last year, fans were immediately enraptured by John Cena’s breakout performance as the anti-hero Peacemaker — and so was James Gunn, the director of the movie (who’s also directed Marvel’s Guardians of the Galaxy movie series).

This quickly led to Cena getting his own HBO Max show titled Peacemaker which will give fans a chance to learn more about the character’s motives and follow him along on a gore-filled comedic journey, similar to what we loved about The Suicide Squad movie.

Excited to watch Peacemaker online when it premieres on HBO Max? Here’s everything you need to know about the latest HBO Max series.

Peacemaker makes its debut on Thursday, January 13 and you’ll be able to stream the first three episodes exclusively on HBO Max. After its premiere, a new episode will be released every week on Thursdays till the series finale on February 17th.

There are eight episodes total and each episode is expected to run around 40 to 45 minutes, though Gunn claims that episode times vary throughout the series.

How to Watch Peacemaker Online

Peacemaker is set to release exclusively on HBO Max, which means the only way to watch Peacemaker online is to get an HBO Max subscription, which will give you access to not only every Peacemaker episode as it releases, but also let you binge other DC Comics content like The Suicide Squad, Harley Quinn, Wonder Woman and more.

An HBO Max subscription starts at $9.99/month (14.99/month for ad-free) and will let you binge Peacemaker as many times as you want. Make sure to grab a subscription right now so you’re all set for Peacemaker’s release this Thursday. You can pick up an annual plan to HBO Max too which saves you about 16% a year.

If you want to stream Peacemaker in the U.K or in India, you’ll unfortunately have to wait for the show to become available in your country; Gunn says his team is actively working on it.

How to Watch Peacemaker Free Online

HBO Max does not offer free trials like some of the other streaming services. That said, AT&T customers are able to get HBO Max free which means you’ll be able to watch Peacemaker free with certain phone, cable and Internet plans. If you’re already an AT&T customer, click here to see if your current plan qualifies for this perk. If you’re a new customer, you can get AT&T starting at $50 with HBO Max included.

You can also get access to ad-supported HBO Max if you’re signed up to the $60/month Cricket Wireless plan, so you’ll be able to stream Peacemaker for free and cast it on your TV, phone or tablet through the HBO Max app.

How to Watch Peacemaker on TV

If you want to watch Peacemaker on TV, you’ll be able to find the show on HBO (available through most premium cable packages like this one from Verizon Fios).

How to Watch The Suicide Squad Movies

John Cena’s Peacemaker made his first on-screen debut with The Suicide Squad and if you didn’t get a chance to watch this DC flick yet, you’ll be able to stream it through HBO Max as well.

The Suicide Squad is also available on Amazon for $19.99 for the HD version. You can also purchase the DVD, Blu-Ray or 4K version starting at $16.99 right now.

Peacemaker starts streaming this Thursday on HBO Max so make sure your subscription is active so you can watch John Cena in his new lead role the second it releases.