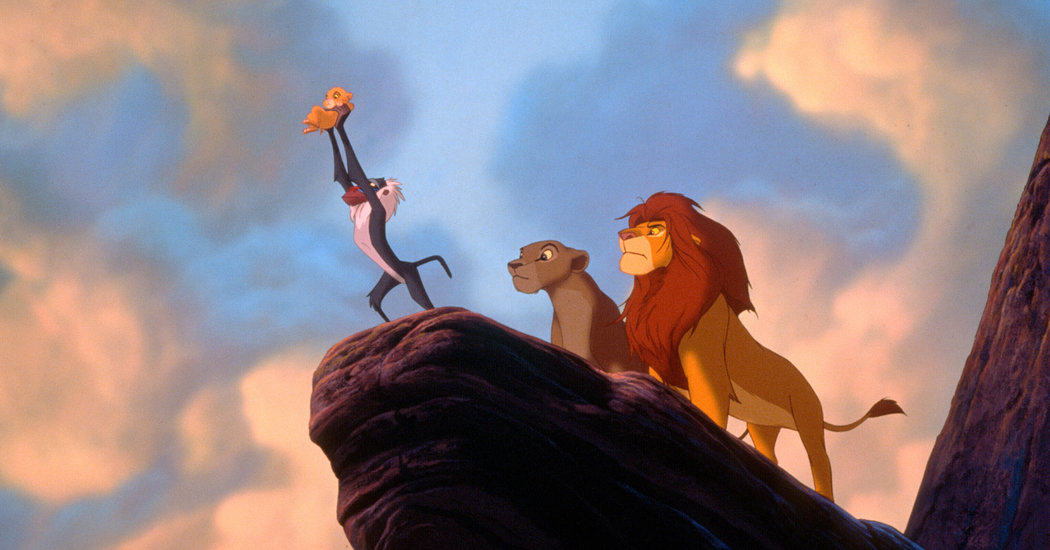 Few animated films have charged onto the screen with the confidence of Disney’s 1994 smash “The Lion King.” Eschewing opening titles, a giant red sun rising over the Serengeti filled the screen, as the soundtrack blasted the majestic opening song, “The Circle of Life.” The anthem of birth and death gathered intensity as giraffes, elephants and zebras assembled to witness the presentation of the newborn lion, who was held aloft as the music swelled; the zebras stomped, the monkeys whooped, and the sun shone down upon the cub.

That opening sequence — so iconic that the teaser trailer for Jon Favreau’s new “Lion King” remake is, in effect, a shot-for-shot recreation — is a kickoff of such brashness and bravado, feverish anticipation and enthusiastic reception, that it’s easy to read as a metaphor for “The Lion King” itself, one of the most profitable and culturally inescapable films of the 1990s. It’s also easy to forget that at the time of its release a quarter-century ago, this was one of the riskiest ventures of Disney’s history, and it was met with some resistance. But “The Lion King” would not only change the way Disney did business, but also contribute to a shift in the industry itself. 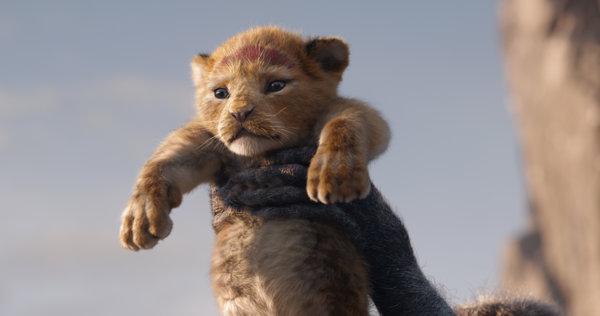 Under the guidance of the chief executive Michael Eisner and the motion picture division head Jeffrey Katzenberg, the studio had bounced back from a period of borderline irrelevance in the 1970s and 1980s. The so-called Disney Renaissance began with 1989’s “The Little Mermaid” and continued with “Beauty and the Beast” in 1991 and “Aladdin” the following year, a series of critical and commercial successes that achieved three important goals: They reminded audiences of the power and beauty of the studio’s classic animation style; they integrated catchy, original songs with a deftness rarely seen outside Broadway theaters; and they drew in adult audiences, which had long treated Disney animation as a “for kids only” proposition (there weren’t many couples taking in “The Great Mouse Detective” or “The Fox and the Hound” on date night).

But for “The Lion King,” the studio was, mostly out of necessity, breaking from the traditions of its predecessors. Howard Ashman and Alan Menken, the stage composers whose songs had given those pictures such vivid life, were unavailable; Ashman had died during the production of “Aladdin,” and Menken was working on the studio’s 1995 release, “Pocahontas.” The directors responsible for those features were likewise committed, leaving those duties to a pair of first-timers, Roger Allers and Rob Minkoff.

They weren’t the only gambles. This was the first Disney animated feature populated solely by animals; even “Bambi” featured a world that humans touched, and occasionally infringed upon. And unlike that film, the traumatic death at the center of this story would occur onscreen.

Chanciest of all (especially for a studio that has become, in the ensuing years, even more concerned with brand familiarity), this was the first Disney property not based on existing material — though it wasn’t hard to trace its inspirations. “It’s a combination Moses-Hamlet-King Arthur Meets Elton John in Africa,” the producer Don Hahn told Premiere magazine (“half in jest,” according to the reporter, Ari Posner).

The picture had a difficult birth, first envisioned, by the original director George Scribner, as a serious-minded, noble nonmusical titled “King of the Jungle.” The success of Disney’s Renaissance films turned it into a light, comic, pop-tinged musical, and the studio was willing to do whatever it took to make the music work without Ashman and Menken.

When Ashman fell ill during “Aladdin,” the Broadway lyricist Tim Rice had stepped in, and he was drafted for “The Lion King.” He told Premiere, “They asked me who I wanted to work with, and I said, ‘Elton John would be great, but you won’t get him.’ But they did.” John’s involvement gave the picture a boost in credibility, a marketing hook, and (most profitably) a 10-times platinum soundtrack album.

When the time came to put the film into theaters, Disney took one more risk: a summer release. Its three previous hits had all come out during the year-end holidays, an ideal window for pictures intended as family outings. A summer release could be eaten alive by the adult and teen fare typical of that season. Summer 1994 promised Arnold Schwarzenegger in “True Lies,” Keanu Reeves in “Speed,” Harrison Ford in “Clear and Present Danger” and Tom Hanks in something called “Forrest Gump.”

So the studio’s unparalleled marketing machine went to work, with a monthslong ballyhoo campaign of breathless behind-the-scenes reports and all-access press events. The hype took. Reviews were positive, and box office was astonishing; its $42 million opening weekend more than doubled predictions. Within six weeks, it had eclipsed “Aladdin” to become the studio’s highest-grossing feature to date at the domestic box office, and it would replicate that feat worldwide in the fall. Back home, Disney decided to pull the film from theaters at the end of September, and rerelease it in late November, to bring in more bucks over the holidays. When it hit home video the following spring, it became the best-selling VHS tape in history.

Over the next quarter-century, “The Lion King” would be referenced by everyone from Chance the Rapper to Titus Andromedon on “Unbreakable Kimmy Schmidt.” Yet for all the enduring affection and nostalgia, it’s worth noting that the movie’s march toward cultural ubiquity was also dogged by controversy. (Conversations about problematic art didn’t begin with Twitter, you know.) Concerns over the considerable amount of violence and terror in the G-rated film raised alarms for parents and educators within days of its release; adults were genuinely asking whether it was safe to take their children to see the latest Disney movie. (Judging by the grosses, many seem to have decided it was.)

But as the summer wore on, more questions were raised. “The movie is full of stereotypes,” the Harvard psychologist Carolyn Newberger said at the time. “The good-for-nothing hyenas are urban blacks; the archvillain’s gestures are effeminate, and he speaks in supposed gay clichés.” The writer Janet M. Walker, of the New York Amsterdam News, likewise criticized the “Sambo-ish hyenas,” and noted that while James Earl Jones and Madge Sinclair, two actors of color, voiced the king and queen of this African narrative, Simba was voiced by the white actors Jonathan Taylor Thomas and Matthew Broderick.

Jones shrugged off the question, explaining to Premiere: “There’s no reason to cast only Africans. I’m no more African than Jeremy Irons is, quite frankly.” The official word from the studio was even more blunt. “It’s a story. It’s fiction,” the Disney spokeswoman Terry Press said. “These people need to get a life.”

An unsigned editorial in The Wall Street Journal cheered on Press (“A good idea, that”) while sneering, “For the ideologically devout, there are, it is clear, no summer vacations.” But the critics were not wrong. It is bizarre to hear Thomas and Broderick veer into “Def Comedy Jam”-style “white people talk like” tones to play an African prince. There is something discomforting about the way that such a character is pitted against the hyenas voiced by a decidedly othered Whoopi Goldberg and Cheech Marin; the entire elephant graveyard sequence is barely less subtle than the “lost in the ghetto” scene in “National Lampoon’s Vacation.” And while Irons’s evil Scar doesn’t have the clear camp overtones of, for example, Ursula in “The Little Mermaid,” he certainly feels of a piece with mainstream cinema’s troubling history of prescribing queer qualities to villainous characters.

Disney might have scoffed in 1994, but the studio had to know times were changing; it had just gone through a quiet public relations flap over anti-Arabic lyrics in “Aladdin,” which had been altered for that film’s home video release. In the years that followed, the company would rarely treat similar concerns with such dismissiveness. Disney films became more culturally sensitive and inclusive; within a few years, audiences would get their first Native American, Asian, African-American and Polynesian Disney princesses.

“The Lion King” itself was done no harm by the controversies, of course (nor subsequent whispers about another, unattributed source for its story, nor that popular rumor of subliminal messaging hidden within). It has had one of the healthiest afterlives of any Disney property, spawning not only that best-selling (and still-selling) soundtrack, but also tie-in merchandise, rereleases (for Imax in 2002 and 3-D in 2011), and a Tony Award-winning, record-breaking Broadway stage adaptation. And then there is the new remake — in which Simba (and Nala and Scar) are all voiced by actors of color. Sometimes these things just take time.

Aside from its own products, “The Lion King” contributed to a new sense of commercial aspiration among major studios in the mid-1990s, as one of a handful of films (along with “Jurassic Park,” “Forrest Gump,” “Independence Day” and finally, “Titanic”) that earned the kind of money “Star Wars” had in the 1970s and “E.T.” in the 1980s. They proved that films like that weren’t occasional cultural outliers, but the kind of successes that could be delivered every year, if they were engineered carefully enough. And that may be why the new “Lion King” feels like such an empty exercise. It’s a painstaking, meticulous recreation, so carefully calculated to capitalize on familiarity and good will, that it cannot reproduce what made the original film special: a sense of freedom, spontaneity and, above all, risk. 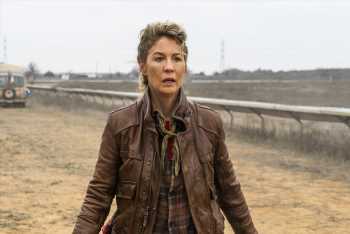 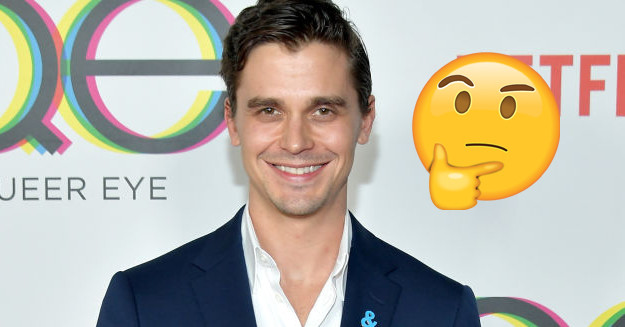 Next post Sooooo….Antoni Porowski Only Washes His Hair Every Two Weeks And I Don't Know What To Think Of That
Related News
Lifestyle
Recent Posts